On a Global Mission, The Automobiles of General Motors International, Vol. 1 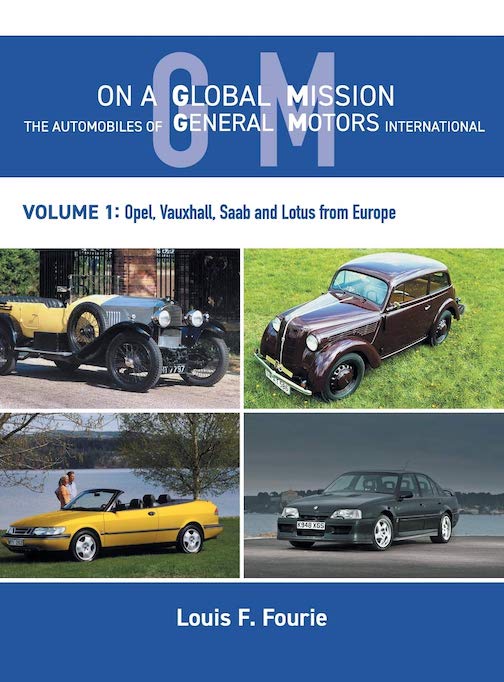 There is nothing that comes even close to being comparable to these books because, quite simply, no one before author Louis Fourie has gathered, much less written about, The Automobiles of General Motors International. The complete title of this three-volume set is On a Global Mission, The Automobiles of General Motors International. It is a seminal work in every respect. From your perspective you’ll appreciate knowing that each volume can be purchased individually. For those opting for all three in a single purchase, there’s an additional saving over the already extremely reasonable individual volume prices.

This commentary shares details about the first volume. As the subtitle says, it covers Opel, Vauxhall, Saab and Lotus from Europe. Subsequent postings will tell—and show you—about the other two volumes. Each is hardbound and filled with eminently readable and generously illustrated text. Then there are the tables, charts, and statistics that give readers history in detail that no other books have previously attempted, much less actually accomplished.

Adam Opel, followed by his five sons and then their sons, begin this first volume by recounting the establishment of their firm and their early motorcars and -bikes. As with many of the early motoring manufacturers, Opel was an active competitor in sporting events for racing, rallying and successes in these trials did indeed draw the attention of potential customers resulting in sales.

World War I challenged its very survival leading the Opel brothers to “let it be known to James Mooney, the president of GM Export Company, that they would entertain offers.” Once Alfred Sloan had personally visited and toured the acquisition process began “creating Adam Opel A.G.” with “the term A.G. refer[ing] to Aktiengesellschaft or Joint Stock Company.”

The machinations of being an American company operating in Germany during the years leading up to World War II make fascinating reading. Then postwar, of course, car-making the world over went into hyperdrive with Opel no exception. Particularly notable was a stylish mid-60s Opel two-seater called simply the GT. Fourie writes “Bob Lutz was part of the marketing team during the unveiling of the GT concept. He recalled . . . that the appealing shape of the Opel 2-seater was not the only sight his eyes feasted on. A cute young lass in a silver jumpsuit caught his attention. Somehow it is fitting that a car-nut should meet his future wife at a car show.” 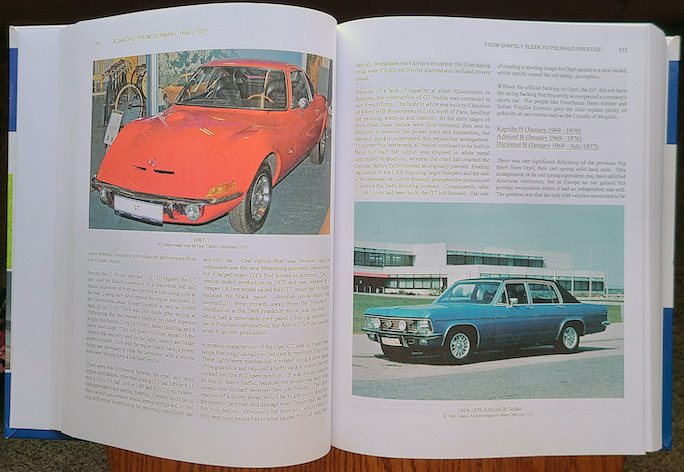 Opel became available to American purchasers late in 1950s to mid ‘70s mainly offered by Buick dealers. Models especially prized by collectors today are the GTs (on left in above image with an Admiral on right), Mantas (on facing pages below) and Kadetts. 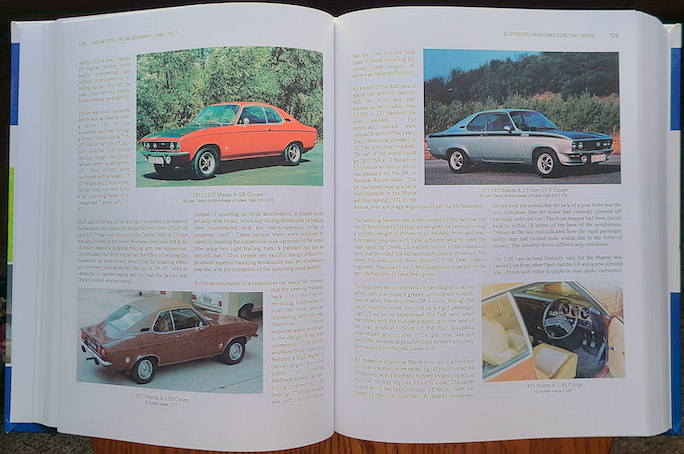 “Global Designs from Opel 1973–2014” are addressed in a separate section with, despite the title, coverage actually going two years beyond. An additional chart that is especially illuminating delineates which engine was utilized in which makes/models and in what years is included. This nearly 200-page segment brings home just how global the marketplace became with Opel-developed cars bearing a variety of badges other than Opel and sold around the globe. As examples, cars that were essentially Opel Kadetts wore badges and names such as Chevrolet Chevette in several countries, Pontiac Acadian in Canada, and in the US Pontiac T1000. In the 1980s what Opel developed and offered as its Ascona wore the badges of nine different marques, more than any other contemporary car from any manufacturer, before or since.

Vauxhall, Saab, and Lotus sections are organized in similar fashion with each company’s history discussed first. Then charts and tables follow listing all the senior staffs of management, design, engineering, and other key functions and providing the years each served in those roles. The next pages contain product specifications and, all important to collectors today, production numbers. Below is a page pair from the Lotus segment so you get a taste of how detailed those tables and charts are. 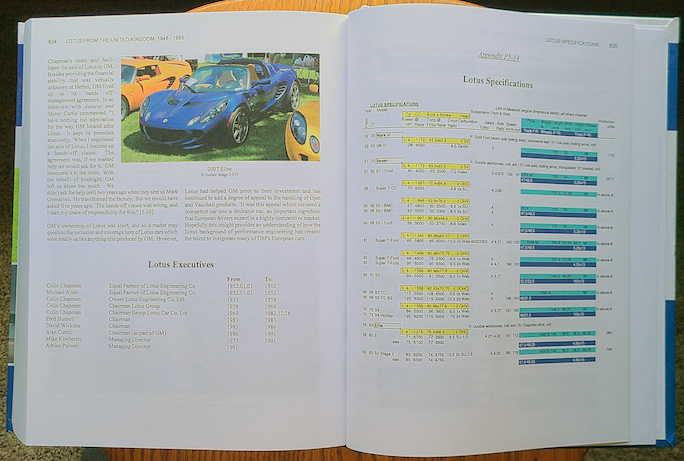 As will be shared in the next two postings commentating on the second and third volumes, Louis Fourie, the author and publisher, approaches his subject with the sagacity of the industry insider he is and was throughout his entire career (he joined GM Overseas Operations in 1968). As relevant is that both before and since retiring, he is as automotively-oriented as a person can be including owning/restoring and driving his several collectible vehicles. But it’s his observant and analytical approach to the industry with which he’s been fascinated and deeply involved in throughout his entire career that place what he’s penned and produced apart from and above the norm. These books are, in your commentator’s opinion, destined to be respected, consulted, and shelved right alongside Beverly Rae Kimes and Austin Clark’s Standard Catalog of American Cars.

On a Global Mission, The Automobiles of General Motors International

This is a print on demand book and must be purchased from author/publisher via email: L4ie@telus.net or by phone 604.922.0421 (Pacific time zone)