Zoom, The Global Race to Fuel the Car of the Future 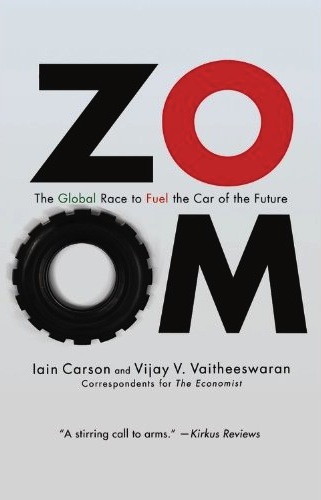 It is pretty clear that something has to change. The system of transportation that we have developed over the past 100 years—the one that is dependent of infinite amounts of cheap energy and two or even three new cars in every garage is coming to an end in the not too distant future. So two correspondents for The Economist wrote a book, Zoom, that “offers a lucid and visionary portrait of what that future can be.” That would be fine if only the book delivered upon its promise.

The premise of Zoom is that a world without cars “would be a dim, joyless place with much-diminished freedom, mobility, and prosperity.” Clearly, the authors view cars as the epitome of transportation success. The real problem, according to the authors, isn’t cars but rather what powers them. Oil. The authors spend the first third of their book describing how big oil and the big-three car companies, sometimes working together and sometimes at odds, have proceeded to build a transportation infrastructure that produces pollution, congestion, greenhouse gases, and social upheaval.

The second third of the book, carrying a title “Can Dinosaurs Dance?” tells the story of the Toyota Prius and goes on to discuss how corporate America and big business are now on board with climate change and the need for green energy solutions. The last part of the book is perhaps the most interesting in its insistence that the same kind of idiosyncratic forces that brought us the Internet and personal digital devices will come to our rescue to “develop the clean fuels and smart cars of tomorrow.”

The problem with the book is that it is long on everything you’ve already heard from any number of sources and short on anything new or revealing. Although the authors traveled to Asia and Europe and many places in between, their reportage is so filled with clichés and other people’s talking points that it fails to provide much more than a quick Wikipedia search would give you. That’s unfortunate as more recent events (that admittedly transpired after the 2007 publication date of this book) such as the global financial meltdown and subsequent implosion of the domestic auto industry have shown that, as much as we may be in love with them, cars might not be the best of all solutions for optimum personal and social mobility as we move into the 21st century. Had the authors of Zoom, even back in 2007, looked just a bit more critically at what function the automobile serves, they might have found a different answer than simply keeping cars.

(NOTE: Reviewer Kevin Clemens is the author of The Crooked Mile: Through peak oil, biofuels, hybrid cars, and global climate change to reach a brighter future.)

Posted Under: Automobiles, Technology | Author: Kevin Clemens | No comments yet