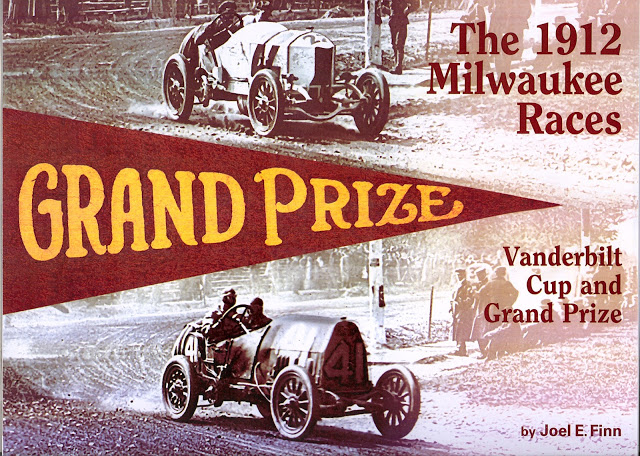 This book is representative of what one has come to expect from Joel Finn and Racemaker Press. This is meant as high praise given that the research and writing by Finn and the production values of the book itself from Racemaker Press are of the highest order. It is an excellent and long overdue book.

In the Introduction, Finn relates how, kept from racing at Road America by rain, an afternoon in 1972 visiting antique stores instead resulted in acquiring two albums of photographs and materials from the Vanderbilt Cup and Grand Prize races held in Milwaukee in 1912. Many of the illustrations in this book, published during the races’ centenary year, come from that vintage material.

The 1912 Milwaukee races are usually remembered—when they are remembered at all—for things that seemed to go wrong: poor racing, accidents that could and should have been avoided, inept organizers, and inadequate crowd control among other things. Finn challenges that general assertion, pointing out that heavy rains that forced a two-week delay due to extensive damage to the course added unanticipated expenses that the promoters, the Milwaukee Automobile Dealers’ Association (MADA), had to shoulder on top of all the expenses necessary to conduct the events scheduled. The impact on attendance by the delay was certainly a factor that the MADA had to deal with in the aftermath of the event. That the event is usually remembered for the death of David Bruce-Brown and the serious injuries suffered by Ralph De Palma also tends to darken the image of the races.

Finn does an excellent job of sketching out, literally, the road to the 1912 Milwaukee races. The relationship—such as it was by 1912—between the Automobile Club of America (ACA) and the American Automobile Association (AAA) and its Contest Board is deftly summarized in a few pages, along with the often overlooked influence of the automobile manufacturers regarding the American automobile racing scene by the 1912 season. Finn also takes the time to outline the major components of the Contest Rules of the AAA Contest Board, something that few others bother to do.

The book covers the creation of the circuit used for the Vanderbilt Cup and Grand Prize, which is a fascinating story in and of itself, the MADA being involved in a bit of subterfuge regarding the site originally intended to host the races.

The premier drivers involved are profiled by Finn; many of these gems bring drivers to the attention of the reader that are often relegated to footnotes: Spencer Wishart, Gil Anderson, and Hughie Hughes are scarcely household names today but Finn gives them their due. It is this attention to the nuances and context of the events that make this book a delight for both the general reader and the automotive historian.

It should be noted that although the Vanderbilt Cup (the full title is the “William K. Vanderbilt, Jr. Cup”) and the Grand Prize (the full title is the rather awkward “Grand Prize for the Gold Cup of the Automobile Club of America”) were the headline events for the Milwaukee races. The other two events on the schedule, the Wisconsin Motor Trophy and the Pabst Blue Ribbon Trophy, are not neglected.

The coverage of the Vanderbilt and Grand Prize events is greatly enhanced by photographs that are nothing short of exceptional (the book is landscape 9 x 12″). Indeed, the photos found in the book are often extraordinary, many being restored to near pristine quality, something for which we should be very grateful.

The coverage of the aftermath of the races in Milwaukee is not neglected. For this alone Finn is to be commended. The trials and tribulations of the MADA once the races ended is covered well and should serve as an example as to how to summarize what was a very messy situation at best. That it was not until February 1914 at Santa Monica that Ralph De Palma finally received his prize money for winning the Vanderbilt Cup is an oft-forgotten part of the problems the promoters faced in dealing with the debt that they incurred by hosting the races.

A minor quibble with one item in the book: Although De Palma crashed on the final lap of the Grand Prize race, he was listed as retiring from the event. Finn offers a note stating: “Based on distance covered, De Palma was later classified as finishing fifth.” This, however, was not the case until statistical revisionists meddled with the results many, many years later! No contemporary accounts list him as finishing the race distance, a requirement to be listed as a finisher for an event. That De Palma crashed on the last lap was irrelevant: he did not complete the race and did not cross the finish line under the checkered flag. Two entries—the George Clark Mercedes and the Joe Horan/Bob Burman Benz—were still running when the final finisher, Barney Oldfield, was given the checkered flag as the last finisher. Both Clark and Burman were “flagged”—meaning that although they were still on the course and running, they were unable to complete the full race distance, for whatever reason. This also meant that, with rare exceptions, they would not receive any prize monies being offered. In this case, the $500 in prize money for fifth place was not awarded to either Clark or De Palma. Yes, something of a quibble, but it is odd that Finn does not make this clear, just as it is odd that he accepts the obviously anachronistic idea of De Palma placing fifth.

This is an excellent book and a great addition to the all-too-thin bookshelf of titles that deal with the history of American racing. Joel Finn and Joe Freeman of Racemaker Press are to be thanked for providing us with such an outstanding book. No Index.

A footnote for readers with crossover interests:

The Grand Prize race is thought to be the first race to be photographed from the air; an aerial shot of the Start/Finish line and the Wright Flyer approaching the track are included.