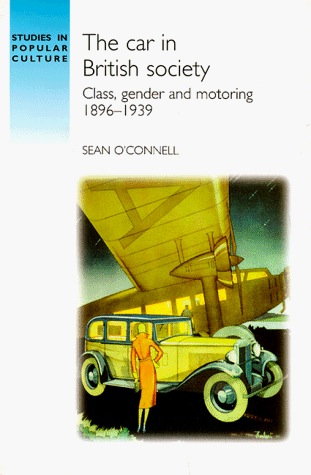 Books by academic publishers, by their nature, are aimed at an audience that is presumed to be knowledgeable about the topic and the literature. What such books may lack in “eye appeal” they more than make up in state of the art thinking and often excellent writing. Written for peers as much as students, a writer can’t get away with simply parroting platitudes instead of putting sound, original work on the table. O’Connell’s book is that kind of high-caliber gem that restores one’s faith in the institution that is higher education. The gem analogy works on several levels: the book is small, dense, brilliant and multi-faceted—and pricey

If the book had to be distilled into a soundbite one could say it examines the ways in which beliefs about gender, consumption and technology influenced motoring and the motorcar. If that strikes you as contrived, pause right there and think for a moment about life as you know it. As egalitarian as we like to think of ourselves in this “enlightened” age, factors like social context and (although we would be tempted to angle for a less harsh and more ambiguous term) class perceptions and tastes shape our attitudes toward cars and car ownership now just as they did in 1896–1939.

Understanding how we got to where we are is thus a worthwhile endeavor. O’Connell’s book is as close as most of us will come to raw, fresh, first-hand “in the trenches” research. His excavation of primary sources, oral interviews, and grasp of the subject matter will make his book the kind of benchmark book that other books will quote for years to come.

It provides fascinating insights into the spread of car ownership, the role of the second-hand car market, the “shame” and stigma of buying via hire-purchase (leasing, in other words), the nature and pattern of leisure, the formation of car clubs, and the many ways in which the car is not only a product of society but itself shapes society.

The latter aspect is most poignantly illustrated by the author’s point that “The agency that gender came to have in shaping ideas about car use has ultimately prevented millions of women from taking to the driving seat.” One of the very pillars of the motoring community in Great Britain, John Scott Montagu (a RAC founding member and the later 2nd Baron Montagu of Beaulieu, home of Britain’s National Motor Museum today) plays a critical role—one is retroactively embarrassed to read of the blatantly patronizing attitudes towards not just women drivers but women in general, for instance their influence on their husbands’ buying decisions. One shudders to think that such attitudes are still not entirely eradicated, just much more cleverly veiled. Lady Cecil Scott Montagu is credited with organizing the Ladies Automobile Club of Great Britain and Ireland in 1903 (both entries regrettably absent from the index!). Against formidable odds it grew from 17 to 400 members in only six years and had an incalculable effect on furthering the cause by providing technical help, a hotel booking service, reliability trials, and driving lessons. Its origins are obscure but thought to be a reaction to the RAC’s refusal to admit women. Imagine the dinner-table discussions in the Montagu household!

Each of the six chapters is structured the same: a statement of the thesis, an exposition of the relevant evidence, a conclusion, and chapter notes. Those notes and the extensive bibliography that covers manuscript sources, books, and yet-unpublished theses could send the curious reader on a multi-year quest to dig further into the subject. An important and engaging book in Manchester University’s Studies in Popular Culture series! O’Connell has since moved on to become Research Officer in the Business History Unit at the London School of Economics.