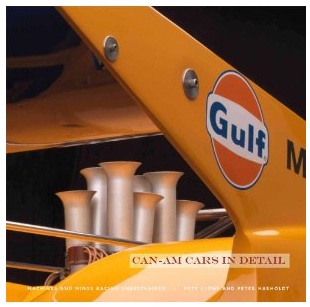 If you know your cars and you saw the cover photo without any text, you’d know right away you’re looking at a Can-Am car. Ain’t nothin’ like it. The subtitle says it all: Unrestrained. Unrestricted. Formula Libre. Anything goes. The Canadian-American Challenge Cup, an SCCA/CASC sports car racing series from 1966–1974, didn’t even last nine seasons and only 71 races but witnessed never before or since seen technological flights of fancy.

“If you love racing cars, and believe the best of them should make you step back in fear, Can-Ams are your kind of car.”

This book portrays the history of 22 of the surviving Unlimited sports (meaning two seats and wheels enclosed by bodywork) racers of the era from then to now. Who better to write such a book than a man who covered them back in the day as a journalist, which he says “spoiled him forever.”

Lyons has repaid the favor with two important books on the subject but this new one is the most emotive, thanks in no small measure to collaborator Harholdt’s sumptuous photography. The way the photos are composed, the angles, close-ups, light and shadow clearly demonstrate the photographer’s intellectual understanding of the essence of the cars. Incredible as it sounds, Lyons and Harholdt, who is a professional museum photographer—and, yes, an SCCA and IMSA driver and car enthusiast—met only once at the beginning and at the end of the book project and otherwise worked independently while communicating frequently. Though done by two separate people in two separate places, text and photos are in such harmony that they bring about a symbiotic result in which the sum is, indeed, greater than the parts. This is clearly not just “another book” for Lyons whose approach to the cars is perfectly summed up in the last words of the Introduction: “Please honor them.”

If you’re new to Can-Am racing this book is not the first place to look for an overall even if abbreviated history. Much fact is of course dispensed in the descriptions of the individual cars but it is expressly not the goal of the book to be an organized history lesson. Also, there are obviously other notable cars than the ones selected here, but in the authors’ and publisher’s estimation these 22 are a representative sample of the historically important, innovative, technically significant, and heroic. And, yet another possible point of contention for those who simply must find a hair in the ointment, some of the cars here are replicas. Gasp. (Nonsense. Racecars are consumables to begin with. Just because one died in the line of duty doesn’t mean it doesn’t deserve to rise from the ashes.)

The cars are presented in the order in which they first ran. This already gives the reader some sense of whatever little linearity there is in terms of technical development. Each treatment is 10–12 pages long, with 5–7 photos, and begins with a color spread followed by a full-page detail shot. McLarens feature prominently, befitting their status as the dominant maker in the series. Lyons describes salient features of each car, the people behind and in it, driving characteristics, and specific technical accomplishments. It is easier to write a book that explains indiscriminately everything under the sun than one that pares the matter down to its essentials. Lyons, having full grasp of the subject, knows how to make the story lean but still connected. 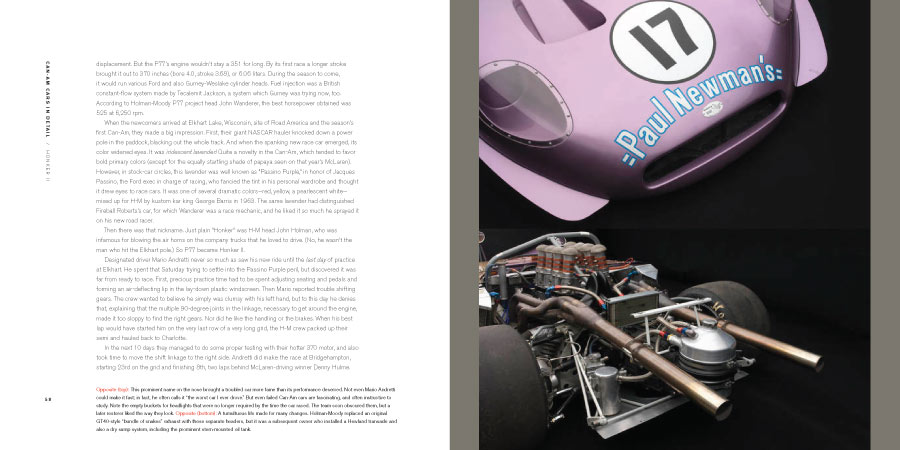 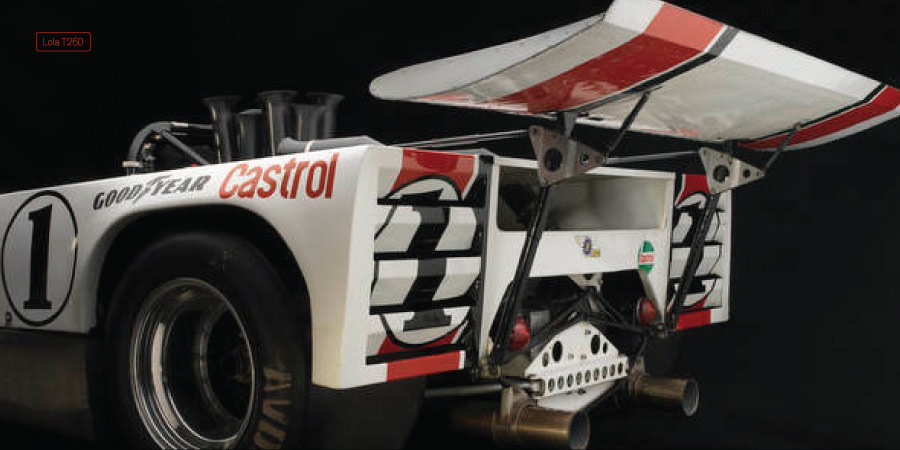 Even the pages with full-bleed photos which you cannot avoid touching when turning pages are admirably fingerprint-resistant. Difficult to describe, the photos have a certain “cast” to them that lends itself well to racecar photography (wouldn’t work so well with, say, flowers), the word “grittiness” comes to mind as long as it is understood not to imply dull- or muddiness. There is also a certain plasticity, dimensionality to the photos which is only enhanced by the large 11 x 11” page size. (Speaking of grit brings to mind polish. Users of the Griot company’s car care products will see their consumer dollars at work in the form of company founder Richard Griot’s 1967 McLaren M6A. He may put goofy people in his catalog—towering pink beehive on fake mother-in-law—but he sure knows a serious car.)

No matter how competent the text and how engaging the photos, all could be left lifeless by unintelligent book design. Once more Tom Morgan of Blue Design is doing his profession proud. Across the board, publisher David Bull’s books are synonymous with top-of-the-line bookmaking and it seems superfluous to keep praising it time after time. On the other hand, it should (a) never be taken for granted and (b) there may actually be readers who have not yet experienced all that a well-made book can be. You don’t know what you’re missing! And you will never again look kindly upon another publisher’s shoddy $100 book after fondling these gems!

As others before it, this book too is available in a Publisher’s Edition of 250 numbered copies (ISBN-13: 978-1-935007-11-1, $395). It is 36 pages longer and features another 10 cars. It is autographed by five Can-Am constructors (Tyler Alexander, McLaren; Eric Broadley, Lola; Dan Gurney, AAR; Jim Hall, Chaparral; Don Nichols, Shadow) and five drivers (Chris Amon, Mario Andretti, 1972 champion George Follmer, 1974 champion Jackie Oliver, 1966 champion John Surtees). And if that isn’t special enough, there’s a limited run of 40 leather-bound Premium Editions that come in an aluminum box inspired by the construction of a Lola monocoque. Contact the publisher for price and availability.

BRM: A Mechanic’s Tale »
« The Corvette in the Barn: More Great Stories of Automotive Archaeology