Ships and Shipbuilders: Pioneers of Design and Construction 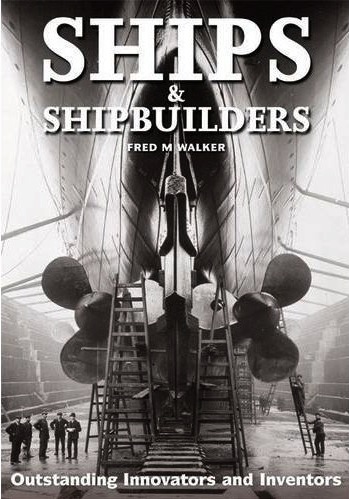 To the uninitiated, “Rina” may sound like the name of the girl next door but RINA, or rather the RINA, is really the venerable Royal Institution of Naval Architects which celebrated its 150th anniversary in 2010, which occasioned this book.

From Archimedes of Syracuse to V I Yourkevitch, 136 pioneers from many branches of naval architecture and related fields are portrayed here in short profiles. As RINA Chief Executive Trevor Blakeley notes in his Foreword, ships are “the largest and most complex moveable structures ever built by mankind.”

This, then, means that shipbuilding is largely a team effort but even so, certain individuals have attained particular distinction and are here recognized. Beginning with “the enabling work of mathematicians and philosophers” the book showcases architects, builders, engineers, and scientists alongside businesspeople and a number of other professions (including spies!) that pertain to the development of safe ships—from sail to steam to nuclear—and their use.

Walker is acutely aware of the arbitrariness that is necessary to cull the large field of deserving souls from several centuries to these 136 but his methodology of wanting to have most shipbuilding countries represented and to treat all professions, eras, or locations in a balanced manner is perfectly plausible. As well, it gives the reader who has only a casual acquaintance with the subject a very large frame of reference. Likewise, organizing the bios chronologically rather than alphabetically makes it easy to follow the development of the field concurrently in different parts of the world. This arrangement lends itself well to reading the book cover to cover rather than just looking up individual names. Obviously, within the main entries reference is made to all sorts of other people (who are also included in the Index); crossreferences to other main entries are conveniently in bold. Each entry lists select sources.

The book is divided into five principal periods, each introduced by several pages of overview of historical and technical issues and a table of key dates/events. None of the people covered here are still alive, the last one having died in 1998. A good number of these portraits have previously been published in the RINA newsletter over several years.

Walker spent his entire professional life with ships, moving up from an apprenticeship in shipbuilding to Shipyard Manager of Hall Russell before being appointed Naval Architect at the National Maritime Museum. It is important to appreciate, especially given this wide-ranging background, that Walker is not merely regurgitating basic biographical tidbits but offers a reasoned appraisal, at times re-appraisal that goes beyond established wisdom, of the individuals.

While the Foreword makes reference to women in the plural there’s really only one included here (Isabella Elder, b. 1828), and even that only by virtue of her taking over her husband’s shipyard upon his premature death.

Photographically, it’s slim pickings but then that’s not the purpose of this book: a few dozen headshots, a few boats, the occasional tool or component, and a few drawings.

Appended is a Further Reading list; this, too, is in chronological (1768–2007) rather than alphabetical order. Consisting of two parts, each on one page, it is short enough to scan for particular authors/titles you may already know about. The Index was obviously compiled by someone who has a grasp of the subject inasmuch as it doesn’t list everything under the sun but pares it down to essentials.

Whether they ended reaping untold riches or in debtor’s prison, all these people had significant ideas and the will to go to bat for them. The scope of the entries and the lively writing should make the book attractive to even those readers who do not, yet, have maritime leanings—anyone with an interest in human endeavor will find much to occupy the mind here.

Road Racing: Drivers of the 60’s and 70’s »
« David Molyneux: The Racer’s Edge, Memories of an Isle of Man TT Legend