At the Greatest Speed: Gordon Bennett, the Father of International Motor Racing 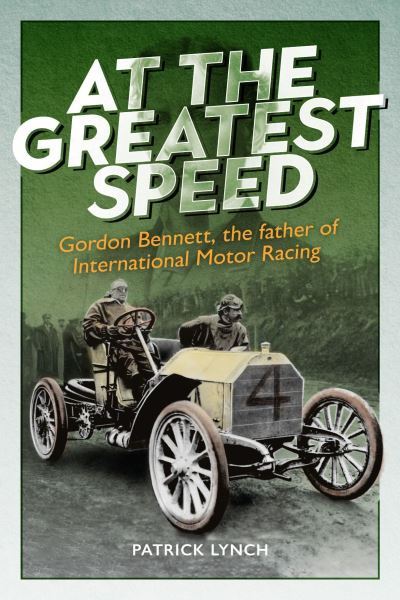 “Private tutors may have taught their charge three languages, but they noticeably failed to teach him that he was not the centre of the universe. Segregated by wealth, the headstrong boy failed to experience the rough and tumble of a school playground—that egalitarian site where so many other youngsters are brought into line. However, thanks to some of the household servants, he had learned how to use his fists from an early age, and by puberty had been introduced to sex and alcohol.”

No matter the era that’s a pile of play money for a young man. That he was heir to the largest newspaper in the US and then the world was surely both blessing and burden. He was described as “dynamic, daring, drunk and disorderly” but this book is not a morality play but an interrogation of how those attributes all come into play in compelling a spoiled American playboy into action.

There already exist a number of biographies of James Gordon Bennett Jr. (b. 1841) but author Patrick Lynch says he is specifically interested in how Bennett’s compulsion to win, no matter the effort or cost or even chicanery, is an aspect of showing up his peers who think him an uncouth loudmouth.

No one with an interest in early motoring could possibly be unaware of The Gordon Bennett Cup Races of 1903–05 but Bennett also organized both the first polo match and tennis match in the United States, personally won the first trans-oceanic yacht race, sponsored expeditions to find David Livingstone and the North Pole, championed balloon and airplane racing, and sponsored soccer tournaments. As a competitive event only the balloon race (Coupe Aéronautique Gordon Bennett) still exists, and therein lies another aspect that attracts Lynch’s interest: Bennett “hated professionalism in sport and always championed the keen and daring amateur.” Which, to return to the book’s core subject, is why Bennett lost interest in motor racing after only a few years, when manufacturers took an ever growing role in motorsports, which in turn prompted the French to fill the void left by the cessation of the Bennett Cup Races with a new type of racing, Grands Prix, first run in 1906. And that, as tortured a thought as it is, is why JGB Jr. is so often referred to as “the father of Formula One.”

As both an Irishman and a motoring enthusiast from an early age it is not surprising that Lynch (b. 1957) should have developed an interest in an event that put the Emerald Isle in the history books as the place the first time an international motor race was held in Great Britain and also the first on public roads that were closed off and prepared specifically for the race, the latter prompted by a race in France (Paris–Madrid) only two months before that had been halted because of the many accidents. What is surprising is that Lynch says he does most of his writing aboard ship—his day job at the time—because that would mean limited access to research materials other than the notes he brings along or Internet sources [1]. Many of the latter are, in fact, enumerated in the Bibliography, accompanied—quite unusual—by the dates he accessed them, the thinking presumably being that the Almighty Interweb is never static. Lynch also visited a good number of libraries in person and was able to draw on research (for an unpublished work?) left behind by a family friend. Photos, being printed on different paper stock, are bundled into two separate sections. While they are numbered they are not called out in the text nor does the List of Illustrations refer to book pages; not a user-friendly choice.

This book has all the markings of solid organization: a properly good Index, a well thought out Table of Contents, a list of illustrations, and several maps and tables. At no point is there any reason for the reader to question if the author has a plan—but you will have to hold firm to that thought because it does take Lynch a few rounds to circle to the early motor racing story the book title promises. Early on Lynch allows that he actually has a companion volume in the works in which to further develop those themes (i.e. JGB’s personality) that here are only skimmed as chronological stepping stones. (It will also reveal an “important secret” relating to his family tree.)

An obit for Bennett couldn’t have said it better:

“A novelist could not invent such a figure.”

Anyone today, provided you have a car 30 years or older, can partake in a Gordon Bennett Classic Car Run very much near/on the old Irish roads and at minimal cost (€75, plus meals and hotels).

At the Greatest Speed: Gordon Bennett, the Father of International Motor Racing

Bravo, Stanley! »
« Morgans for a Lifetime: In Prose and Poetry