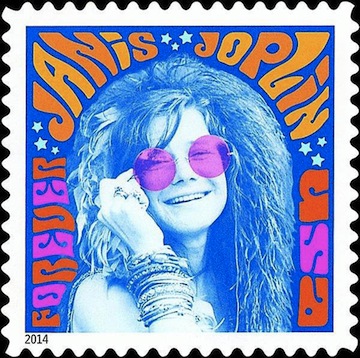 Like the bittersweet life of Janis Joplin, this will be brief. Not so much a review, but an appreciation. Designed by Antonio Alcalá, the Janis Joplin pane mimics a 7 x 7″ 45 RPM record picture sleeve, and does so with casual elegance.

On the obverse, Alcalá captures deftly the hippie-psychedelic-San Francisco era, and appreciating the wealth of available images, the large portrait of Joplin is well chosen. Joplin is happy, relishing the music that she loves. Behind the singer, the background text employs the style of the Fillmore West posters. 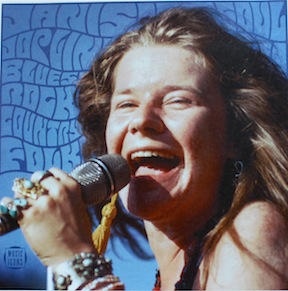 The originators of this approach to lettering, Stanley Mouse being among the best of them, had turned the concept of poster art on its head. Usually poster fonts are designed for immediacy, quickly and boldly stating the message. In the spirit of the times, the Fillmore poster artists, rather than creating readily digestible information, had contorted and shaped the message into flowing, flowering patterns. This forced the viewer to slow down, providing a sly and joyful puzzle—especially, perhaps, for those in an altered state of consciousness. Here it works well, although it must be assumed that today’s postal customers are sober and restrained. 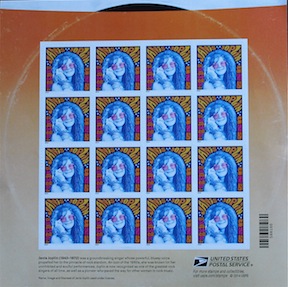 The postage stamps themselves are found on the reverse, along with the barcode, official logos and a quick biography of Joplin. And it is here that Alcalá’s imagination verily soars: the record sleeve is not a mint, brand new and glossy copy, but one that has been affectionately used over decades. Through the years of handling and storage, the vinyl disk—the top of which can be seen—has worn away the finish of the sleeve, creating discernable ring wear. Small tears and other wear patterns have surfaced and the background color has faded. It is this manufactured aging of the sleeve that has taken what could have been a rather trite tribute to both Janis Joplin and the age of 45 RPMs to a clever and tasteful exemplar of commercial art. We at Speedreaders applaud the effort. 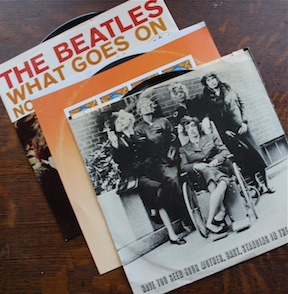 Note: Janis Joplin is the fifth of the Music Icons series after Lydia Mendoza, Johnny Cash, Ray Charles and Jimi Hendrix—honoring, according to the USPS, “beloved musicians whose blend of sound and way of life broke boundaries.”