The Last Atlantic Liners: Getting There is Half the Fun 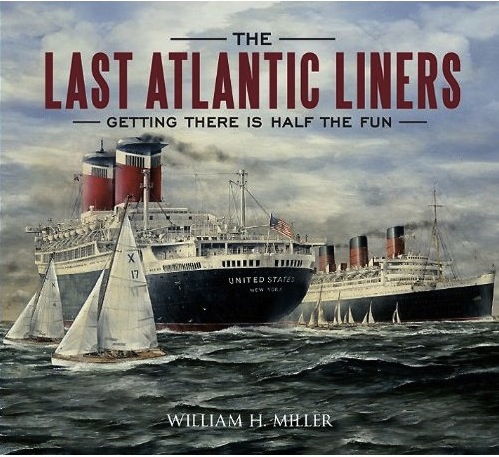 Unless you live under a rock you can’t have failed to notice that transatlantic ocean liners have been in the news lately. No coincidence—it’s the 100th anniversary year of the launching and five days later the sinking of RMS Titanic, the world’s most luxurious boat and thought to be unsinkable.

“Getting There is Half the Fun” says the subtitle and that’s of course what travelers sign up for but sailing the high seas is always fraught with risk. The steamship era saw a disproportionate number of disaster and the Titanic is by no means the only, and certainly not the first White Star flagship, to have suffered an accident (Tayleur – 1854, Royal Standard – 1964, Atlantic – 1873, Republic – 1909 to name only a few).

Bill “Mr. Ocean Liner” Miller, a former public school teacher, has over 70 books and 1000 articles about ocean liners and cruise ships to his name, and has made over 300 voyages on anything from cargo boat to ultra-luxury floating palace. He regularly gives lectures about and aboard such vessels, and, among other distinctions, was named Outstanding American Maritime Scholar (1994) and in 2004 received the United States Maritime Preservation Award and the Ocean Liner Council’s Silver Riband Award. To say he “knows a thing or two” is like mistaking the tip of the iceberg for the whole thing.

Such a long list of plaudits raises expectations—that are, in this book, not met. The only sort of reader to whom it can be recommended is someone who has never given liners another thought and who just wants a basic scratch-the-surface quick look at the photographic record. Think of this book as an annotated photo album. A less charitable description would be a photo album that fell to the floor and all the photos that fell out were randomly stuck back in! The book has absolutely no discernible organization. Photos, often undated, randomly skip forwards and backwards among decades; there is no thematic arc (which at least makes the lack of a Table of Contents a non-issue); and Miller at no point puts forth what he intends to accomplish with this book or in what way it enriches the literature or advances the body of knowledge.

While there is an Introduction, by Miller, it is more about him than the topic. It sets no scene, creates no context, and only talks about the 2004 Queen Mary 2. Similarly, the Foreword by ocean liner memorabilia dealer/collector Richard Faber is more about his and his family’s voyages than anything truly insightful about the last of the liners of the golden age. It is probably only coincidence that Faber, comparing American to Italian liners, touches upon something the book cover happens to show: in what close proximity passenger ships—usually of the same line—passed each other on the open sea (although the presence of sailboats on the cover must mean this scene is rather closer to shore).

Speaking of the cover: the two ships shown, (l–r) the United States and the Queen Mary, don’t at all represent the end of the era (early 1970s) this book seeks to describe as both were decommissioned before then. This is one of several paintings by Robert Lloyd that are used in the book and he may not have had one that showed what would have been a more apropos encounter, for instance the France and the Rafaello passing each other which definitely would have had to show them close to shore since their routes weren’t near each other on the open sea.

The only other text in the book are the photo captions, which are quite extensive even if not at all suitable to telling any sort of cohesive story. On the one hand there’s micro detail such as the name of Grace Kelly’s “black, wiry-haired” poodle, on the other hand the captions merely gloss over the aforementioned Rafaello and it sister ships being among the most advanced of their time or their utterly distinctive and highly stylized, futuristic Art Deco interiors.

There is no Index but there is a Bibliography—in which six of the only twelve titles listed are Miller’s.

Very much a mixed bag, even considering the low price.

The Last Atlantic Liners: Getting There is Half the Fun

Illustrated Dictionary of Automobile Body Styles »
« The American Highway: The History and Culture of Roads in the United States