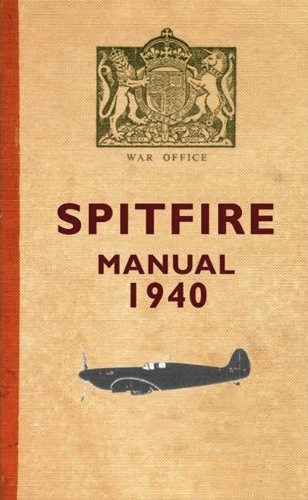 The quote below is from the “Forget-Me-Nots for Fighters” reproduced here, one of the many instructional booklets and manuals for pilots of the famous Supermarine Spitfire of which this entire book consists. The following is therefore not so much a “review” of the contents but a description of the book, the topic, and the author/editor.

The book, replete with a period-correct faux linen cover (soon to be dog-eared, for that authentic time-worn look), contains facsimiles of eight original Air Ministry-issue materials. Each of these is introduced with remarks by the editor explaining their purpose, use, design etc.

“DON’T ‘beat up’ the aerodrome on your return, however pleased you are with yourself. It is bad manners, and some of those aerodrome defence chaps might take it the wrong way.”

The first and longest item, Pilot’s Notes (for IIA and IIB Spits with Merlin XII engines), covers the actual operation of the aircraft. This is followed by a Pilot’s Flying Log (Form 414) belonging to none other than the RAF’s top-scoring fighter pilot in World War Two, then Wing Commander and later Air Vice-Marshal Johnnie Johnson. Several of the Pilot’s Personal Combat Reports (Form F) are also his. Next is shown one Aircraft Movement Card (Form 78) whose purpose was to log the whereabouts and physical status of the plane. Following the already mentioned “Forget-Me-Nots” are General Notes on Air Gunnery and Air Fighting, the cartoon- and diagram-laden treatise Bag the Hun! (just what you think it is: air to air combat), and an aircraft spotting guide.

Born in 1961, Sarkar was 8 years old when he saw his first Spit. Inspired by that, the Battle of Britain movie, and first and foremost a neighbor, he made understanding the war a lasting theme in his life, pursuing it to the extent that other professional obligations allowed it. Over time he has become a veritable fixture in the Spitfire world. Since the 1970s he has interviewed more Battle of Britain pilots than any other historian and published over twenty books on this and related subjects. In 1986 he co-founded the Malvern Spitfire Team, and from 1992–2002 owned Ramrod Publications which published many of his and other books. No wonder then that he was made an MBE (2003) for services to aviation history and elected to a Fellowship of the Royal Historical Society (2006).

Before going into the next paragraph it might be useful to point out that Sarkar is not only an expert aviation historian but also a retired police detective and thus used to sleuthing. (The late Dr. Gordon Mitchell, son of Spitfire designer Reginald Joseph Mitchell, used to call Sarkar an “aviation detective”.)

The year this book is published, 2010, is the 70th anniversary of the Battle of Britain. In the 30-page Introduction Sarkar recaps key aspects of it and the planning and execution of the air war in general as they relate to the Sptifire topic. A good deal of the narrative is in the form of excerpts from interviews with flight personnel. A recurring theme is the Hurricane vs. Spitfire debate. It was long held that the Hurricane, which was introduced earlier and in larger numbers, “won” the Battle of Britain by inflicting greater damage on the enemy than all other defenses combined. Sarkar and others have argued against this, basing their arguments on analyses of damage assessments, casualty records, and pilot reports. This remains a controversial issue but Sarkar is so confident in the validity of his argument that he goes so far as to call the Hurricane “markedly inferior to the Spitfire” and that, based on objective parameters, the BoB could have been won by Spitfires, but not by Hurricanes, alone. Another position he takes is contrarian no longer but presently still the exception rather than the rule: a positive assessment of Air Chief Marshal Hugh Dowding.

Sarkar is used to sticking to his guns. It was his research (1995) that revealed that Wing Commander Douglas Bader (d. 1982) was shot down by friendly fire from another Spitfire. Out of courtesy to the other pilot, who was still alive at the time, Sarkar didn’t make this story public until he published Spitfire! Courage and Sacrifice in 2006 (Victory Books, also founded by him. ISBN-13: 978-0955043161).

Sarkar is currently pursuing a PhD at the University of Birmingham’s new Centre for Air Power Studies. He now writes exclusively for the publisher of this book, Amberley, and is already commissioned to do several more. They will surely advance the body of knowledge further still.