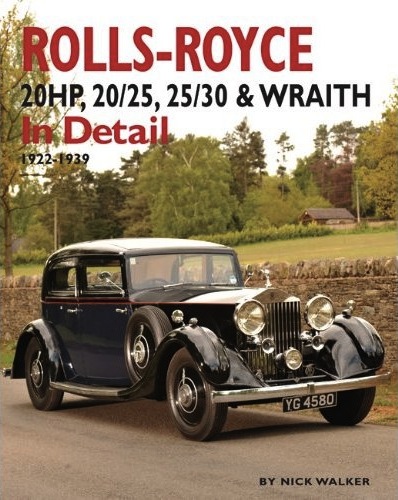 All of the models in this new addition to this publisher’s “In Detail” series were market successes for Rolls-Royce in the years between World Wars One and Two. Launched in 1922, they at first added to the 40/50 hp (a/k/a Silver Ghost) range they followed, and then gradually outstripped it in sales. Over 10,000 were made and they enjoy a high survival rate, today being just as popular—especially in Britain and Europe—because their slightly smaller size and better fuel economy make them feasible cars to use even under modern conditions. Walker’s book captures every aspect of these models, puts them into context, and gives prospective owners a greater feel for which one would suit them best.

The book starts with a lengthy preamble on the early years of the Rolls-Royce company, followed by a useful explanation of the conditions after 1918 that prompted the need for the small horsepower idea. It didn’t stay “small” horsepower for long and gradually the later cars became more powerful to suit the longer chassis and bulkier coachwork that customers demanded. The bulk of this part of the book will be of most use to readers new to the company’s history.

New to the record are excerpts from and references to reports on the teething problems of early cars written by Percy Northey, a key member of the Rolls-Royce London sales office. These reports were discovered in the Hunt House archives of the Rolls-Royce Club in England. Walker is well placed to tell this side of the story because of his expertise in coachwork history, as evidenced in his book A–Z [of] British Coachbuilders, others on the coachwork on Vintage and Derby Bentley as well as Alvises (all but the first in this same “In Detail” series). It is this understanding of other marques and the coachbuilding craft in general that enables him to make insightful comparisons with competitors to these models and explain why Rolls-Royce outsold most of them.
The technical development of the cars is well told, but better still is Walker’s handling of the coachwork story, enhanced with a splendid selection of period and recent photographs. There are several technical drawings of chassis and engine components. Each model’s specs are enumerated in their respective chapters. Always a special treat, a few of the period photos—mostly from Rolls-Royce or coachbuilders’ files— are new to the record, as are the 100-odd contemporary color photos by Simon Clay of nine particularly interesting cars.

The book ends with impressions of the cars on the road, first as seen by contemporary writers and then today. The chapter “On the road then” in particular is most amusing as the author captures the social nuances of the times. Appended are a table of Road Test Data with references to the period car magazines that first published them and a Chassis Timeline Chart that tells which chassis codes belong with which series and model years. The index is basic and serviceable. The book is not without a few minor errors of identification and missed opportunities (an errata sheet for reprint corrections has been submitted to the author) but they don’t detract from a most enjoyable survey of these wonderful cars.

Copyright 2009, Sabu Advani (speedreaders.info), rewritten and adapted from a review written by Tom Clarke for the January/February 2010 issue of The Flying Lady, the periodical of the Rolls-Royce Owners’ Club (RROC/USA).
(Reviewer Clarke, a recognized Rolls-Royce scholar, has himself authored several books and countless articles along with providing help and guidance on other book projects.)