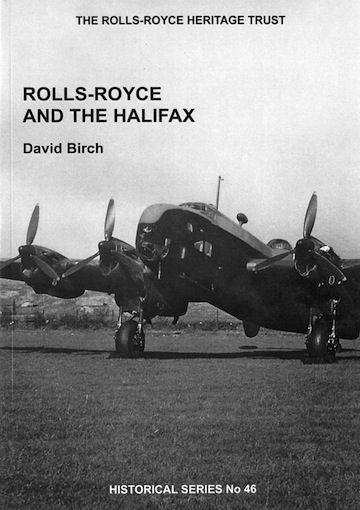 At long last here’s another book in the Rolls-Royce Heritage Trust’s Technical Series, now numbering 46 volumes. Slim as they are, every one of them significantly advances industrial and engineering history—and at a pittance of a price!

While, naturally, rather specialized, this book is built around a key issue that should resonate with anyone who has even peripheral awareness of one of the most storied Rolls-Royce products, the Merlin aero engine. The engine in and of itself is rightly legendary as are, usually, the aircraft it is bolted to. In regards to bombers such as the Halifax you’d have to look no further than its famous contemporary, the Avro Lancaster.

But in the case of the Halifax heavy bomber this proved an unhappy marriage and the book makes clear something that laypeople really don’t usually appreciate: that it is the combination of airframe and powerplant that together make a successful aircraft. If these are made by different vendors, it is crucial that they work hand in hand.

Despite Rolls-Royce’s solid reputation as an engine maker, the company that designed and built the first Halifaxes (Handley Page), would not relinquish design responsibility for the powerplant, giving this aircraft such a dismal start in life that Air Chief Marshal Arthur Harris, head of Bomber Command, was withering in his criticism.

By examining this angle, the book makes an interesting case study for anyone concerned with, for lack of a better word, industrial relations because Handley Page’s attitude towards cooperation was quite unlike that of, for instance, Armstrong Siddeley and Vickers-Armstrong whose more symbiotic relationship with their engine maker (R-R) had resulted in more competent aircraft right from the start. It would take the Halifax several dismal years, from its launch in 1939 to about 1943, to overcome these self-inflicted problems and even those improvements were only a step on the way to the ultimate outcome, switching powerplants (to Bristol Hercules). Over 6000 aircraft would be built, by a number of makers, until production ended in 1945. (Take a virtual tour of a survivor at the Yorkshire Air Museum.) They were last operated by the Pakistan Air Force until 1961.

Just to be clear, this book is not an overall history of the Halifax (about which there is no shortage of general-interest literature). There is no surviving documentation of the two firms’ dealings with each other during the design of the Halifax until after the first flight in 1939. Birch, who has written a number of important aero books, reproduces lots of correspondence between Rolls-Royce’s Ernest Hives and his liaison, Bill Lappin, and others. Some of this has not seen the light of day in a long, long time and also many of the illustrations have not been published before.

Aero folk will recognize that this is very much an underreported story and applaud that this little book connects some important dots.