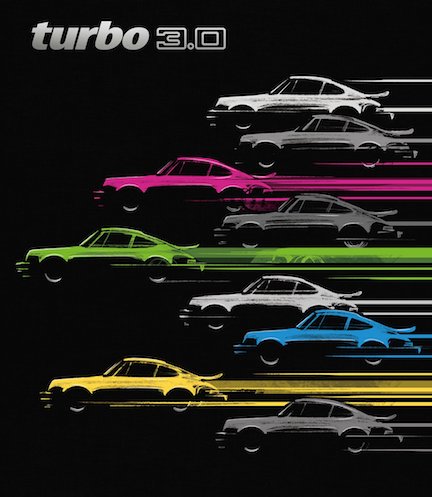 “Without the 3.0-liter Turbo, Porsche’s turbocharged racing story would be a shadow of what it is today and, perhaps, Porsche would never have achieved the reputation of being the groundbreaking, technology-driven manufacturer that it still trades on today.” 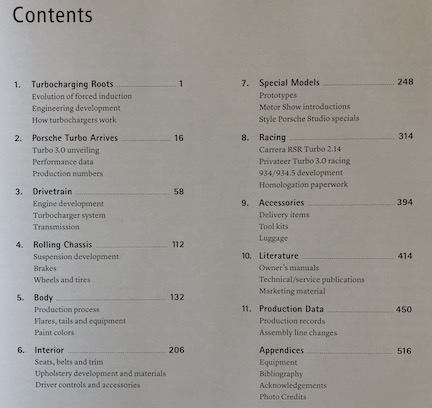 Enough with the preliminaries. Yes, this book is an “event” unto itself—not least considering its arduous and oft-delayed production path—and while the turmoil probably put a few nails into its perfectionist author-publisher’s coffin, it’ll give you the entirely uncommon thought that there is, still, intelligent life out there. If you are a 911 fan, especially a Turbo fan, none of this will matter because you already know that, based on the strength of the author’s previous work, this is not a book you can afford to be on the fence about. Only 2500 copies (plus 300 in the $595 Publisher’s Edition that was used for this review) exist anyway, so, spool up that turbo and get your order in. 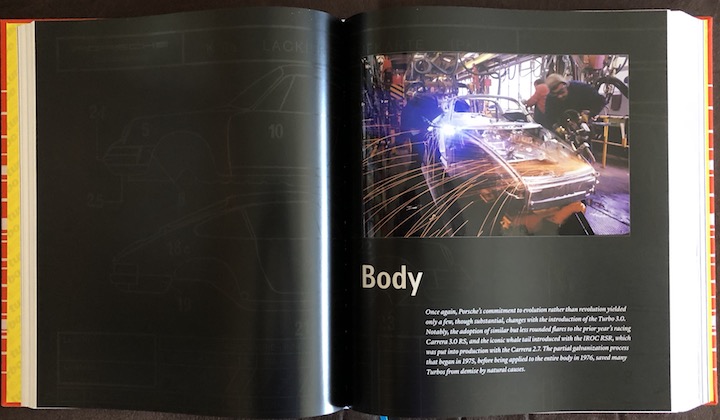 If you have the patience, start your exploration of the book with the 20-page “Behind the Scenes” Supplement. It’ll give you a mighty appreciation for the fantastic amount of thought and work that goes into producing a book of this caliber. And that’s if everything goes well . . . Murphy’s Law could have been invented for the publishing world. . . . People who’ve been aware of this book project for the last few years and had to readjust their “now I can die happy” clock repeatedly know well enough the litany of production challenges Snodgrass had to overcome in order to adhere to his vision. Now the book is here, at last, and of course it was worth the wait. As did the previous book, the new one raises the bar in regards to “richness” in terms of presentation, selection and organization, and distinguishes itself in regards to the integrity of the data, inferences drawn, new micro details added to the record. 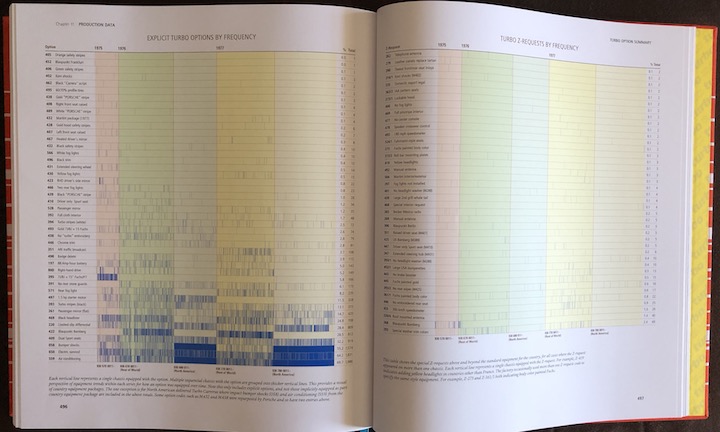 A necessary caveat: the book deals only with the original run of 3L Turbos, the 2874 cars built 1975–77. Even if you are—tsk, tsk!—someone to whom all 911s look alike, a 911 Turbo, or, properly, a Porsche 930, is instantly recognizable. Hint; it’s that tail! Throughout its life it was Porsche’s top-of-the-line model, and as engineer-turned-race driver Jürgen Barth (a Porsche author, too) rightly says in his Foreword, at its launch it was the fastest production car in Germany but still even civilians found it “a really fun car to drive” at the limit—if they had been properly briefed on its use, by the likes of him. 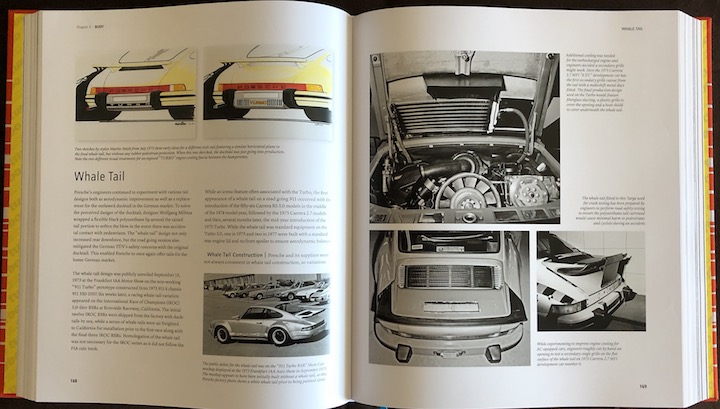 For motorcars that burn gasoline, especially performance cars, turbocharging is nowadays a hot topic and so anyone who looks at the technology angle will benefit from seeing here how the first road car produced in series tackled the problems. 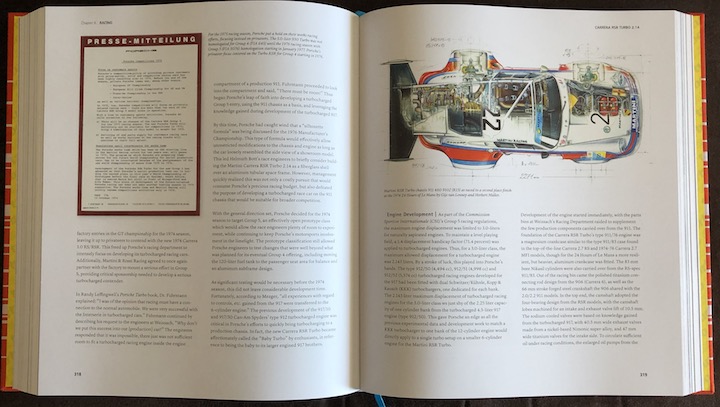 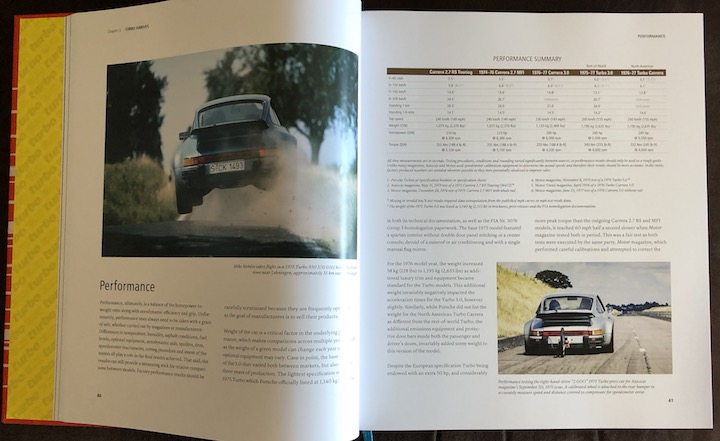 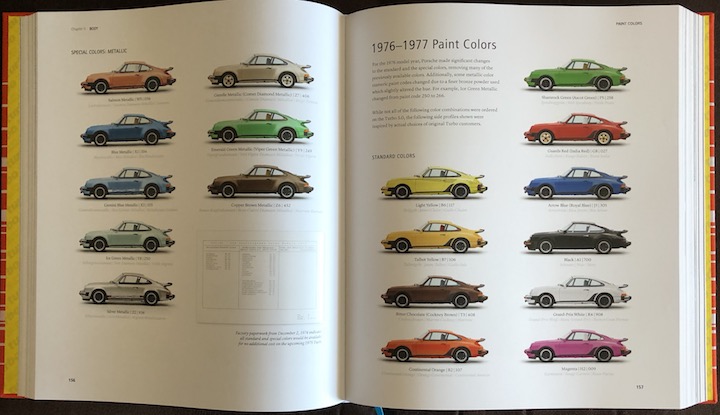 The Turbo book picks up where the author’s previous one on the Carrera 2.7 ends, both in terms of chronology and also technical evolution. The books were conceived as companion volumes and what little overlap there is between the two in regards to especially photos is only for the sake of rounding out certain aspects of the story.

To thread the needle, Snodgrass offers a quick summary of the technical principles behind forced induction and showcases early applications including ships and aircraft. One of the automotive projects actually involved a young Ferdinand Porsche, in the 1920s (working on the Mercedes-Benz SSK), decades before the firm he was yet to found would become a leader in this technology. This section really is only a high-level snapshot and the novice reader will probably not gain a fully rounded understanding of why turbos were so complicated and therefore costly and also failure prone and therefore were considered unfeasible for mass-produced road cars. 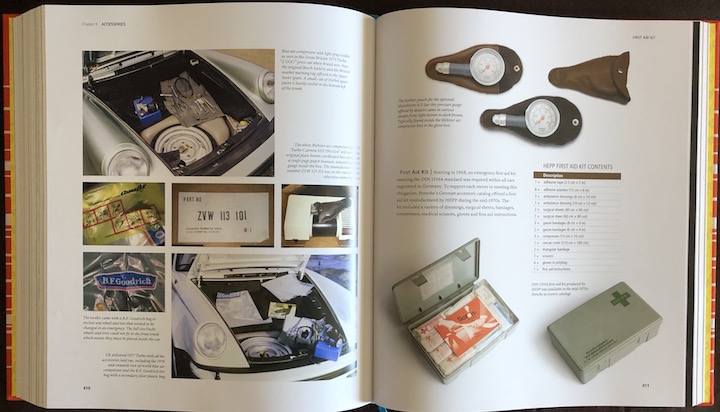 The level of magnification changes drastically once the story turns to Porsche, first the racecars beginning with the all-dominant 917. The existing Porsche literature is immensely deep and it can’t have been easy for Snodgrass to reconcile different accounts, choose which gaps to fill, and clean up the data. From the business case to design parameters to marketing strategies to specs for different world markets, this one authoritative books puts it all your fingertips. 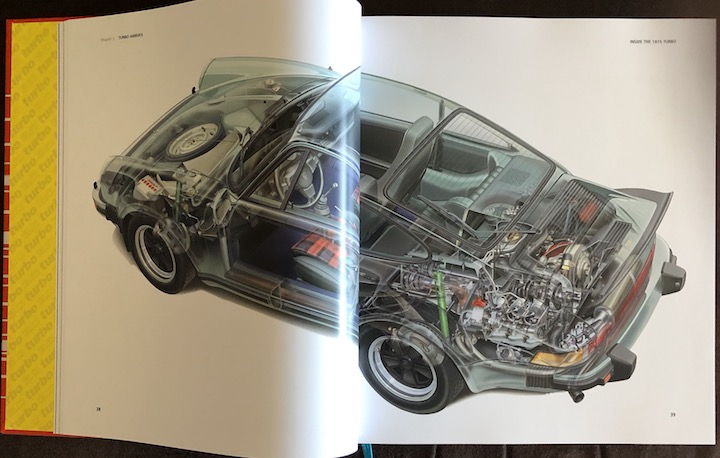 On the illustrative side there are many gems and almost half the images have never before been published. In terms of craft the cutaway [above] by Makotu Ouchi must rank supreme. Moreover, it is the first ever of a Turbo 3.0! The in-period photography of the Porsche factory by Guy Morrison adds singular detail; images of his were already used in the Carrera book as was the contemporary studio work of Michael Furman. The layout is easy on the eyes and the prose, detail laden as it is, a joy to read. 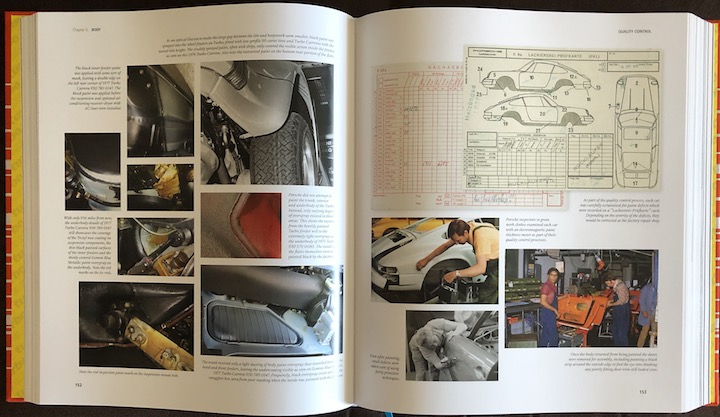 Much more could be said but the case could not be made more persuasive: Whether you are a Turbo owner/aspirant or a bibliophile book geek, on every count, this book is significant.