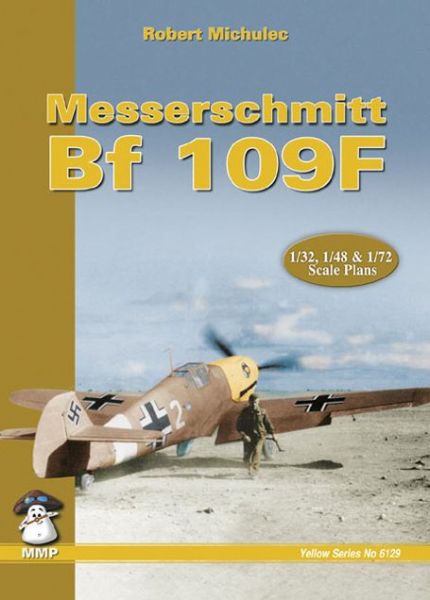 “Due to separate research programmes conducted in parallel by Messerschmitt AG, the entire process of developing the Bf 109F should be seen as being divided into two main projects.”

The 109 model run literally goes from “A” to “Z” (for Zwilling, or twin, for its two fuselages joined by a wing) and within each model has numerous submodels. The “F” experimented with different wing shapes and introduced a long list of aerodynamic improvements, significantly improving range by a third compared to the “E”. After fixing the handling problems common to early Fs it was considered the best-handling in the 109 series.

Unlike the P-38 Lightning book it follows in this publisher’s Yellow Series, the Bf 109 book is in the more common smaller A5 format and a softcover. It too contains a “poster” but in this case it is a foldout sheet of four panels (almost 2 ft long) bound into the book. The only thing that will stop you from wanting to tear it out and pin it to the wall is that the sumptuous hyper-realistic (the emblems have actually “dirt” on them) full-color profile view on the one side has b/w 1/48 top and bottom views and a color cockpit drawing on the back.

The Bf109 is as popular a model kit as it was in real life. Numerous versions in all scales exist, even RC models. They all can be improved with the detail found in this as in all other MMP books which are specifically aimed at the modeler (unlike, say, Osprey books which go quite a bit deeper into historical aspects). This little book dispenses a commendable amount of background and context in regard to the Bf 109 overall and the F model in particular. Technical specs and modifications take precedence over operational commentary. Over 25 pages are devoted to 1/48 scale color drawings (left and/or right side, side top/bottom views) and concentrate on detailed descriptions of markings and paint schemes. About a third of the book consists of a guided tour of the aircraft in the form of tech art and photos, both period factory and in-service shots and modern imagery of museum aircraft. From exploded views of the tail wheel to the inner workings of canopy latches, it’s all here. Until you study books like this you just don’t realize how much kit makers get wrong or how much you yourself are overlooking when you “read” a photo. The photo captions here have such forensic depth that you’ll be forced to spend extra time trying to find the things the captions tell you are there! Example: “The standard oil cooler can be seen to advantage (suggesting the F-4/trop and not the F-4/Z/trop) . . .” Obvious once someone points it out . . . All MMP books are distinguished by such micro detail which makes them—for the people that need it—pretty much essential reading. Besides, they’re cheap enough to just buy and savor on a slow afternoon for no particular reason.

The Knife and Fork Man, The Life and Work of Charles Benjamin Redrup  »
« British Auto Legends, Classics of Style and Design