A Victorian Scientist and Engineer: Fleeming Jenkin and the Birth of Electrical Engineering 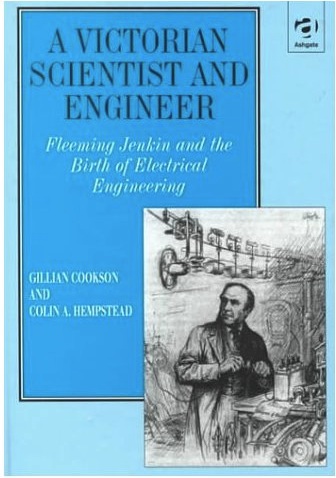 by Gillian Cookson and Colin A. Hempstead

“In talk he was active, combative, pounced upon his interlocutors, and equally enjoyed a victory or defeat.”

Thus wrote Robert Louis Stevenson in 1887 of the subject of this book, his dear friend Fleeming Jenkin whose first, and until now only, biographer he was.

Admittedly, this topic is a bit removed from the field of transportation but electricity is an inseparable aspect of it. Moreover, there are not many books that shed light on the state of engineering or the education and training of engineers in the Victorian Age, thus anyone with an interest in history or biography in general and engineering history in particular will find this book relevant. Many of the early pioneers of the automobile world came from an electrical background, most notably Henry Royce—who studied in the same city in which Jenkin taught and may well have known or known of him—as well as his partner Ernest Claremont who together manufactured electric bell-sets, bulb holders, switches, filaments, fuses, and registering instruments before branching out into dynamos and cranes and then their famous cars.

When Fleeming Jenkin, pioneering Electrical Engineer, died in 1885, he was a scant 52 years old. In this gas-lit time, when there were still very few public supplies of electricity, Jenkin became a moving force in a new and very visible field. A then-cutting edge project of his captured the Victorian popular imagination like few others—intercontinental submarine telegraphy (electric telegraphs, underwater cables). Jenkin was one of the very founders of the new science of electricity, and most electrical discoveries occurred during his lifetime. You know the ohm, you know the ampere and the various other units of measure now in common use around the world. Jenkin’s work for the British Association’s Committee on Electrical Standards played a crucial role in the development and adoption of these absolute measurement standards.

As a scientist Jenkin was a player, equal among equals, a leading light of his age. He advanced his field and received 37 patents between 1869 and 1886; was an innovative and distinguished professor of engineering and first holder (1868) of the Chair of Engineering at the University of Edinburgh; collaborator and business partner of William Thomson (later Lord Kelvin); closely associated with James Clerk Maxwell—yet he remained obscure, in professional terms, in his own time as well as ours. Blame it on his one and only previous biographer, his friend and reluctant former student, Robert Louis Stevenson, the Scottish novelist, poet, essayist, and travel writer. Stevenson loved the man—but not the subject. He barely mentions the major discoveries of the day and failed to do justice to Jenkins’ professional accomplishments.

The present authors observe “It is not unheard of that a person’s fame bears little relationship to the true quality of their achievement and Jenkin deserves to be better known.” Finally, 115 years after Stevenson’s biography, this well presented account at last does justice to Jenkin’s work in his own as well as other fields. It is not explained to what happy alignment of the planets we owe this book. Presumably, a fortuitous convergence of interests among authors, funding, and publisher made this book reality now.

Although scholarly in its approach the book does not burden the reader with technical jargon. Both the specialist and the general reader will find it engagingly written. Its description of the man in his social and intellectual context fills a definite gap in our knowledge of Victorian engineers. In addition, Jenkin’s world was a smaller one than our present one: there were fewer things to know and it was easier to attain competence or even mastery in a variety of acrtivities. Thus Jenkin was not only a luminary in is own field but also a writer on economics and evolution, a linguist, and a lover of drama and literature.

The most excellent Foreword is by Jenkin’s great-grandson Patrick, aka the Right Honourable the Lord Jenkin of Roding. In it he makes the point that a reader would be best served reading this new biography alongside Stevenson’s for the latter’s, despite its flaws, has the advantage of being written by a contemporary and captures a fuller measure of the affection and admiration Jenkin attracted in his day.

Notes, Bibliography, and Index manifest impressively thorough research. A closing chapter comments on the literature in the area of submarine telegraphy.