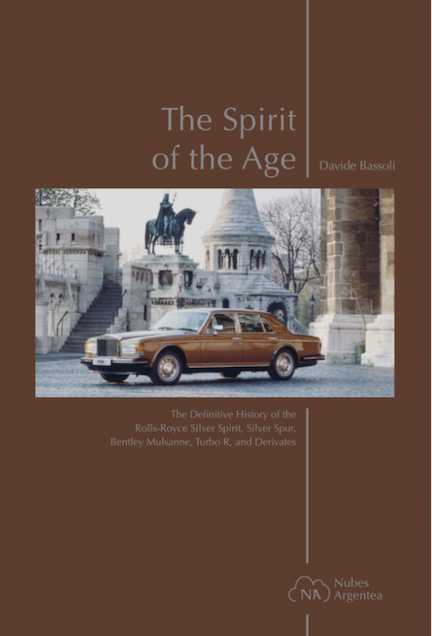 A famous quote associated with this series of long-lived and commercially successful Rolls-Royces and their Bentley stablemates is attributed to Rolls-Royce Chief Stylist Fritz Feller who mused at the launch in 1980: “We will have succeeded in our task of maintaining the Rolls-Royce tradition if, late on a winter’s evening, in a dimly lit street, someone looks out of a window and catches a glimpse of a dark and travel-stained Silver Spirit and says, ‘A Rolls-Royce has just gone by.’”

He must have gotten it right because even today, some 20 years after production ended, you’ll recognize it for what it is.

Likewise, if you’ve seen books by this Italian publisher specializing in Rolls-Royce books, you recognize them for what they are. Named Nubes Argentea after that ultra-iconic Rolls-Royce, the Silver Cloud, its proprietor and chief author—and longtime Rolls-Royce enthusiast—produces distinctly styled and meticulously researched books. Readers have come to expect from Davide Bassoli nothing less than the very highest standards of the bookmaker’s art and once again, they will not be disappointed. The new book is every bit a worthy companion in all respects to its predecessors in this series.

Bassoli has standardized the books of his Great Models series on an unusual format (especially for automotive books) of a tall, rather narrow portrait layout of 12 3/4″ (33 cm) by 9″ (22.8 cm).   He decided on this format upon consultation with the printer as it was the largest that could be accommodated by offset printing on 100 x 70 cm paper. Though a great many automotive titles utilize the horizontal, or landscape, format as it readily lends itself to full-page automobile portraits, this non-standard format has its advantages. For one, there really isn’t much need for full-car profile portraits to be any larger than pages of this width allow, and detail photos of that size are more than adequately generous in size to clearly show details. Also, the tall vertical dimension allows the stacking of three adequately sized photos per page. Finding space that tall in your bookcase may be a bit of a challenge, though.

The main text with its twelve (unnumbered) chapters covers the first 176 pages, with the remaining pages occupied by twelve(!) appendices. The design, prototype, and production preparation stories are covered chronologically and in detail. In the nearly nineteen production years of the SZ series, though the outward appearance changed only in details, many of which require the knowledge of an expert to spot, the not so obvious or even invisible changes made to the interior and “under the hood” led to an almost bewildering assortment of model names, some of which exclusive to only certain markets, and some that were used more than once, leading to considerable confusion, even amongst aficionados of the marques. This volume, covering as it does the entire production run, clearly explains and illustrates them all. I know of no other titles that do so nearly as well.

The production process is thoroughly described and illustrated in a 24-page chapter devoted exclusively to it. All facets of the manufacturing process are covered, from engine assembly to interior leather and woodwork fabrication, and of course, R-R radiator shell assembly and the ancient and skilled labor-intensive lost wax process by which the Spirit of Ecstasy mascot is produced. The photos here alone are worth the price of admission. Well, maybe that’s a bit of a stretch, but they do demonstrably lend credence to the adage that a picture is worth a thousand words.

We learn many of the details of the severe financial crisis the company faced during the world-wide economic downturn of the early 1990s and how the free-spending habits of the Sultan of Brunei and his brother not only quite literally kept the company afloat but likely prevented its failure and ultimate demise.  In just three years, sales of the SZ range, which had been on an uninterrupted upward trend throughout the Eighties plummeted from their all-time high of 3,151 in 1989 to only 586 in 1992, a drop of over 80%. Had it not been for the Brunei royal family’s seemingly insatiable automotive appetite (and their ability to pay for it) as well as their habit of not only ordering extraordinarily expensive bespoke cars but multiples of them, the story might will have turned out tragically. One of the appendices is devoted to some of their cars and what is known of them. 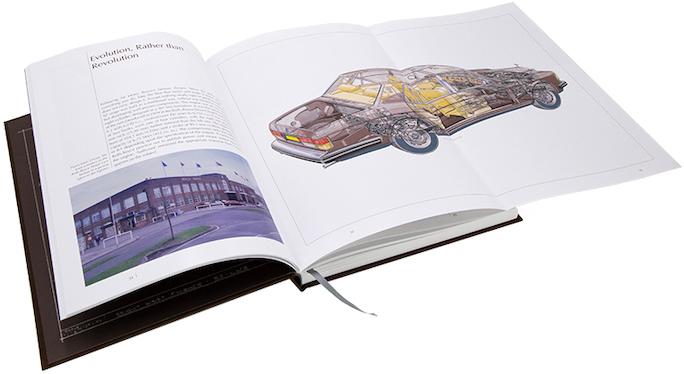 Heavyweight coated art paper is used throughout, which, while costly, is simply the best for photographic reproduction, especially so with color. Speaking of that, the vast majority of the photos in the book are in full color, as is the fold-out cut-away. The relatively few b/w photos are historical in nature and appear to have come from the company’s archives, particularly the Styling Department. Photo reproduction, in a word, is superb as we’ve come to expect from Nubes Argentea. As for layout, not even a single photo bleeds across the gutter. Captions are commendably short and are uniformly located in the outer margin, either beside or above the few photos that utilize the full page width, making good use of what would otherwise be wasted white space. Photo credits occupy the final page. There is no bibliography nor index. 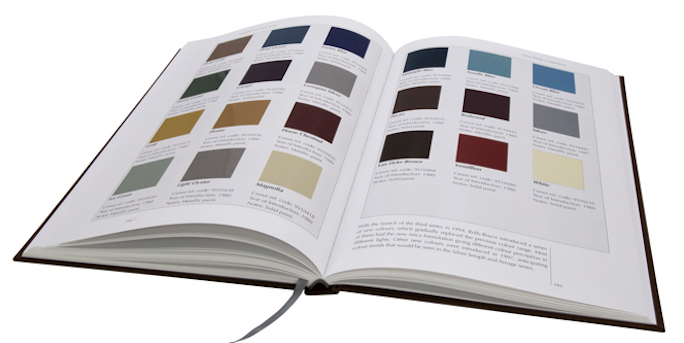 A nice feature of the Great Models series of books is the inclusion of samples of all paint and hide colors offered by the factory. In comparing them with my own car I found them to be highly accurate, despite the necessary disclaimer that, being reproduced here in a different medium, they cannot be 100% accurate and thus should not be taken as authoritative. They are certainly accurate enough to give the reader more than just a vague idea of how they appear in “real life.” The costs involved in doing this as accurately as modern printing technologies allow has got to be quite high and certainly explains part of the price. Another nice feature is one we’ve also come to expect: the sewn-in bookmark ribbon; always an appreciated finishing touch.

The standard issue (slipcased, as are all the Great Models series books) is limited to 500 copies. If you are fortunate enough to be the custodian of one of these modern-day manifestations of the coachbuilder’s art and desire a book of comparable quality and craftsmanship fully befitting the car itself, this is your opportunity. It is highly recommended that you do so sooner rather than later, while they are still readily available. More than half of the 500 copies printed sold in the first three weeks of availability.

At 220 Euros (including express shipping to US addresses), the book is by no means inexpensive, but then, neither are the cars it covers, so there may be some justification there as the production standards are similar. At the time I purchased my copy (directly from the publisher) the exchange rate translated to $272 US dollars and change (shipping included), or a bit more than $1/page. Reasonable, considering the quality. Signed copies can be requested from the author. Also available in a special leather edition of 15 copies in clamshell box, €400.

Companion volumes on the other post-WWII models will appear in due course.

Recommended related reading: Inside the Rolls-Royce and Bentley Styling Department by former chief stylist Graham Hull who provides the ultimate insider’s view of what was going on during this often turbulent era in the company’s history, and Richard Vaughan’s Rolls-Royce and Bentley in the Eighties and Nineties with its plethora of photos of virtually all models, permutations, and details thereof, including many of the elusive Brunei cars and other notable oddities.