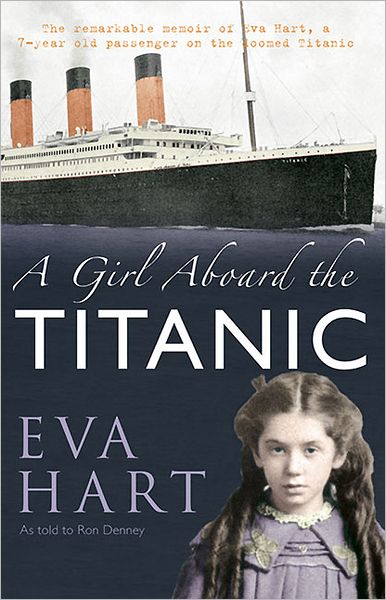 “Throughout it all the Titanic casts its spell, showing that it cannot be forgotten or ignored even after all these years. Miss Hart does not seek to allay that spell, but to show in her own way that if one is given a life to live it should be lived to the full, without regret, with fortitude, good humour and a sense of public responsibility.”

Even if all you know of RMS Titanic is James Cameron’s 1997 movie about its sinking on her maiden voyage in 1912, you’d have come across Eva Hart, in a scene of a father directing his daughter to hold on to her mother. If you know a bit more of Titanic history you’ll recognize Hart as one of the youngest, and consequently longest-living survivors (d. 1996), and perhaps even as a vocal and persistent critic for much of her adult life of the White Star Line’s recklessness in providing an inadequate quantity of lifeboats. Hart was equally critical of the potential of salvage attempts following the 1985 discovery of the wreck leading to commercial exploitation and desecration of a gravesite.

Eva Miriam Hart MBE says it took her forty years before she could talk openly about the tragedy which she and her mother survived but her father did not. This account is, in fact, the only one from a juvenile eyewitness but the book contains precious little about the incident proper. First published in 1994 and now in its third edition with minor changes it is a biography of her entire life which was forever affected by the events that unfolded in only a few short hours when she was seven. The sinking of the boat and the aftermath make up the smallest portion of the book and anyone expecting great detail or insight will probably be disappointed. Hart’s many recorded interviews over the course of her life offer a great deal more, as does her mother Esther’s 1912 account in her hometown news magazine the Ilford Graphic and elsewhere.

If one were to remove the Titanic angle one would be left with a book about a woman’s life choices and career path, a perfectly worthwhile subject, but not what one would expect based on the title of this edition. It is of course undeniable that the “Shadow of the Titanic” (which was, in fact, the title of the original book and really more indicative of its scope) both cast a pall over Hart’s life and also motivated her (she worked as an industrial welfare officer and Justice of the Peace and did much charity and volunteer work). At times the tone sounds a bit self-laudatory and one can only wish—in light of the above quote—that this is merely a function of writing style (or possibly the no-BS attitude that comes with age) and not flawed character.

Denney, for whom this is the first biography among some 20 books on a variety of topics, is a long-time friend and wholly sympathetic chronicler. He says right in the Preface that “the ship and its short existence play a major role in the book, but in only a supporting role. One side of the Titanic disaster that has never been adequately covered has been the aftermath on the people affected by the tragedy and at this late stage that can probably never be fully treated.” This is true, and on that score, Hart’s recollections do paint a picture of her and her mother’s efforts at rebuilding their lives upon returning to England, both in practical and psychological terms.

Sixteen pages of b/w photos and drawings are bundled into a stand-alone section. Appended are an account by an occupant of Hart’s lifeboat excerpted from another book and a brief overview of the three White Star liners Olympic, Titanic, and Britannic. Extensive Bibliography (although it must be realized that the literature is almost immeasurably vast; this same publisher alone has several titles); no Index.