The Handley Page Victor: The History and Development of a Classic Jet, Vol. 2 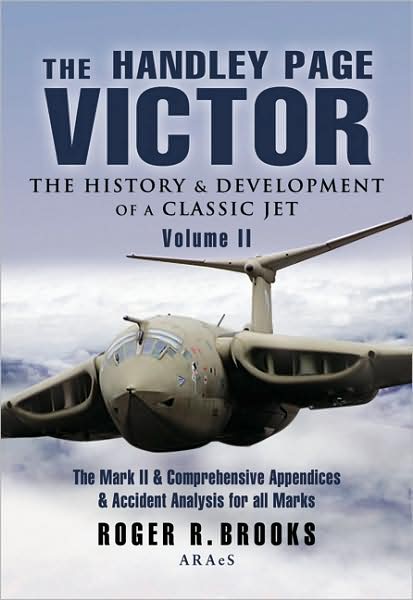 This is the second of two volumes of Data Files covering the 86 Victors produced (of 500 once envisioned) to carry their nuclear payload higher, faster, further than any other aircraft and serve as Britain’s Cold War-era nuclear deterrent. Neither the first and certainly not this second volume are meant to be read cover to cover but to be consulted for reference and research.

Legendary American aircraft designer (P-51, F86, X-15, Apollo capsule etc.) Lee Attwood (d. 1999)—who upon shaking your hand liked to exclaim, “You just shook the hand that shook the hand of Wilbur Wright!”—late in his life looked over a Victor in great detail and pronounced it “very pretty but a total waste of time” and “well designed but useless aerodynamically!” This would not have sat well with Handley Page Ltd. whose motto was “Unassailable Aerodynamical Logic.” Be that as it may, it didn’t stop Andre Tempest, who wrote the Foreword to this book, from buying one when the RAF sold them for scrap in 1993. And he was only 25. And he’s not even a pilot. Which is just as well; since his K.2 Victor isn’t flyable he doesn’t have to care about aerodynamics. This proprietor of The Old Star Garage near Leeds just likes it, and other big toys: he’s been instrumental in the restoration of a Fairey Gannet, a Buccaneer, and Hurricane and Spitfire replicas at the Yorkshire Air Museum where XL231 Lusty Lindy is hangared these days. Every 28 days he and his team—among whom author Brooks—run up run the engines, and whenever they have enough money to burn (literally!) they entertain themselves by taxiing her down the runway at up to near take-off speed and then pop her enormous braking parachute. The Foreword says nothing about any of this—a lost opportunity to inspire readers outside the Victor community!

It is these self-styled “Victor Nuts” who will linger over every morsel in this second volume. Lesser mortals, who probably didn’t exactly consider vol. 1 bedtime reading, will slightly shudder at the vast amount of data presented here. The title referring to the appendices as “comprehensive” is no understatement: they make up 2/3 of the book!

Vol. 1 having exhaustively covered the Mk1, the first third of vol. 2 examines the Mk2 series, comparing it to the Mk2 iterations of the other two types—Valiant and Vulcan—that made up Britain’s V Force. Tactical and operational parameters and an overview of technical and production specs (bristling with charts, graphs, tables) precede a brief survey of the modifications that distinguish the variants. Each airframe’s development life is enumerated; this is just strings of dates and names of tests.

Every now and then a bit of narrative introduces a new chunk of data. All this is amply illustrated with technical drawings; photos of aircraft being built, flown or serviced; and ephemera such as fuel order cards and various certificates etc. Control panels are shown on photos and in drawings, both, however, too small to tell the uninitiated anything. This is even more true of the many technical drawings, but, again, the purpose of this book is not to use them as building blocks for any sort of “story” but to introduce such material into the record. To the aviation history- and engineering-minded reader, these sorts of things really are immensely important. Even the casual bystander will find a good deal of this relatable and certainly interesting—just skip the pages and pages of flight test data in microscopically small type and lists of modifications down to the last o-ring. Look instead for the always gripping accident reports or general-interest topics such as ejection seats, tanker operations, mission profiles and the like.

A 2-page list of abbreviations opens the book, 7 pages of 13 color profiles by artist David Windle (left and right side views) close it. Color photos are bundled into one 16-page section, including one of 1991 Gulf War nose art.

If you have only a passing interest in the Victor, this book is overkill. For anyone else it is manna from heaven. And if you think Andre Tempest and his band of brothers are on to something trying to restore and maintain Lusty Lindy, follow her progress on the Internet (good luck explaining that name in your browser history to your significant other)!

The Handley Page Victor: The History and Development of a Classic Jet, Vol. 1 »
« 100 Years of the British Automobile Racing Club