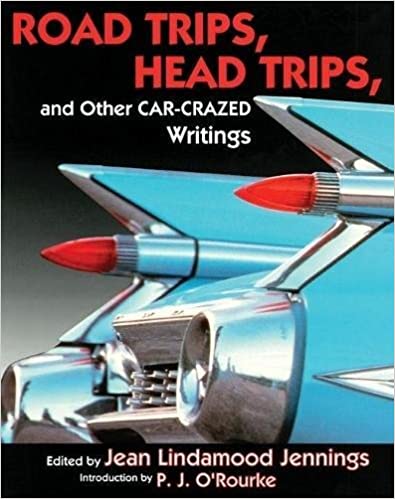 Jean Lindamood Jennings was already a respected car journalist when she assembled this 255-page collection of 36 articles, in 1996. Her contributors range from big-league authors like Perelman, Ginsberg, and Kerouac to those writers whose prose illuminated the lives of smaller, more niche audiences. But when you read the index and note that even—even—those names  include  Leonard Setright, Griffith Borgeson and David E. Davis, you know you will be taking  a proper road trip, and with the best of travelling companions.

A confession. I read a lot of books about cars and motorsport, I enjoy many, perhaps even most of them, and over the last year or two I’ve been privileged to write reviews about them on speedreaders.info. But here’s the thing—only very rarely do I want to re-read these books, because most car and motorsport titles are long on content but short on style. Once I have osmosed all the facts the  author has so painstakingly garnered about driver X or car Y, there’s rarely a temptation to revisit not just what has been said, but how it was said. But Road Trips’ feverish, and (dare I say it?) dated title belies the fact that I haven’t found a better-curated collection of car-themed writing anywhere else. My own copy’s dog-eared, well-thumbed appearance attests to the number of times I have been tempted to dip into its pages since buying it over 25 years ago. The only place I can find a similar hit is in the pages of old copies of CAR, Car and Driver, and Motor Sport magazines (inter alia) which have annexed a spare bedroom at Maison Aston. But, dear Lord, I have to wade through some dross to find the good stuff. Hands up, if you can remember the interminable Wartime Diaries of an RFC Officer which dear old Bill Boddy assumed his Motor Sport readership would enjoy. An entirely erroneous assumption, as it turned out. 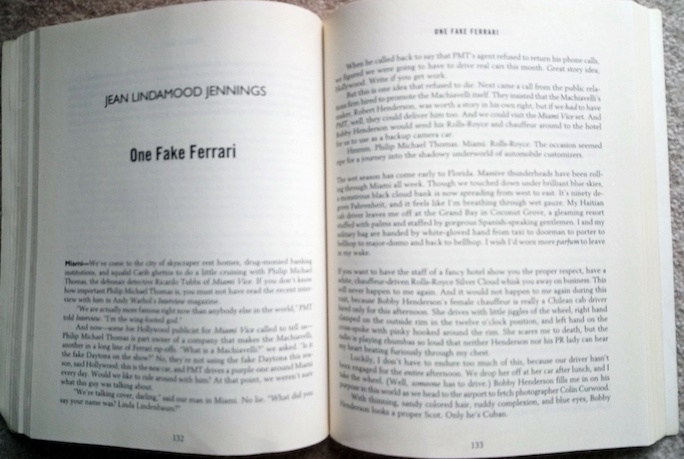 The book is divided into five notional categories, ranging from “Man versus Machine” to “Sound and Fury” but many individual stories could just as easily belong to two or more categories. The Great GP Trek, by Peter Egan, describes an ad hoc journey by bicycle from Paris to Barcelona for the 1971 Grand Prix and the experience of pedalling south through rural France is portrayed with the same charm and insight that is applied to the laissez faire intimacy of the Formula 1 paddock of the time. Can you imagine a scene like this in the next Grand Prix (wherever and whenever that may be, in our brave new world of pandemic lockdown)? “Just across the way, Rob Walker and John Surtees conferred with the Brooke Bond Oxo Surtees team’s other driver, Rolf Stommelen. I stood next to them, while they talked, like Woody Allen’s Zelig.” FYI, Egan was then a penniless young American with no special pass nor privilege, whom the Guardia Civil had been happy to admit to the Grand Prix paddock.

I mentioned the inclusion of big beasts such as Ginsberg, Perelman, and Kerouac but I didn’t feel the book was greatly enhanced by their presence. I bow to no-one in my love of Hemingway but, if I need a fix of his prose, I’ll get it from A Moveable Feast rather than Hem’s throwaway piece entitled Car Prestige. This mercifully short piece serves only to remind us that the author’s death did not leave a Hemingway-shaped gap in the pantheon of great comic writers. But Steinbeck’s Travels with Charley is a pleasing example of another Great American Novelist’s work, describing the author’s cross country adventures in Rocinante, the GMC pickup named after Don Quixote’s faithful horse. This was written in 1962, so perhaps later than you might imagine, and it portrayed how the highway created its own community—“For the truckers cruise over the surface of the nation without being a part of it …. I soon learned not to expect knowledge of the country they passed through.”But Hunter S. Thompson’s Back Door Beauty … And Finally a Bit of Serious Drag Racing on the Stripserved only to confirm what a tiresome one-trick pony that writer could be. I’d trade Thompsons’ gonzo schtick for William Least-Heat Moon’s magic realism in the sublime Blue Highways, the 1982 book that redefined how the American travel book might read. I was surprised that Least-Heat Moon’s adventures in Ghost, his Ford truck, author armed only with a Rand McNally road atlas and a notebook, were not featured.

But enough of my carping already, because two stories alone make Road Trips an essential read for anybody with a trace of petrol in their veins. OK, “gasoline” if you will. We say petrolhead, you say gearhead,  but let’s not call the whole thing off, eh? The first piece in the book is not only my favorite, but it is also the best thing David E Davis ever wrote and, as you know, the doyen of US auto journalism wrote a lot, and he wrote everything well. The Freedom of Wild Ducks is the most lyrical description I have ever read of the elemental joy of driving an open car down empty highways, and how the act of doing so endows the driver with a sense of freedom that is unattainable by any other means. I have read a lot of Davis’ work, but Freedom is sui generis, because I don’t think he wrote anything else that resembled this work in even the smallest respect. This is the proof: “In an open car we enjoy the heightened freedom of the coursing hound, racing across the land with only the wind for clothing. It is the freedom of wild ducks, shining in their colorful plumage, flying at impossible speeds through the treetops to impress the duck-women they love.” But, just as your suspicion increases about what the author was smoking at the time, you are reassured by some classic Davis prose as he describes the service manager in the car dealership in which he once was involved. “From what I knew of this guy, he loved four things; three were tattered BMW 328 sports cars and the fourth was any woman who would go home with him … but the mind boggles  at what she must have felt when … she  saw that they would be sharing the single bed with a cylinder head and a bouquet of pushrods.”

Before reading this book I confess I had never heard of the late Bob Ottum. In mitigation I can only plead that I’m a Brit, and that if Ottum’s name had crossed the Atlantic, it must have registered as more of a ripple than a wave. That is my loss, because the second big reason for buying this book is Ottum’s sublime contribution, which is entitled Heck, Mes Amis, It’s Only Ol’ Cale. This is an account of NASCAR racer Cale Yarborough’s participation in the 1981 Le Mans 24 Hours, driving the thunderous Chevy Camaro which he had cranked down the Mulsanne Straight at up to 220 mph. Cale allowed that “Well, I didn’t come over here to poke around; I could be back on my farm, poking round on my combine.” Thus begins the funniest account I have ever read of a driver’s participation in a motor race—including, no, especially including, Peter Ustinov’s heroically overrated recording The Grand Prix of Gibraltar. The fact that Yarborough was en famille, on a very first trip to Europe, and that the family was to stay in the sixteenth century Chateau Vize makes the culture clash all the more delicious. Cale’s wife Betty Jo, from Timmonsville, South Carolina, remarks to her hostess, the imperious Madame Launey “I swear, there sure is a lot of French Provincial Furniture in here, isn’t there? … But then, I guess, that figures doesn’t it?” The race may have ended badly—“Honey, ah crashed”—but the story is a masterclass of reportage and a highlight of the anthology.

With a typically punchy introduction by PJ O’Rourke (“Cars have allowed ninety-odd years of O’Rourkes to earn a living without heavy lifting”), this anthology has a rightful place in the library of every car guy. Or gal, actually. Because, as Lindamood Jennings herself says, “Car stuff is usually guy stuff, right? Well, I’ve been doing car stuff for a living for the past twenty four years, so I’m your guy on this one.” She sure is …