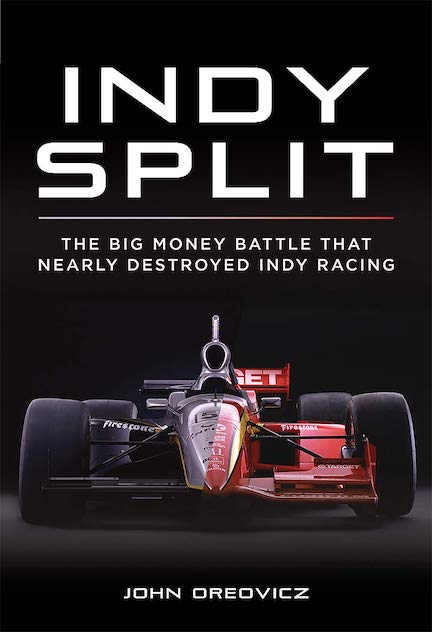 “By all rights and considering the longevity. history, dramatics, and sheer speed, open-wheel racing so far of NASCAR that it would take the world’s finest telescope for the stock car set to even see the back of the IndyCar field.

But because open-wheel racing has, for the most part, been run by the wrong people for most of the past century, IndyCar lags behind NASCAR in American awareness, sponsorships, television ratings, and attendance.”

Gulp. This is how the book opens. Guns blazing and all. Each of these sentences, except for the last couple of words enough to start arguments. And they’re not even the author’s words, although they could be—there’s not much daylight between John Oreovicz and Foreword writer Robin Miller. That would be Robin Lee Miller, motorsports journalist, IndyCar pit crew member, USAC midget racer, and the fellow dismissed from a 30-year reporting gig at The Indianapolis Star over matters pretty much related to what his Foreword is about. The reason to even mention this is to establish that this is not a quiet little book politely dusting off bits of arcane academic history.

That this book is getting into bookstores just in time for the 105th running of the Indianapolis 500 is of course not coincidence but the calendar date more pertinent to its raison d’être is that 2021 marks the 25th anniversary of the inaugural IRL season, the consequence of open-wheel racing in these United States becoming anything but united: the Indy Racing League on one side and CART on the other, the latter having itself split off from USAC earlier. It is not a pretty story. In fact, after weighing the arguments the author puts forth, even the most charitable of souls will find it difficult to not take sides.

That said, you can’t help but wonder if the proverbial man in the street—make that the grandstand—gives a hoot. The Indy 500 bills itself as the largest single-day sporting event in the world. Speedway management doesn’t disclose official attendance numbers but the permanent seating capacity is upwards of 250,000 . . . do these folks really loose sleep/blow a fuse/roll up their shirtsleeves over backroom shenanigans?

Oreovicz turned a boyhood interest in racing and cars into a professional career as motorsports reporter, broadcaster, commentator, analyst. He even lives within walking distance of the Indianapolis Motor Speedway so Indy car racing is never far from his mind. He has dug deep to string together this gut punch of a story, and it is probably reasonable to say that even those people who do know, and care about the business side of things will be surprised to read that conflicts (of interests, priorities) of various sorts pre-date the IRL/CART controversy of 1996 by decades, going back all the way to when one Tony Hulman‘s investment in 1945 saved the Speedway from the real estate developers to whom then-owner Eddie Rickenbacker would have otherwise sold the property. He installed the man who had brought him the deal, Wilbur Shaw, as his General Manager, and if Shaw hadn’t unexpectedly died, Hulman would would not have been forced into a more active role, which would result in subsequent generations of Hulmans treating the IMS as their fiefdom. (“. . . so inbred and insulated to outside influences after 28 years that it has come to view itself as omniscient and has become incapable of making needed changes.” —journalist Dave Overpeck in The Indianapolis Star, 1973)

The book begins with a two-chapter-long setting of the scene. There is no merit delving into any particular string of details presented in the book. Agree with him about The Split or not, Oreovicz has done his homework, he has a wide frame of reference, and that he has a point of view does not undermine the validity of the case he lays out. Even if you will only concede to Salomonian middle ground and “agree to disagree,” you cannot possibly argue that Roger Penske now being the owner of the Speedway and the IndyCar Series isn’t, finally, the much-needed reset.

This is an Octane Press book, meaning Bibliography—check, Index—check (and a really fine one too! The subentries under <Penske> alone are a thing to marvel at: “actions of,” “appeal of,” “legacy of,” “Lola chassis and” etc. etc. etc.).

Random observation: Oreovicz weaves quite a bit of race reportage into his exposition. Added entertainment can be had by having another recent book to hand, 500 on (the Indy) 500, which, not least, adds a lot more photos. (And, just by the by, the fellow who wrote the Foreword to that book has meanwhile won the 105th running, Helio Castroneves!)