The Man Who Supercharged Bond: The Extraordinary Story of Charles Amherst Villiers 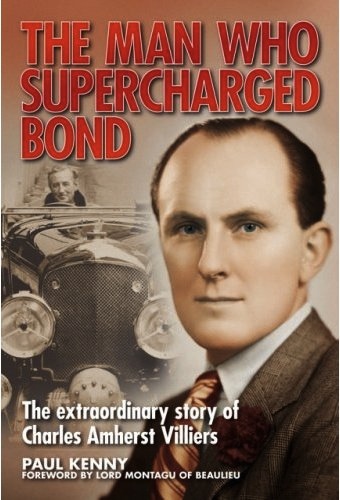 The Bond in the title is “Bond, James Bond”, created by Ian Fleming who was a friend of Amherst Villiers (pronounced Villers). Naturally, Fleming chose a Villiers-supercharged W.O. Bentley for Bond in his book Casino Royale that was later made into the iconic film of the same name. Given this and other connections it is indeed exactly as Lord Montagu writes in his Foreword, an “overdue account of an extraordinary man.” You can say that again.

Villiers (1900–91) was born to parents of an aristocratic and upper class background with a connection to Winston Churchill. He was educated at the famous Oundle School (where he met Raymond Mays) and Cambridge University which he left before taking his degree. His engineering endeavors grew at both establishments. From this point and for many years Mays and Villiers teamed up to create legendary racing and sprint cars which enabled Mays to build up a sparkling series of record runs at Shelsley Walsh, Brooklands, and elsewhere. The Hillman “Quicksilver”, Bugattis “Cordon Bleu” and “Cordon Rouge”, A.C., and then Villiers’ first supercharging project the Vauxhall “Villiers”, are in the annals. Villiers’ work on the Bugattis attracted Ettoré himself and Villiers spent some time under Le Patron’s guidance at Molsheim.

Various paid jobs at engineering companies in England and on the Continent came and went—Villiers never stuck around for long. He described himself as “a projects man” and one of his projects was designing Malcolm Campbell’s “Bluebird” land speed record car. His input into the car remained after many changes by later designers but Villiers left in a cloud, an early instance of the characteristic that denied him lasting success (fame he gained aplenty): an inability to practice just a little humility and thus work more smoothly alongside other people.

There followed the legendary Blower Bentleys for privateer racer Sir Henry “Tim” Birkin, the subsequent dispute with Bentley Motors over recognition of Villiers’ input, and then his new career in aeronautical engineering (he was also a pilot) designing power plants and later a double-decker transatlantic airliner. At the end of World War Two he was in the US and embarked on a lengthy period in the aeronautical and rocketry industries there. Multi-talented, he mastered classical painting well enough to turn it into another career. Returning to England in 1960 he was soon studying under the famous painter Pietro Annigoni. Villiers’ portraits of Ian Fleming, racing driver Graham Hill, and Pope John Paul II brought him almost instant fame. Then he returned to motor racing by working for BRM as a consultant engineer, a further stint in the US with Douglas Aircraft on space missions and then finally permanent life in England. Still he wasn’t done—he designed a turbocharged conversion of a Rolls-Royce Phantom III (chassis 3AZ138, with a new body similar to the one he fitted to the ex-Capt. Kruse Phantom I in 1932 when Villiers’ himself owned it) and unwittingly laid the groundwork for a bitter dispute with Rolls-Royce Motors who were to complete the car.

You couldn’t make up the incredible strands in Villiers’ life and the sheer range of his mental abilities. Paul Kenny, a lifelong motor racing enthusiast who became interested in Villiers after seeing his paintings of Hill and Fleming in London’s national Portrait Gallery and only then learned of Villier’s engineering work, has written a really wonderful story, both comprehensive and clear, setting a pace that Villiers’ life demanded. Whilst broadly chronological, chapters on themes in Villiers’ life allow the author to straddle periods. His mastery of the material is total. Most of us would be dazzled by Villiers’ accomplishments, and rightly so. Kenny tries to unravel the psychological complications that prevented Villiers’ having the complete success he was capable of, and ends with a very fair tribute to a remarkable man.

The photos, all but a few b/w, are bundled into two sections (a typical Haynes treatment); there are extensive notes and sources and a deep bibliography as well as a satisfyingly detailed index. An added bonus for those who wish to avail themselves; personally dedicated copies of this book are available for £34 directly from the author in the UK who can be contacted by sending an e-mail to sales@themanwhosuperchargedbond.com.

Copyright 2009 (speedreaders.info) Edited and adapted with permission from review by Tom Clarke, originally published in the November/December 2009 issue of The Flying Lady, the periodical of the Rolls-Royce Owners Club (RROC/USA)
(Reviewer Clarke, a recognized Rolls-Royce scholar, has himself authored several books and countless articles along with providing help and guidance on other book projects.)