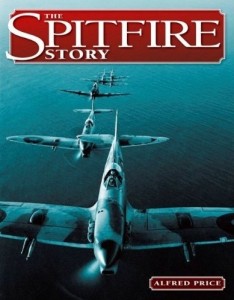 Old or new, military or civilian, no matter your interests in aviation you know of the Spitfire and the singular place it occupies in aviation history. Its famous Rolls-Royce engines, its famous Schneider Trophy connection, its famous Battle of Britain role. Capable, and good-looking to boot. Several are airworthy still today, and the sight and sound of one will grab your imagination more than few other manufactured things.

If one really had to settle for just one single book on the subject, this one could be recommended without reservation.

“Moreover, the Spitfire became an international legend within its own service lifetime and so its history has been susceptible to some distortions by the impact of legend.”

The people most closely associated with the very existence of the aircraft, such as Chief Test Pilot Jeffrey Quill and others on the design/development end, who know every nut and bolt and every quirk and shortcoming of the plane have nothing but respect for the author, an aviation historian and Fellow of the Royal Historical Society with over 40 books to his name.

Of his several books about the Spitfire, this one is the most comprehensive, overarching account of its evolution and development. First published in 1982 (Jane’s) and again in 1995 (Arms & Armour Press) this latest edition is fully revised and expanded. Already the first edition materially advanced the body of knowledge, both by introducing new material—some of which not even known to have survived the war—into the record and by refuting, by virtue of more thorough research, certain abbreviated and thus misleading ways of uncritically mythologizing the aircraft that had already crept into the vast body of literature. Most especially he takes issue with the notion that the overall development and production was not hampered by problems (an easy-to-understand but overly romantic idea subscribed to by writers who want to believe that the pressures of war and the unity of purpose among people associated with a project firmly understood to be of vital, literally life-or-death importance would have made men better men, free from the vices of personal and bureaucratic strife). Price is also clearheaded enough to say that not every of the 22 Spitfire versions was equally competent. He also makes it a special point to avoid the inconsistencies in regard to performance numbers and parameters evident in other books by explaining his frame of reference and then applying it consistently.

This new edition adds material that has come to light in recent years, both photos and accounts from private sources that have either been made public or been found in archives since. The Spit had an uncommonly long life cycle, 1935–1948, and over 20,400 ships were built in 22 Marks (24 if you count Marks 15 and 17 that were related to the naval version, the Seafire). The book covers all Marks but to keep the complex subject manageable does not concern itself with the Seafire or either plane’s successor, i.e. the Spiteful and Seafang. It also touches only briefly upon the engines, Rolls-Royce’s Merlin and Griffon.

The book is very readable—but also very thorough which means it is quite technical in regard to certain specific aspects. A reader new to the subject of aircraft performance would be well advised to have access to a book of general design/engineering principles, especially airfoils (the wing, especially the wing root and thickness, being key factors in the Spitfire’s agility).

The aforementioned Jeffrey Quill (d. 1996) wrote the Foreword and is quoted extensively. The Introduction is by Gordon Mitchell, son of Spitfire designer Reginald J. Mitchell who sadly died too young (in 1937 at age 42, of cancer) to see much of what would become of his plane. Each chapter but the last, which contains closing remarks, has its own multiple appendices containing supplementary material, usually in the form of primary sources such as Air Ministry requirements, technical/performance specs, field notes, memos etc. In addition to the many photos there are a few pieces of line art, some from Supermarine and some specifically drawn for this book by Peter Endsleigh Castle and Harry Robinson along with a splendid double-page cutaway by Mark Rolfe. A Bibliography lists published and unpublished sources; the Index is a bit on the brief side but lists everything that is truly important.