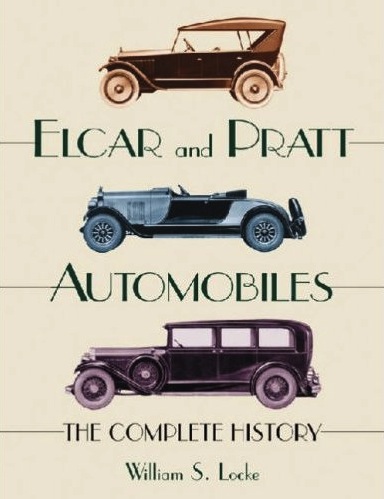 This comprehensive, large format 332-page book was originally published in 2000 as an illustrated case-bound edition, then reprinted in 2007 in this softcover format. The author, William S. Locke, has done an excellent job in pulling together a great deal of information about the history of this successful but now forgotten assembled car manufacturer. Twenty-four chapters cover everything from “Self-Propelled Buggies,” “Pratt Automobiles,” “Eight-In-Line,” “The Race Cars,” “Elcar Overseas,” “Elcar In Trouble,” and various other interesting sidelines. These sideline chapters include bicycles, motorcycles, motorboats, the Lever engine, a Mercer revival prototype in 1931, and the unrelated Elcar trailers and the little golf cart-sized electric Elcars sold in the US from 1972 to 1977.

Elcar and Pratt automobiles were high-quality assembled vehicles that were sold to the public at very competitive prices both directly from the factory, and indirectly through scattered dealerships. Since 1873 the Pratt family had owned the profitable Elkhart Carriage and Harness Manufacturing Company in Elkhart, Indiana, based on direct sales to farmers and others nationwide. As the Pratts watched the shift in consumer desire toward cars, they made the switch themselves into auto manufacturing 1908. However, rather than invest heavily in the expensive tooling to manufacture the engine and drive train themselves, they concentrated on what they did best, building the fashionable bodies that went onto the chassis. All mechanical components for their vehicles were purchased from established suppliers. The result was a skillfully assembled, reasonably priced car that was reliable.

From 1908 to 1919 the company made solid profits and everyone involved prospered. By 1922 the Pratt brothers had reached retirement age and decided to sell out their remaining interest in the business and move to California and elsewhere, just in time to avoid the short post-World War I recession that put a stake through the hearts of many marginal auto makers. The Elcar Car Company was saved from that fate by an infusion of money and talented employees from the struggling Auburn Car Company. The new owners met with immediate success at Elcar by, among other things, copying the Rolls-Royce radiator on their new product offerings. Sales regained momentum until the late 1920s, when major loans could not be paid back and the creditors closed in, applying the coup d’etat in 1931. Taxi sales lasted until 1933, then the last vestige of the Pratt and Elcar Car Company faded away into history.

Photos are prolific, generally good, and show all the basic models offered to the public over the life of the company. A color photo section in the middle of the book displays 20 restored examples of the make, from the third auto buggy manufactured to the last known example, a 1932 Model 100 Coupe sold after the bankruptcy receivers had already closed the factory doors. Poignantly pictured in the “Surviving Vehicles” chapter are 61 examples of Pratt and Elcar vehicles known to exist out of an estimated 35,000 produced. Within the text the photos are not always on the same page as the copy, causing the reader to flip back and forth to see what is being discussed. The photos are also frequently amateur shots collected for the book and suffer from low resolution and/or lack of sharp focus. What the pictures show, however, makes their inclusion worthwhile, enriching and personalizing the story.

The last 100 pages are made up of appendices that cover everything from “Engines Used” to “Biographical Sketches” of the key personalities. Early 1930s gangland murders in the New York City taxi business killed two of the company’s important customers, helping to bury the remains of Elcar in an ever expanding auto cemetery populated with victims of the economic ruthlessness of the 1930s Depression era. From conservative carriage building in the 1800s to gangland murders in the 1930s, the reader is carried along until the final ride. The book is gracefully written in a flowing style befitting the time period.

The book starts with the Table of Contents, followed by a Preface, Acknowledgments, 14 chapters, an 8-page center color photo section, then 10 more chapters and 11 Appendices. The book ends with a Bibliographic Chronology and Index. Hundreds of photos, good organization, excitement and adventure—this book has it all.