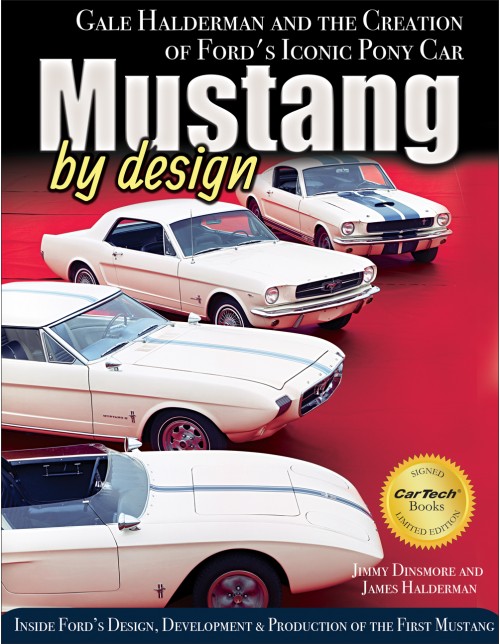 “‘I’ll never make it here.’ That’s what Gale thought when he first arrived for work at the Ford Design Studio, grease pencil in hand.”

Satisfying, engaging, interesting, instructive, and enjoyable; all are adjectives that apply to this book about Gale Halderman and the creation of Fords iconic pony car.

At the outset your commentator hadn’t been sure of what the pages would reveal since seemingly the basic facts had been well covered in prior books—especially the McFarland 2010-published Mustang Genesis, The Creation of the Pony Car by Robert Fria. But where Fria’s (a bit more on him in next paragraph) book was written from the perspective of the outside looking in, this book is just the opposite for Gale Halderman can only be described as the ultimate insider, credited with being the key designer of that very first—and several succeeding generations of—Mustang.

Fria wrote his book while he was the owner of the first pre-production hardtop Mustang to be assigned a VIN (below). Since discovering and acquiring the car in 1997, Fria researched and established its provenance, then fully restored it and shared his research in his Mustang Genesis book. Ultimately he consigned the car and sold it January 2019 at the Barrett-Jackson Scottsdale sale. 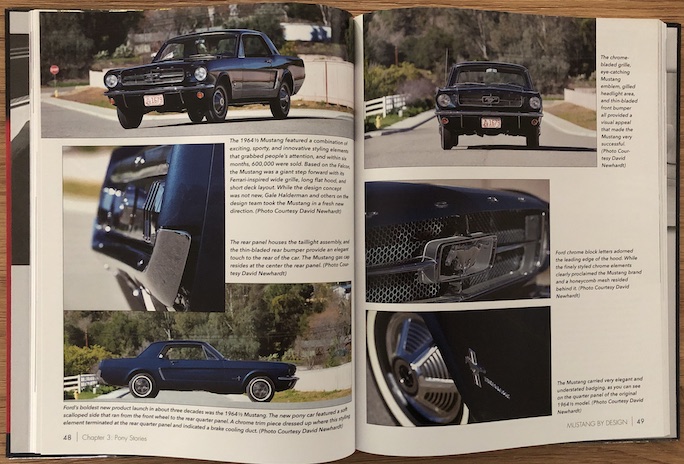 Unfamiliar with either of this book’s authors, your commentator engaged in a bit of independent research and discovered this may have been as most perfect a pairing as one could wish for.

Dinsmore is a relatively new auto writer. He writes a column for dailies and prides himself on connecting with his readers’ needs and interests as they shop for new cars. You can hear and take the measure of Jimmy Dinsmore for yourself on www.CarsYeah.com (click Visitor and then in Search type Dinsmore’s name) where he talks about himself and this, his first book and reveals he is particularly weak in the engineering and mechanical aspects of the automobile.

Co-author James Halderman has that technical experience and knowledge. He is a member of the Society of Automotive Engineers, an ASE-certified master technician, and has authored approaching 20 automotive textbooks and has his own impressive website. And, yes, he’s related to Gale Halderman, the subject of this book. Of the relationship, James has said: “Our fathers were brothers. In the book, there’s a mention of advice my father gave to Gale as he started his job at Ford. Gale was like a big brother to me and in many ways inspired my passion for cars. It’s such a point of pride for me and my entire family to have Gale’s story told.”

The physical book is just what we’ve come to expect from publisher CarTech with pages sharing the story on good quality paper that feature attractive layouts and high-quality printing. And as CarTech anticipates its books will be read, re-read, and consulted with frequency, the binding is of a caliber that will stand up to use.

By all accounts Gale Halderman is essentially an easy-going, affable person who also possesses great talent and ability in his chosen profession. The former traits served him well as an executive for he could and did handle with aplomb the pressures and personalities, from above as well as those he worked with or supervised, with seeming ease. His talent showed itself early and Ford Motor Company hired him as a designer in 1954 before he’d even completed his studies at Dayton Art Institute. 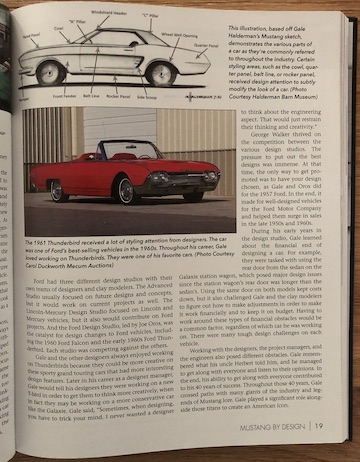 By the time Ford design studios were deep into finalizing designs for the 1965 product line, Halderman’s responsibilities were as Design Manager. This meant he went from studio to studio each workday overseeing and supervising progress. His days were full. He had no time to take on additional assignments yet that was precisely what his boss Joe Oros placed on his desk. And as the request had come through Oros directly from Lee Iacocca, then Ford’s VP heading the Car and Truck Group, Gale Halderman took the work home and created the requested design proposals one night late at his kitchen table.

The book spells out all the details, both before and after. Suffice to say here, one of those drawings became the 1965 Mustang! 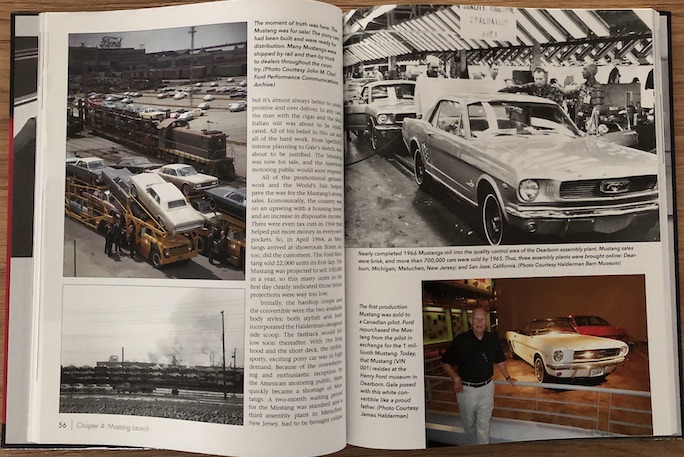 The book goes on to chronicle succeeding models and generations of Mustang and Halderman’s involvement with them as well as with other car lines. It also describes in detail Ford’s design process—then and now. Toward the book’s concluding chapters the reader has also arrived at Halderman’s retirement after 40 years designing Fords and Lincolns and Mercurys. But his story does not conclude there for in retirement Gale Halderman returned to his family property outside Dayton, Ohio and created the Halderman Barn Museum. In The Barn (below) are mementos of his career, the long life of Mustang, and much more. You can learn more, including how to schedule a visit, at www.HaldermanMustang.com 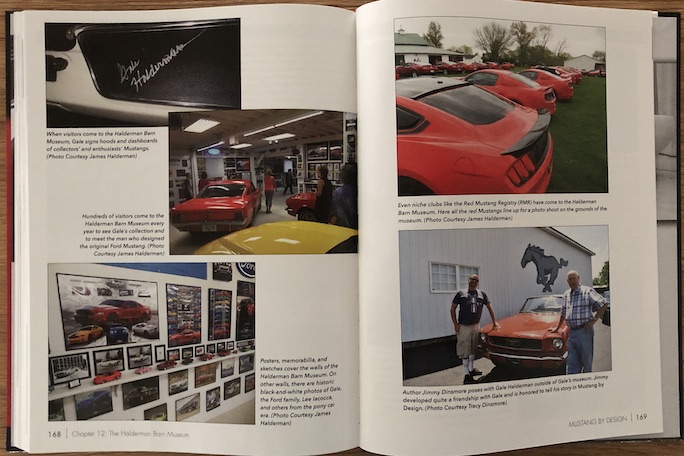 So, by way of this commentary you now have awareness of another fine book with which to spend some quality time in the comfort of your armchair. An added plus is you now have yet another destination when out and about exploring this land for Dayton, Ohio is considered the “birthplace of aviation” as it was where the Wright Brothers lived as can be seen in the Aviation Heritage National Historical Park and the nearby National Museum of the US Air Force which is considered the world’s largest and oldest military aviation museum.