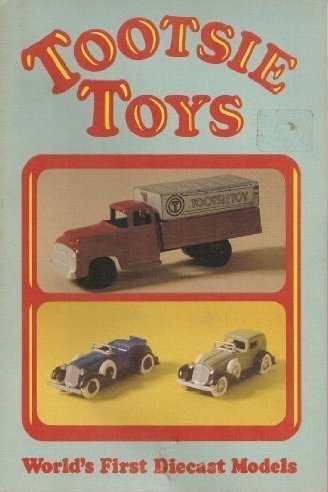 James Wieland and coauthor Edward Force’s little book is the first of its kind to not only trace the history of the company that produced the Tootsietoys diecast toys and models but also focuses on interesting features of individual models, providing a valuable reference for the collectors of these models.

James Wieland, born in 1946 in West Australia, is primarily a writer. He has published books on poetry, history, and articles and essays on a variety of literary topics. In 2018 he wrote his first adult fiction novel, Octet. He was the founding editor of Scarp, a literary magazine, and is now retired from academia. Wieland is also likely a Tootsietoy collector given his heartfelt descriptions of the toys.

Dr. Edward Force, born in 1938 in New York, was awarded a PhD in German Literature and taught German at Central Connecticut State University for 42 years. He also was a translator for Schiffer Publishing for 40 years. Force wrote the collector guide Dinky Toys, published by Schiffer in 2009. This was a concise history of that company and contained photos and prices of the toys at that time. Force passed away in 2013.

In 1876 Charles O. Dowst established Dowst and Co. in order to publish a trade paper, The National Laundry Journal. They soon began making laundry supplies as well. After Dowst discovered the Line-O-Type machine at the Chicago World’s Fair in 1893, he and his brother Samuel purchased one. They began making collar buttons and other items they could diecast with this new invention. Soon the company was able to diversify into items for the confection industry, and prizes for the popular Cracker Jack company.

By 1910, a second-generation Dowst, Ted, designed and produced the first diecast toy metal car. It wasn’t until the Model T Ford they put out in 1914 that the toy cars were based on real vehicles. Until 1920, all products were produced under the name Dowst, but the name Tootsie Toy was being applied to some of the products.

In 1926, the company was sold to Nathan Shure, who merged it with his company Cosmo Toy & Novelty but kept the name Dowst Manufacturing Company and also retained Ted Dowst who would remain with the company until 1945 when he retired as the president of the firm. The company name was changed one more time in 1964, to Strombecker Corporation, however the Tootsietoy trade name has been kept throughout. After the start of WWll, in 1942, all toy manufacturing was discontinued, as materials were needed for the military. Production was not resumed until late 1945. As a result, all Tootsie Toy vehicles produced before the war are considered more valuable or desirable to collectors. In 1935, Ted Durst was said to have made the statement, “We make toys for doodling, not models for collecting.” After resuming production after the war, the toy vehicles were designed as inexpensive toys not the detailed scale models before the war.

This book is divided into pre- and postwar sections, with photographs of models with their descriptions. There is text describing interesting information about the different toys. There are cars, trucks, tractors, buses, postal vans, delivery vans with company names, and even a cannon. The Appendix lists other Tootsie Toys that are not pictured.

This book is primarily geared to collectors, however anyone interested in these models and their creation and history would find this little book fascinating.

Posted Under: Other Genres, Out of Print | Author: Jeanie Jacobus | No comments yet