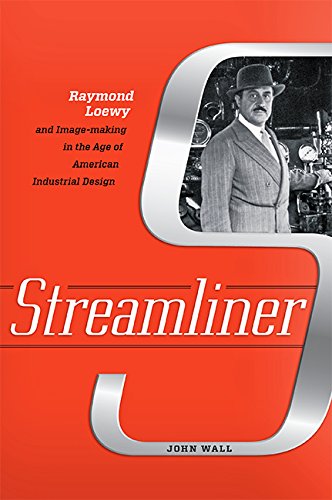 Time magazine featured Raymond Loewy on the cover of an October 1949 issue acknowledging him as “the father of industrial design.” Forty years later Loewy’s importance and influence had not waned. If anything his streamlining “most-advanced-yet-acceptable” (MAYA) approach to making items more “user friendly” and attractive, thus also “streamlining the sales curve” had enhanced his importance and in 1990 Life magazine designated him one of the “100 Most Important Americans of the 20th Century.”

When you look at pictures of designs Loewy created he feels contemporary even today. Yet he was born in 1893 and served in the first World War. Until now, the most recent book about Loewy was a 2002 reprint of his own biography that was originally published in 1951 at a time when Loewy still had another thirty-five years of life and accomplishments before him—of which cars for Studebaker, including the Starliner coupe and Avanti, are notable.

So, perhaps it is time for a new book on Loewy that does encompass his full span of years. Streamliner by John Wall is the most recent attempt to capture Loewy from the perspective of his Image-making in the Age of American Industrial Design. Although, right there in the subtitle is a miss-speak as Loewy was very much a man of the world and his design influences and clients were not merely global but extended even into outer space for it was non-other than Raymond Loewy who designed the living space for the astronauts aboard Skylab and insisted on giving them the porthole with which to view outside. Without Loewy there wouldn’t exist those wondrous photos of planet earth from outer space.

Wall’s background in journalism—albeit as a lifestyle newspaper writer/editor before transitioning to working in the media relations department of a college and a university—gave your commentator hope that, coupled with his book’s bibliography and chapter notes, it was an indication the writing might be careful and accurate and that subsequent fact-checking/verification had been rigorous. Because, of course, finding flaws and deviation from fact in one or two areas of the narrative casts doubt over the entire book leaving a reader wondering what else may not be quite correct.

That seed of doubt was planted upon discovering that Wall truly had “gotten lost in the weeds” at various places in his narrative. Notably, and sadly, in the tenth chapter which focuses on and is titled “Avanti” there are at least half a dozen statements that made Lew Schucart, the editor of the Avanti Owners Association International’s Avanti magazine, take exception. The most egregious and puzzling is where Wall wrote, “Shortly after the debut of the Avanti, on November 25, 1963, the production plant in South Bend closed its doors, laying off 6,000 workers.”

As there is no accompanying chapter note upon which Wall based these words, he is solely and totally responsible for this fantasy. Had Wall researched in the Studebaker National Museum’s holdings or read SNM Archivist Andrew Beckman’s Studebaker’s Last Dance, The Avanti he might have been saved from making some of these grievous errors. History—and a multitude of books and published road test articles from every enthusiast magazine of the time—support that Studebaker debuted the Avanti in April 1962. While Studebaker did ultimately move all production to its Canadian plant, that didn’t happen until after January 1, 1964 and as Beckman recorded, “Regular production in South Bend ceased on December 20, and Studebaker built its last Avanti on New Year’s Eve 1963 . . . Studebaker built 4,643 Avantis over its 18-month production run.”

Wall writes other flights of fantasy, but no need to belabor each one here. The caveat to the reader of this book is: do not take the easy-to-read writing on the printed pages too literally. Throughout his book Wall seems to be wrestling within himself at the idea that this man of whom he writes really was as influential as he was and lived and worked with such a joie de vivre as the French-born Raymond Loewy truly did.

Wall’s narrative in another chapter has him giving mighty short shrift to a man whose stature in the realm of design—particularly as related to automotive design—is without parallel. Strother MacMinn (whose surname Wall couldn’t manage to spell correctly in his book) was identified (correctly) as a one-time GM designer who left the corporate design world to educate future designers at Art Center College. What Wall neglected to write is that MacMinn taught design and design history for just a few months shy of a full 50 years! So not only did he influence more active, working designers than any other single human being, but his opinion and writings carry considerable weight.

MacMinn wrote in a 1987 issue of Automobile Quarterly (no AQ’s were apparently part of Wall’s research as none are listed in his bibliography or mentioned in the text) about Loewy with the understanding and insight that Wall struggles with. Here is what this accomplished designer and master design educator Strother MacMinn said about Raymond Loewy: “Loewy’s skill as an entrepreneur was matched by his ability to identify and employ the best designers in the field . . . Loewy’s flair was achieved through personal participation as well as by verbal encouragement and direction.”

There are other puzzling anomalies. Citing just one, Wall acknowledges he was aware that the Library of Congress has extensive Loewy holdings in the form of renderings, photos, correspondence, and more. But then it was unclear from either the bibliography or reading the text of his book whether he ever actually spent time at the LOC conducting research in its holdings. But in a blog posting found online dated August 2018 he wrote, “[Loewy’s] archives—particularly the Library of Congress holdings—and are heavily weighted toward his company’s work after the 1950s.” Which then gives one pause to wonder why, since Loewy’s own book leaves off in the early ‘50s, that wouldn’t be precisely the material of great interest to a researcher/writer seeking to further Loewy’s story?

Does Streamliner add new information or understanding to the body of knowledge? Probably not as the bibliography and chapter end notes bear witness. But don’t mistake or misinterpret that to mean the book is without “worth.” For Wall’s book does put Raymond Loewy, his most-advanced-yet-acceptable (MAYA) design and business philosophies—which mainly took place starting approximately 100 years ago, 1920 to 1975—all between the covers of one book and publisher Johns Hopkins University Press makes it available to new, contemporary generations of readers.