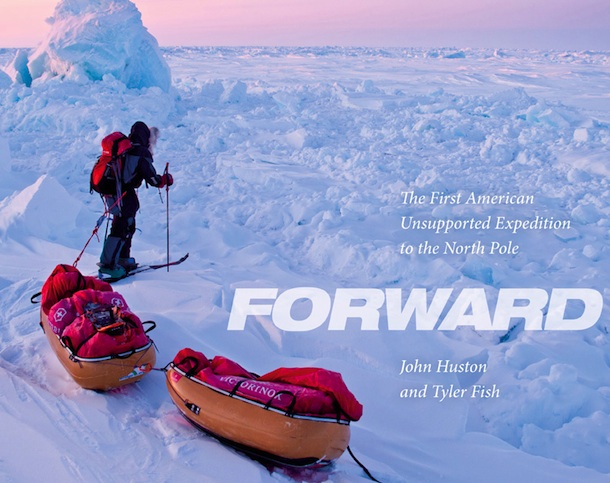 “Tyler and I trust each other implicitly, but lately our relationship has had its tensions. We’ve known each other for nine years, since our days working together at Outward Bound, the famous outdoor leadership school. Now, we are like soldiers marching through a moonscape of ice, dependent on each other for survival.”

Imagine how much metabolic activity you’d have to generate to burn that many calories. For the authors of this book this was all in a day’s work. Walking, skiing, and occasionally swimming, for two months while pulling 300-pound sleds for 500 miles takes it out of you—no matter how many sticks of butter and, always a crowd pleaser, pemmican stew you gorge on.

In 2009 John Huston and longtime colleague Tyler Fish thought they were ready to try something not accomplished by many and never attempted by an American expedition: to be put ashore at the edge of the Arctic Ocean and then travel under their own power to the North Pole without resupply. And to arrive there before the helicopter sent to extract them on a fixed date, ready or not. Since they wrote a book about it they obviously lived to tell the tale. Moreover, they did meet their goal.

Both authors are, among many other things, motivational speakers. Just think of all the pep talks they got to practice on themselves during this challenge! Huston (b. 1976) is also a student of history, particularly the great leaders. People like Norwegian explorer Roald Amundsen (who in 1911 led the first expedition to the South Pole) inspire him and so it was particularly rewarding when in 2005 a British TV outfit that sought to replicate the Amundsen/Scott race to the pole—72 days/1400 miles using only period clothing, equipment, and food—for a BBC/History Channel documentary hired him to be the “English voice” on the Norwegian team. When his team leader, Norwegian Rune Gjeldnes (“the most accomplished living polar explorer”), remarked one day that no American had made an unsupported trek to the North Pole, Huston did not think he was the man to do it either. But the idea took hold and he explored it with his mentor, Fish (b. 1973). As experienced wilderness guides and having acted as safety & logistics consultants to other expeditions they were able to appropriately prepare themselves, from physical skill to correct gear to finances. 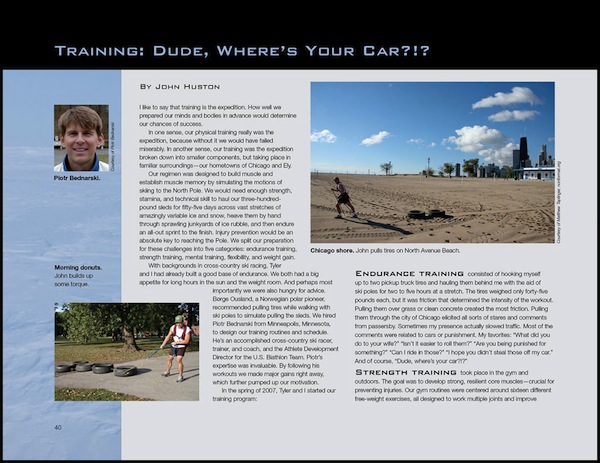 As every extreme athlete will concur, beyond a certain point mental preparedness is a more critical factor than physical and intellectual skill. To be able to act unthinkingly on fully internalized values will, in a time of crises, supersede learned skill. As people who are in the “motivation” business, Huston and Fish understand this better than most and so one of their first steps, right at the start of their preparation regimen in 2006, was to articulate a mission statement and “a solid set of values”: optimism, humility, responsibility. The eyes of readers who have suffered through the shallow pontifications of self-appointed business or life coaches will now glaze over . . . but Huston and Fish attribute their survival to this very step! And everything in this book proves them right.

The book opens on day 47—and a life-threatening accident after a morning of arguments. Right away, in only the first few pages, the line between artifice and truth is drawn, and crossed. The book is thus much, much more than a mere travelogue or learned commentary on the history of Arctic exploration. It is that too, to be sure, and also, interspersed with the daily log, dispenses reams of practical advice—food, calorie math, how to choose gear, costs and logistics, clothing, sea ice behavior, how the human body deals with cold etc. 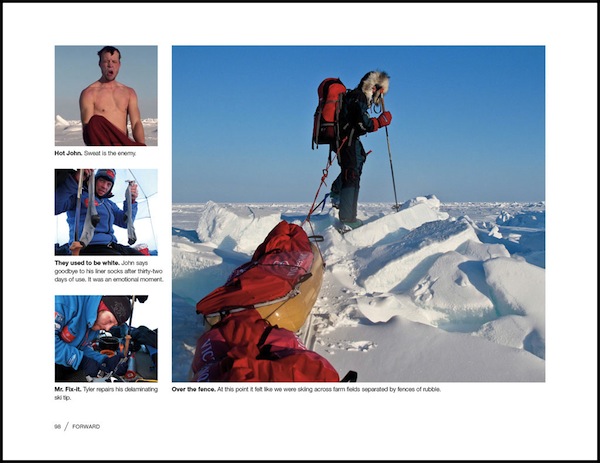 After so dramatically introducing the protagonists, the book explains who they are and why they do what they do. They “really don’t like this question” but accept that it is inevitable. Some will get it, some won’t and that too is inevitable.

The hasty reader might be inclined to say that he book “skips around” a lot in terms of story arc and specifically the placement of the 18 special features called “Expedition Insights” that “interrupt” the main narrative. But, given the attention to what Huston and Fish say, how they do it is surely no accident.

The landscape format book, which took 18 months to complete, is very well written and most excellently photographed, both in terms of photographic skill and emotive impact. (Even the aforementioned accident is photographed which is a pretty extreme example of the ability to compartmentalize.) It is also very nicely designed, typeset and proofread, and deservedly won the IBPA (Independent Book Publishers Association) 2012 Benjamin Franklin Award.

Appended is a daily expedition log in tabular form (coordinates, distance, temperature, wind speed, notes), an equipment list down to the last gram, a food plan, and notes on sea ice dynamics. All this meticulous detail may well give the reader the impression that such an undertaking is eminently doable but it should really come with a big “Don’t try this at home, kids!” warning label! If you want to learn about character development and self-discovery through active learning expeditions, contact the authors through their website.

And the next time a motivational speaker presumes to tell you how to live your life, ask him to put up or shut up!

Posted Under: Other Genres, Travel | Author: Sabu Advani | No comments yet