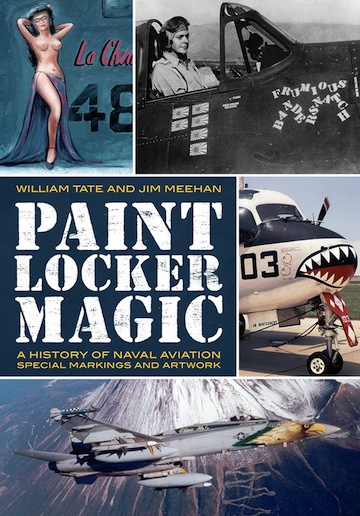 “. . . It was thought at the time that the public might be offended by the use of off-color slogans and artwork as found on Air Corps aircraft. Also, we must not forget the sensitivity that the mothers, wives, and girlfriends of the sailors might have had toward the genera of pin-up art that adorned many of the WW II USAAC aircraft.

To understand the reason behind the scarcity of naval aircraft nose art, we must first look at the unique nature of the service.”

Unless you are around military aircraft a lot you may have never noticed that naval aircraft seem to have fewer decorations than those of other services—and not just recently. Why? US naval aviation has been around for over 100 years so this can’t be coincidence.

Both authors have been around aircraft for a long time and apparently pondered this very question for a long time. Tate, for instance, who joined the Navy straight out of high school in the 1960s says he’s been gathering material for this book for 20 years. As a graduate of the Aviation Electronics School he had many overseas deployments and not only started photographing aircraft all over the place but also recorded the sort of data that now enables him to offer fantastically detailed captions. At some point he also studied art and painted nose art himself on National Guard Phantoms. Meehan comes at the topic from the aircraft repair/maintenance side and also as a historian (American Aviation Historical Society and a bunch of aviation museums and societies). 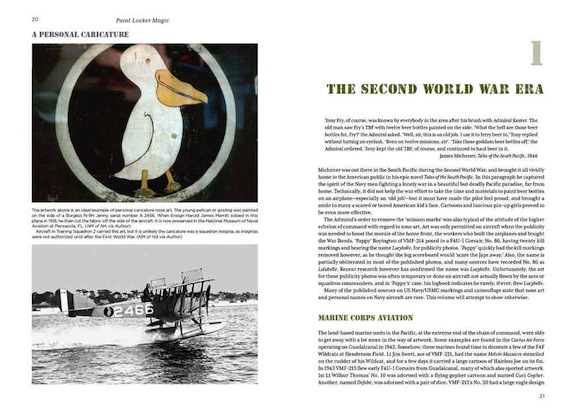 The answers they suggest are not at all obvious (cf. different command structure on sea vs. land, an environment [esp. on carriers] conducive to damage, aircraft-sharing among crews, effect on morale of theater of operation), certainly not to the newbie, and at some level even surprised them. These reasons and others are enumerated in a fine Introduction and revisited throughout the pictorial part book that makes up the bulk of its first two thirds. 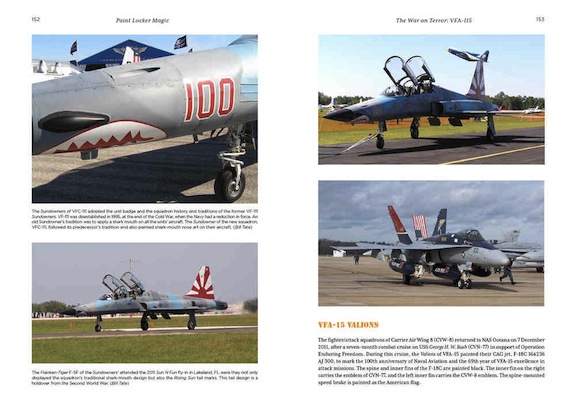 Drawing parallels to the naval tradition of figurehead carvings (an angle that does little to explain the origins of nose art in other services) the authors embark upon a taxonomy of nose art: pin-ups, cartoons, and commemorative art (from kill marks to a remembrance of NYFD personnel lost in the aftermath of 9/11). 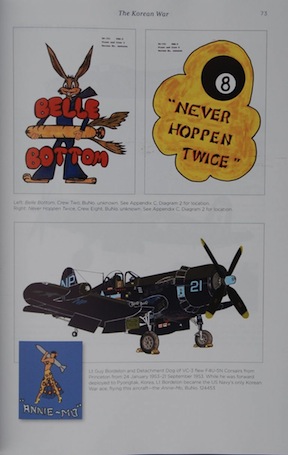 Aircraft of all types are discussed (including blimps, rotorcraft etc.) and presented by era, from 1941 to the present. Depending on context the contents is further divided by squadron/group or specific aircraft. Illustrations abound but are, understandably, given the wide variety of source material, of uneven quality.

If all that isn’t interesting enough, the Appendices that make up the remaining third are surprising in that they make clear the authors didn’t do their book just for grins and giggles. Fifty pages in miniscule type list in tabular form artwork by aircraft type, name, squadron, modex (part of something called the Aircraft Visual Identification System), and Bureau Number. The data is then reshuffled and printed as “Nose Art Alphabetically by Name.” Several pages of color profiles then illustrate where on an aircraft art is normally applied. Separate section, replete with lists as the foregoing, then examine “The Mark of the Beast”—sharks, tigers, cats etc. usually with teeth-festooned jaws agape, and Emergency Rescue Squadrons. A final section introduces the FlyGirls that have painted over 50 active duty aircraft—and even a ship—since 1999 on a volunteer basis. 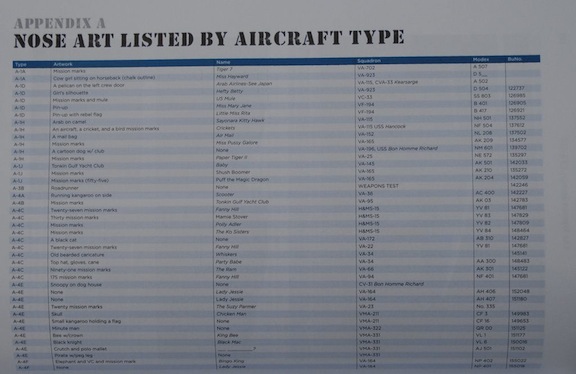 There are lots of books about nose art—this one takes a completely unexpected tack.

Men of the Battle of Britain »
« And the Revs Keep On Rising: Great Drives in Fast Cars