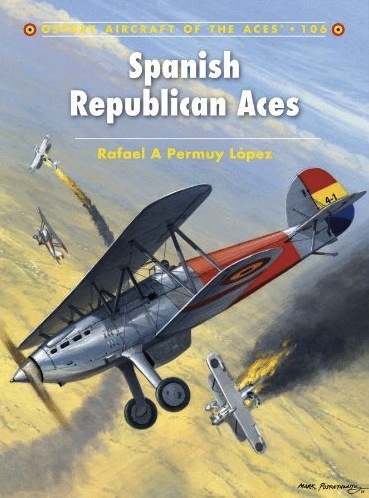 by Rafael A. Permuy López

Hemingway’s For Whom the Bell Tolls takes place all on the ground but at the same time—the Spanish Civil War—as this book. By the time he wrote it, three years after covering the war for the North American Newspaper Alliance, the moniker “the good fight” had become firmly attached to it. Next time you read the novel, give a thought to the Spanish aviators—and thank the author of this newest Osprey book for straightening out their history.

While peripheral to this book, it should be realized that proper historiography was for years impossible inside Spain, and even for decades after Franco’s death the dictum “to move forward and forget” thwarted any revival of the sort of interest we find in today’s Spain. As a Spanish Army Artillery Corps reservist with the rank of major, an MA in Social Communication, and deputy director of a military history magazine Permuy brings an eminently suitable skill set to bear on his treatment of the subject. He has approached it on different levels of magnification and in several books, from sweeping overview of aerial warfare to monographs on specific aircraft. Few authors find it easy to switch between micro and macro vision; in this case matters are surely helped by the fact that Spain has a small, finite geographical area and numerical force. 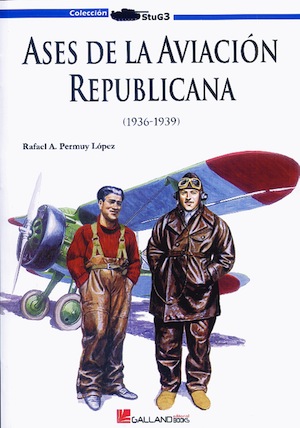 This book is the English version of his 2008 title Ases de la Aviación Republicana 1936–1939 (ISBN 9788493651770). That book was slightly smaller, shorter, with fewer photos and only four drawings. Add to that the excellent translation and the English version is a hit.

Permuy rightly points out that the vast majority of existing personnel data must be regarded as suspect because what little records were kept are “unofficial and often contradictory.” Moreover, Spanish custom was to credit squadrons/groups with kills, not individual pilots. At any rate, record-keeping was more a matter of the recording officer’s mood than strict protocol. The author explains what sources were available to him, what choices he had to make, and that, in the end, his selection is to some measure arbitrary, for which he begs the reader’s indulgence.

While most titles in this Osprey series look at more than just the aircraft and their ace pilots, it is especially so in this book and you’ll pick up a good deal of Spanish political, military, regional, and even social history. In every other regard—photos, captions, credit etc.—the book follows the tried and true format

After a brief summary of military organization, command structure and operational readiness, the inquiry shifts to individual regional theaters of operation which are described in detail in terms of pilots, commanders, and engagements. While hardly new it’ll probably still surprise readers to learn of the role Russian pilots played. In comparison to other Osprey titles there is relatively little in terms of aircraft specs and technical talk. 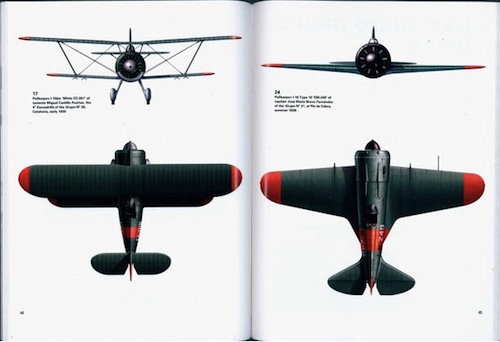 Special mention must be made of illustrator Julio López Caeiro who provided 10 pages of color profiles of nine fighters (details for each are in the Appendix), including two top and front views. He is a professional illustrator with a wide variety of military and transportation subjects to his credit. His work in this book is fantastically detailed. This is immediately evident when you compare his drawings of the Polikarpovs I-15 and I-16 to those in Osprey title #95 (Polikarpov I-15, I-16 and I-152 Aces) by a Russian illustrator whose work looks positively flat and has far less technical detail.

The cover art is once more by Mark Postlethwaite, a busy scene based on an action report. Appended are an annotated summary of aces/kills, divided into “confirmed” and “claimed.” Bibliography (all 12 titles listed are in Spanish; also lists archives consulted); Index.

by Rafael A. Permuy López

In the Name Glory: 1976, The Greatest Ever Sporting Duel »
« The Flying Wings of Jack Northrop, A Photo Chronicle