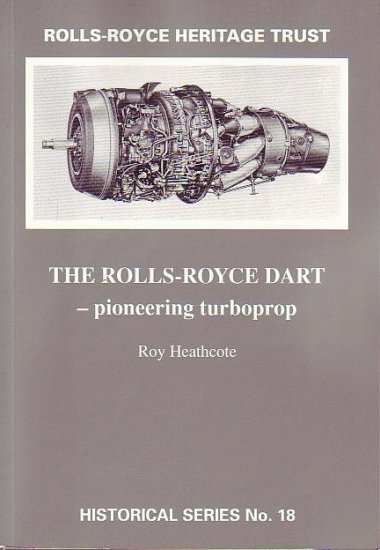 This little book is a veritable potted history of one of the longest-serving turbine engines around. It is a written version of a lecture first given in 1987 by the author who was intimately involved in the early days of the engine’s development and had a more distant involvement with it in its later years.

In the Introduction he points out that this account does not attempt to be an in-depth study but an outline of the history of the engine, and this is indeed what it is. One of the strengths of the lecture format is the extensive use of illustrations, in this case original drawings and diagrams from Rolls-Royce and fascinating photographs, particularly of the early flight test era.

The book begins with a couple of background chapters that give an interesting insight into life at Rolls-Royce in the immediate postwar era and the way in which the early gas turbine engines were designed and developed. From what is written, the Dart design and development team must have operated in the manner of a Skunk Works. Clearly Lionel Howarth was a very talented and inspirational Chief Engineer. The book shows that in this era, engines were very much the products of individuals and small teams.

The main text and one of the Appendices lists the main team members and the list includes many names who will be familiar to those within the aero-engine industry and Rolls-Royce in particular, as they have gone on to greater things in later years.

The team benefited greatly from work already done on earlier turboprops during the development of the very ambitious Clyde and the original Trent, which was little more than a Derwent with a gearbox. This experience was particularly valuable in the design of the gearbox and control system. The engine went through pretty traumatic initial running, with the performance on the test bed being a long way from what was required, and the weight well above its target. However, the book shows that, thanks to the application of good engineering principles, the problems were identified and solutions found, significantly improving the performance and weight. The book gives a fascinating insight into the approaches the team took to find solutions. However, as is still often the case, as the engine began to mature the requirements changed and more power was needed, resulting in a redesign and resize.

The early days of the Dart are closely linked to the evolution of the Vickers Viscount airliner and this is well covered in the book with the increasing capability of new versions of the aircraft being matched by the demand for more power from the engine.

The ultimately wide range of applications of the Dart in both civil and military fields is well illustrated in the book. Some of these, like the Fokker F-27 and Avro 748, were very successful commercially whilst others, like the Aviation Traders Accountant, were consigned to the history books for one reason or another. Appendix 2 notes that the one-off applications included a B-17 fire bomber and a version of the Mustang fighter, which can be seen at the USAF Museum in Dayton, OH. The breadth of applications led to the engine ultimately developing more than three times its original goal of 1,000 shp.

Later chapters deal with the technical features of the engine in more detail, with individual chapters covering the gearbox, compressor, and turbine sections. Each of these is well illustrated with original drawings and diagrams, and the text describes the evolution of many details of the design. It is here that the written lecture format shows its weakness. The text refers to features on the drawings but it is not clear to the reader what they are, as the terms used do not correspond with the labels on the drawings. It is easy to imagine Heathcote pointing them out to his audience at the lecture with great enthusiasm, but in the book the impact is lost. There are also several terms used in the text that won’t be familiar to the average reader, or indeed to this reader who had some involvement with the engine in its final incarnation, resulting in the significance of some points being lost.

Included in the Appendices is a table listing each mark of engine, its basic details and applications, and a chart summarizing the evolution of the engine capability.

Overall, this is a fascinating little book (No. 18 in the Rolls-Royce Heritage Trust’s Historical Series) that would be of interest to anyone wanting to understand more about the early days of aero gas turbines and the history of one of the most enduring first-generation products.

Martin is a Performance Consultant for Rolls-Royce; this review was originally written for the Aircraft Engine Historical Society (AEHS).

Posted Under: Aviation | Author: Other | No comments yet