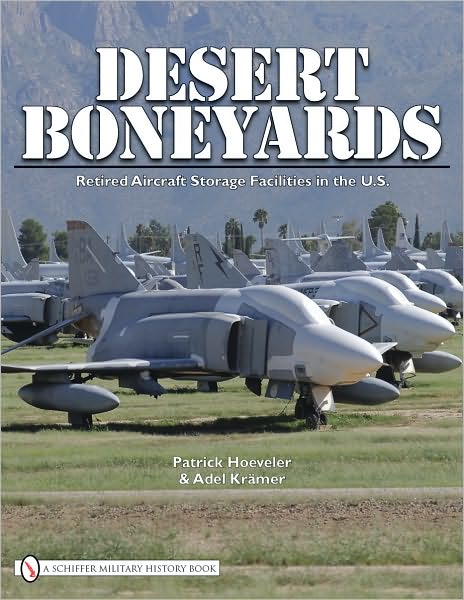 This book is about aircraft that have reached the end of their service life. When they were new and fresh and shiny they cost millions of dollars so you can’t just melt them down or dump them in the ocean to seed corral reefs. Instead you unbolt the useful bits and reuse them, or you mothball the entire apparatus in case you find a future use for it. Or you prod and poke the once vital parts to learn about their strengths and, more importantly, weaknesses. These things and more are what takes place at aircraft storage, salvage, and reclamation companies.

If you think about it, even a small aircraft is pretty large. If you have a couple of hundred of them you don’t just park them behind the house. While this book gives a good idea of what goes on at these facilities, it simply cannot adequately convey the staggering expanse of such spaces. One of the installations discussed here, AMARG in Arizona, at the height of its activity housed over 6000 aircraft! The book does offer a few aerial shots but they rarely show more than two dozen aircraft—impressive enough but nothing compared to flying over hundreds, thousands of them, mile after mile after mile.

If an old dented hubcap has esthetic appeal to you, you’ll get this book. Actually, if you have an affinity for aircraft and metalwork and design and technology, you’ll get this book. It shows you things you don’t normally get to see, not just in terms of now sometimes quite rare aircraft but also how various components connect to each other. Few of the installations discussed here offer tours and even those are guided and by bus/tram, not permitting free roaming unless you have official business there. One of the Appendices lists addresses and relevant particulars.

First published in German (Endstation Wüstenfriedhof, 2009) the book is written with great enthusiasm. Although translated by someone with a properly English-sounding name, many of the German turns of phrase have been translated verbatim, which gives the book a sometimes peculiar but colorful tone and there are some typos of the sort one is inclined to forgive “foreigners”: AMARG, for instance, is located in Tucson, not Tuscon (every page of an entire chapter is emblazoned with this typo although it is correctly spelled most everywhere else in the book).

A half dozen of the better-known facilities, both military and civilian, are documented. All are located in the Southwestern US and, oddly, the book identifies the “dust-free” environment as a reason for this. Having lived in Tucson, I know that all-permeating dust is about the only thing you can count on in the desert! The book begins with a quick summary of the reasons behind their existence, their different uses and capabilities, and gives a basic impression of inventory management and preservation techniques. The latter aspects are most applicable to AMARG (for which another of the Appendices lists inventory by type and quantity as of 2008, the year the book was written).

Of the several books on this subject, this one has the most expansive photographic coverage. None of the photos are attributed and a handful seem to be from sources other than the authors. Many photos are full-page if not larger, all but a few in color. Captions are admirably precise as to the aircraft shown.

All in all, a nice book with a clear purpose which it fulfills just fine. Seeing aircraft in various states of disassembly may be somewhat of a niche interest but to the thinking person, or the imaginative one, this stage of the life cycle is as much part of the big picture as any other.