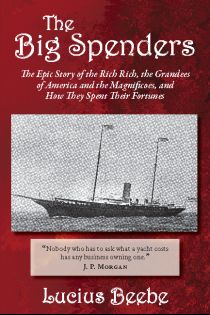 The Epic Story of the Rich Rich, the Grandees of America and the Magnificoes, and How They Spent Their Fortunes

Automobile folks couldn’t possibly be ignorant of the Pebble Beach Concours d’Elegance, first held in 1950. In its early days, one name that was inseparable from the event was that of bon vivant and concours judge since 1954 Lucius Morris Beebe (b. 1902). To such extent was he seen as emblematic of all that Pebble Beach was about then that upon his death in 1966 a trophy was established in his name. In 1959 he summed up the concours as “an event whose social implications are second only to those of the San Francisco Opera.”

“All I want is the best of everything”

While Beebe (“Mr. New York”) was living the high life—in 1939 he found himself on the cover of Life magazine—the world around him was rebuilding itself after the ravages of the Great Depression. The erstwhile newspaper editor and author traveled in his own railroad car, lived large in every way, and cherished his reputation for making bombastic and pithy pronouncements.

This subtitle of this book, his last and thought by many his best, says it all:The Epic Story of the Rich Rich, the Grandees of America and the Magnificoes, and How They Spent Their Fortunes. In it he paints a colorful picture of vast excesses and eccentricities that would nowadays be either impossible to pull off or at least be derided as unacceptably insensitive and very politically incorrect. Money was made and spent differently in those days, as was the mindset of what Beebe calls the rich rich. The reader is reminded of the different value of money at that time. One million dollars may not sound much like today but when Spencer Penrose (b. 1865)—“the most conspicuous of a long and gorgeous tally of Colorado’s swashbuckling grandees”—left a bedside memo reminding himself not to spend more than $1 million the next day, you could buy a small country for that sort of dough. (Still, small fry for him: upon is death he bequeathed more than $125 million.)

A Big Spender himself, Beebe looks upon these foibles with fond amusement rather than scorn—no social critique this—and presents the subjects of his treatise as worthy representatives “of the lost art of being rich.” Such sentiments, especially when clothed in often long-winded and puffed up prose require a reader’s willing suspension of criticism and impatience. For better or worse, the things he writes about—no matter in how exaggerated a fashion—did happen and they are entertaining. Naturally luxury playthings like cars and yachts play a prominent role, especially in the chapter “How to Move More Stylishly”.

You’ll probably be surprised to hear that the Index is 14 pages long and consists of only proper names. Just goes to show that there were a lot of people Beebe could poke fun at. (Car people may want to create their own index as they read. You will want to find these gems again later!) There’s even a three-page Bibliography; photos are bundled into a center section.