Lockheed Blackbird: Beyond the Secret Missions 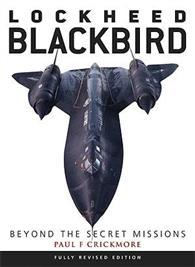 In automotive terms the Blackbird is a veritable hot rod, doubling, almost trebling the altitude and flight envelopes of the best fighters of its day, such as the F-100 Super Sabre and F-101 Voodoo. To achieve such lofty performance most of its systems and materials had to be invented or created from scratch, such as the first-ever large-scale use of titanium (advanced composites didn’t exist yet) or its aluminum-impregnated tires or a brand-new type of fuel.

All of Crickmore’s several Blackbird books have met with high acclaim, not least from the Habus themselves (the nickname for the crews that flew operational sorties and also for the plane itself)—and they should know better than anyone what’s what.

Before taking his first photos of an RAF Mildenhall-based Blackbird, in 1981, from the back of an air tanker, Crickmore only knew it as a sporadic phenomenon blipping across his radar screen while working at the London Air Traffic Control Centre. Since the super-secret Blackbird missions were flown in near-total radio silence, the ATCs and the pilots were among the few who knew a plane’s whereabouts. Moreover, Blackbirds had totally unique descent requirements and a good ATC was critical for keeping the traffic pattern clear. No wonder Crickmore became intrigued. Those first photos, taken strictly for himself, were eventually published in a magazine which led to one book commission then another and another. Over the years, he says, his friends in the Blackbird community have given him “unprecedented access” to material for his books.

Judging by the author’s topic selection and organization it appears that he does not have the novice reader on his radar but rather presumes a certain familiarity with the subject. And it makes only sense that a successive cycle of books should become more and more specialized. For example, after an Introduction that establishes basic context—Cold War, U-2, U.S. President Eisenhower’s “Open Skies” initiative, Skunk Works etc.—the discussion of the A-12 takes us within only a few pages to such detail issues as aircraft sensors, Area 51 development, and navigation aids. This sort of pace may be a bit much for the reader who knows only a little of the Blackbirds. The advanced reader on the other hand will appreciate the fine discussion of the air induction system (and we’re still only on p. 47!) and its challenges to the then single pilot who had to cope with an extremely high workload constantly manipulating the inlet spike and bypass door positions in order to optimize fuel/engine use and temps. This level of magnification is indicative of the rest of the book and is what sets Crickmore’s apart.

A few remarks about crew training and early flight testing take us to the heart of the book: the commencement of operational sorties and the progression from Oxcart to Kedlock to Tagboard/Senior Bowl to Senior Crown programs. Based on declassified government records and interviews with many of the principals (some on the condition of anonymity) the book describes global missions from Vietnam to the Middle East along with the various locations out of which they were flown worldwide.

The pace remains brisk throughout; the writing is fluid; what data there is pertains to performance not aeronautics or engineering. The text is interspersed with quotes, suitably illustrated, and augmented with supporting material such as maps and lists. The photo selection is, in fact, remarkable for [a] finding just the right photo to work with the text and [b] showing new images such as CIA photos or Crickmore’s own. There’s a nice set of M-21/D-21 photos and an uncommonly large number of crew photos. The color photos are bundled into three separate sections. All photos identify the plane and the photo source.

Other highlights are an entire chapter dealing with the YF-12 and a detailed technical description of SR-71 components. A closing chapter looks at de-, re-, and final deactivation. For the detail hound, the gems are always in the Appendices and here we find: various detachments’ mission records; first check flights by plane/pilot; the current whereabouts of A-12, YF-12A and SR-71 airframes; commanders, awards, crews; chronology of significant events; records; aircraft losses; NASA flight details; and—drum roll—a list of SR-71 intercepts by a MIG-31 and reproduction of a log book page of the Russian pilot who was interviewed earlier in the book. A separate section contains technical and cutaway drawings including the entire plane as well as front and rear cockpit diagrams, both fully annotated. Bibliography (unclear if this is for further reading or of books consulted; in either case, Crickmore omits his own books. A case of politeness winning over practicality.); good Index.

Considering the low price there’s absolutely no excuse for not owning this book!

Flying the SR-71 Blackbird: In the Cockpit on a Secret Operational Mission »
« The Bahamas Speed Weeks