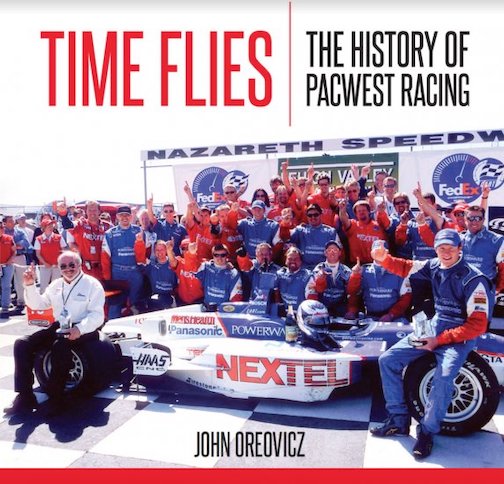 “Who the hell is John Oreovicz?”

Easy, easy . . . this is how the man introduces himself on his website/blog. And being a professional wordsmith he surely calibrated these words just so to paint a picture.

He goes on to say, “I have strong views about racing, rock and roll music, and simple comfort foot, and I’m not afraid to share them.” It is always good to deal with a writer who even knows enough to have a point of view, especially if that POV is not in conflict with observable fact. That it should be him to share the PacWest story is only good and proper because he was the team’s PR manager 1996–98 and thus personally knows the key figures, plus he has a fully fleshed out understanding of the sport—which is where the POV and not being afraid to share it come into play: think Indy Car, think IRL, think CART, and duck for cover. Few things in American motorsports were as contentious as that internecine warfare. PacWest owner Bruce McCaw flew the flag, with conviction, on the CART side and, later on, would become a functionary first on its Franchise Board and then as a Board Member.

Bottom right: “Guys—let’s not do this again. B.” Stern words from the boss.

If all that people today remember about PacWest is that the team was instrumental in launching Scott Dixon’s Indy car career, they definitely need the refresher course Oreovicz is presenting here. Considering the level of respect that peers have for McCaw’s leadership and the team’s role as an incubator for so many storied motorsports careers makes it all the more frustrating to accept that a team that held its own against the big dogs like Team Penske, Chip Ganassi Racing, and Newman/Haas Racing was “sidelined before it could really make its mark” due to “a combination of misplaced loyalty, industry politics and a failing economy.”

Readers who do already know something about PacWest history will realize that it is divided into two principal eras, the McCaw years from late 1993 to 2001 and the PK Racing (after new owners Craig Pollock and Kevin Kalkhoven) and later KV Racing Technology years 2003–16. The book focuses on the former and, in fact, had been intended to come out in time for the 15th anniversary of PacWest’s CART debut as a two-car operation in 2009 but was delayed for various reasons until 2020. 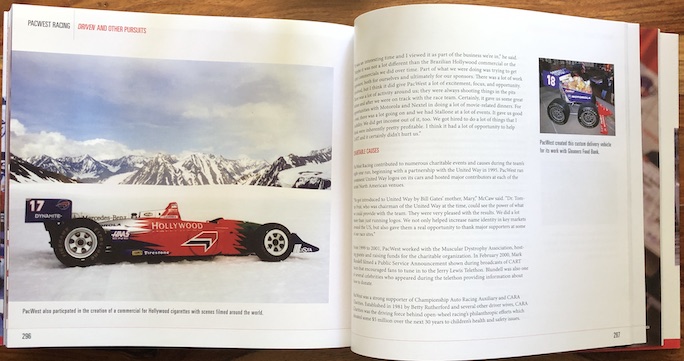 An open-wheel race car on a mountain top? Only in a Hollywood commercial; Hollywood Cigarettes that is.

The book is thorough in connecting dots, beginning with the formative influences on young McCaw in regards to things that move under power, cars and aircraft. Pause for a moment to recall that this is the family behind early cell phone giant McCaw Cellular to appreciate that there is plenty of business savvy to go around—and, since that company was sold to AT&T just before PacWest Racing was launched, at least some seed money. Anyone who reads this book from the perspective of a budding race team owner would be anxious to snatch a look behind the curtain on this matter but the book remains largely mum, probably because McCaw who took a very hands-on role in this book, would have considered it crass. Still, money makes the world go round, and in the end, it was the loss of sponsorship from Mercedes and Motorola that did PacWest and its subsidiaries in. 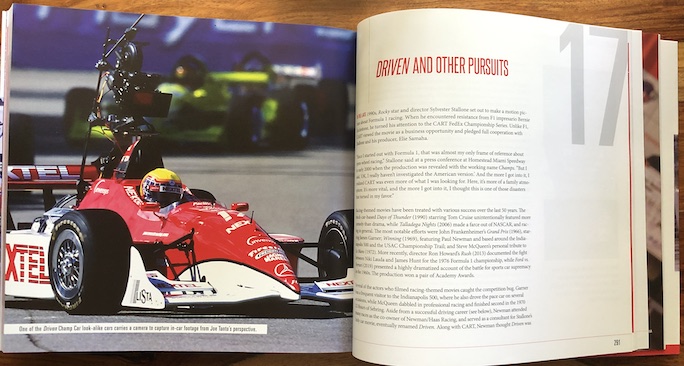 The latest thing in telemetry? Nope, camera gear for shooting the movie Driven. There are actually two with that same name but here we’re talking about the 2001 version that Sly Stallone wrote and produced, and played the lead.

Merely looking at the Table of Contents is to get a soup to nuts, cradle to grave sense for PacWest’s rise and fall: cf. ch 2 “Growing Pains”—ch 4 “Too Much, Too Fast”—ch 9 “Still Coming Up Short”. Right from the start you feel Oreovicz has a firm grasp on how best to encircle the subject. Even minor matters such as the forays into Touring Cars and NASCAR Trucks are considered. Appended are a Team Roster and a Table of Season Statistics for 1994–2001 in which the PacWest positions are in boldface for a quick grasp of the big picture. There is a fine Index—and not a typo in sight. 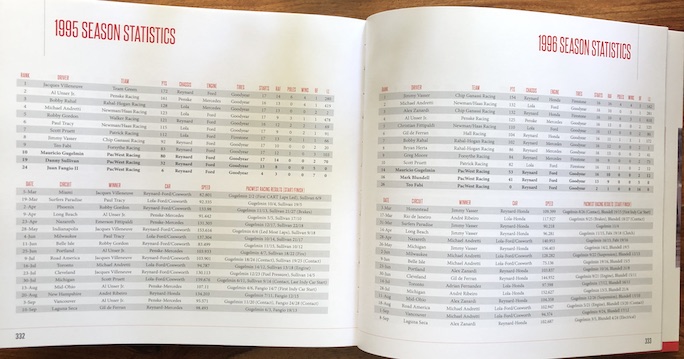 You’ve heard it before: Time flies when you’re having fun. This book is fun, but more importantly a really solid review of Indy Car racing at its peak.