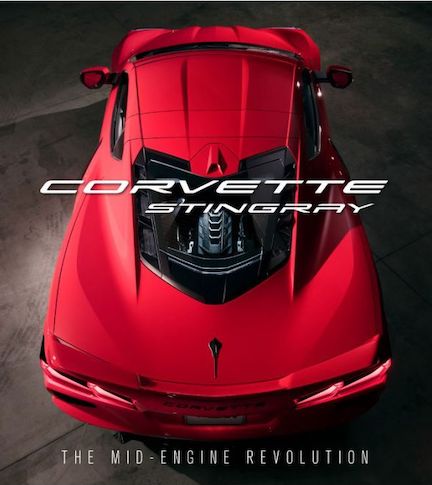 The promotional material for this book, as well as its dust jacket, claims Corvette Stingray, The Mid-Engine Revolution “chronicles the full development story” of the new 2020 C8. Yet the book spends fully half of its 209 pages rehashing Corvette history since its 1953 introduction and especially noting Zora Arkus-Duntov’s decades-long personal attempt to try to convince Chevrolet to build the car as a mid-engine, mainly to enhance its racing performance. GM and Chevrolet’s answer was always some form of “it costs too much,” “why change what’s already selling well?” or simply “no, not now.” The book never puts an exact date to when attitudes changed nor does it state a year development work actually began on a possible mid-engined ‘Vette. Suffice to say it was easily 20 years after Duntov’s April 1996 passing. 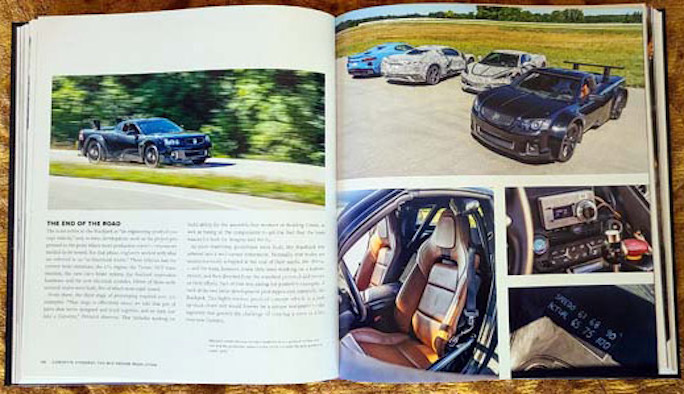 By page 107 it starts reading as though it is a dealer showroom brochure with “The car delivers . . . The base package design of the vehicle obviously is driven by the engine location and the occupants, but also by the level of practicality, with storage space, practical storage space, both behind the engine and in front of the occupants. And it has much more premium material usage and design context than the previous Corvettes. So, in this new layout, we’ve effectively got more dynamic performance, a brilliant new profile to the vehicle, and we have more interior space than the old vehicle, and we have more trunk space. And it accelerates faster.” And it goes on to refer to visual cues that “make it still a Corvette”—all marketing material stuff.

Ten pages later the reader is again presented with history . . . the same history, only scantily rephrased, that had been written in the first half of the book. At last, in the latter third of the book in a chapter titled “Nuts and Bolts” does it really start addressing any C8 specifics.

It begins by acknowledging that the foundation of a car—any car—is its platform and then goes on to say that this new C8 is built upon the same platform Corvettes have used since 1997 with but few alterations and those being ones to redirect crash energy from the side rails to the central tunnel. The powerplant is a tweaked version of the LT1 with any revamps necessitated by engine relocation. Still Chevrolet felt safe in designating it an LT2 despite all that is shared by LT1 and LT2. Oh, but wait! C7’s LT1 crankshaft won’t work in the C8’s LT2 for they are that different.

The book then concludes with short bios of five people; executive chief engineer Tadge Juechter, marketing manager Harlan Charles, chief engineer Ed Piatek, program engineering manager Josh Holder, and program manager Kelly Bellore. And that only makes another shortcoming all the more obvious for on the facing page is a photo of a group of 45 who comprise some of C8’s development team. But there is no caption anywhere naming or identifying any by name or function. 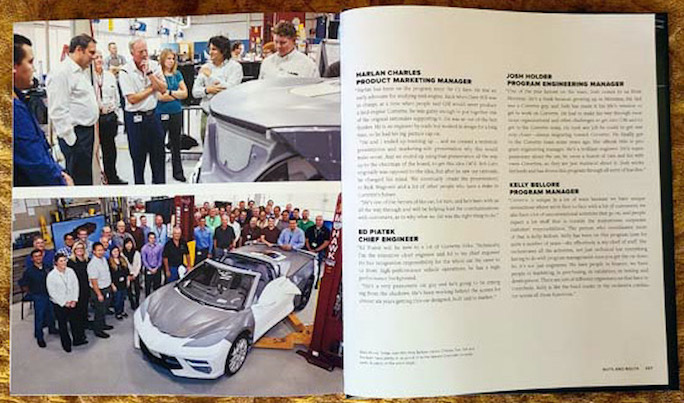 This is an unusual book. It has no named author(s), nor are there any photo credits anywhere. It is described as being “officially licensed by GM” yet goes to great length on the masthead page to disavow “any inaccuracies or omissions” and render “GM and any licensing representatives” free of any responsibility. 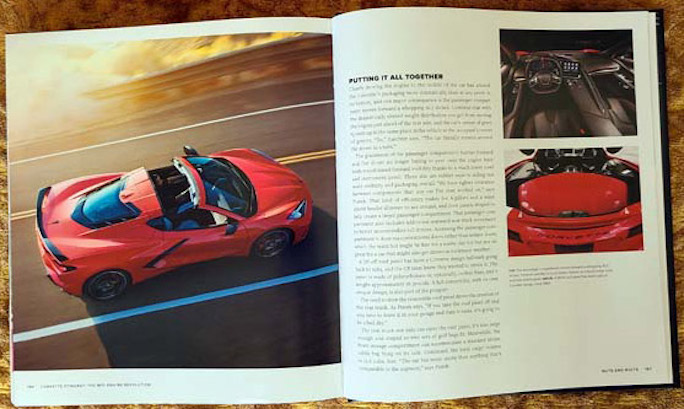 The book is obviously an attempt to celebrate and enjoy the new C8. The publisher, Quarto’s Motorbooks imprint, has produced a very handsome volume with an abundance of fine images on a paper stock that feels good to the touch. So, although it left this reader/commentator longing for more engineering and design details, it nonetheless is likely still to attract those fascinated by all things Corvette.