Atlantic Automobilism: Emergence and Persistence of the Car, 1895–1940 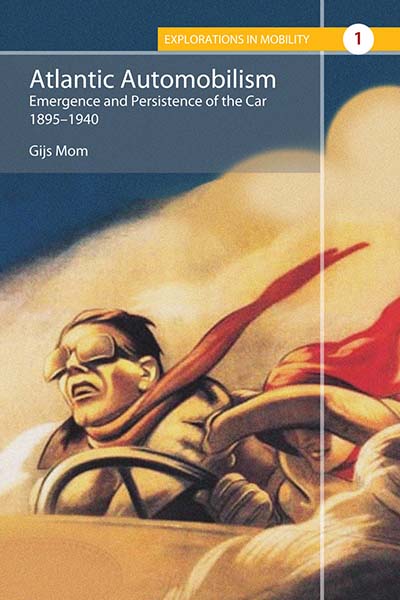 The author, a professor at the Eindhoven University of Technology in the orthetherlands, opens by stating that “this is the work of a lifetime.” Thus, I wish to give it considerable respect. Certainly it is one of the most important books dealing with automobile history to be published within the past twenty years. However, it is not without limitations and flaws. For an academic scholar working in the field it is a “must read,” but I have to qualify what is meant by “read.” Going through this book requires patience and rumination. My own feeling is that reading it was a battle—and I have reviewed more than 60 books during my 30-year career. It is not a genre of automobile history that one takes to the beach or on an airplane.

My respect for Mom came easily, since his monograph totals 752 pages, including a bibliography of some 76 pages! The cofounder of the International Association for the History of Transport, Traffic and Mobility (T2M), Mom’s monograph is the first in an envisioned series entitled “Explorations in Mobility,” and it sets a high bar of scholarship for what undoubtedly will follow.

Mom particularly wants to answer the question of “Why? Why the car (and not, say, the bicycle)? Why in the North-Atlantic realm, and not elsewhere initially?” During the course of seven intense and lengthy chapters that are further divided into two parts (1895–1918 and 1918–1940) Mom goes deep into motives as to why the internal combustion engine car has come to dominate our lives. These include masculinity and adventure; tourism; male violence and aggression; pleasure and consumption; encapsulation in closed vehicles and the cyborg relationship between driver and machine; thrills and risks; gender and family structures; tinkering and maintenance; and finally competing technological systems involving the flexible motor vehicle and rail. Mom’s work is fundamentally a cultural history, drawing on both non-fiction and fiction. Yet more than that, it represents one slice of a total history, with a subsequent history of motor vehicle technology slated to appear later this year.

While the author’s drive toward completeness is the book’s strength, it is also a weakness. Rather than sharpen the narrative by making selections of evidence that historians must inevitably do, so much material (virtually a mountain!) is presented that the reader is overwhelmed with detail. True, all of this detail supports the idea that Americans and Europeans were exposed to a wealth of cultural influences that helped shape attitudes and decisions concerning the automobile as both a pleasure vehicle and a necessity. But perhaps by limiting information, a more effective set of arguments could be made that as a result would engage general readers and undergraduate students. This is a book written by a scholar for scholars, and thus readership will be limited. And by taking on so much material, errors are more likely to creep in. For example, on page 474 the author speaks of Remarque and his novel Three Comrades, claiming it was set in the early 1930s. That is not so, for the novel was set in the immediate post-WWI years in Germany, a time characterized by economic and social dislocations and street violence. From time to time other statements did not seem quite right, but in a work this expansive I do not want to quibble. Let others do that if they wish.

Rather, I want to focus on what was most enjoyable during my read. Certainly Chapter 3 on World War I and the use of motor vehicles by the allies as compared to the reliance on rail by the Germans proved most enlightening, and timely given centennial interest in this major historic watershed. And Mom’s historiographical account in his introduction is outstanding, ambitious, and assertive.

In sum, this is a study that will continue to be of value for decades. By incorporating a vast variety of German, French, British, American and Dutch sources, the author has pioneered a mode of cultural analysis that spans traditional national histories of the automobile. Mom’s effort augurs well for the future of mobility studies.

This review appears courtesy of the SAH in whose Journal 276 (September/October 2015) it was first printed.

Atlantic Automobilism: Emergence and Persistence of the Car, 1895–1940
by Gijs Mom
Berghahn Books, 2014