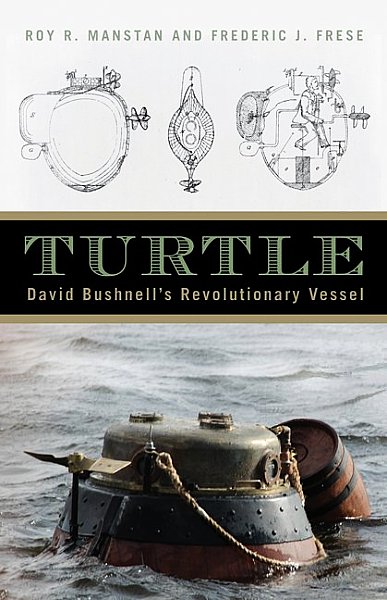 “The pragmatic Bushnell knew that his ideas would not win the war, but he was convinced that his concept of undersea warfare could influence its progress and outcome. . . . The man’s true genius was in his ability to understand all the complex elements that had to be accounted for in designing, building, and operating a vessel that had little precedent.”

Bushnell’s machine was figuratively revolutionary in that it is the first recorded submersible to have a specific combat application and literally in that it was used during the American Revolution in what the book cleverly refers to as “an experiment in asymmetric warfare” in which a tiny American one-man craft would sneak up on a big wooden British warship, drill a hole into its hull, attach a mine, and retreat before the timer went off. With apologies to Acme, Wiley Coyote at his best! Unlike Wiley Coyote, the Turtle managed not to blow itself up but it didn’t sink its target either—because the pilot was unable to drill that hole. Over the next few weeks two other pilots made two separate attempts to sink enemy ships, also without success, but for different reasons. Even so, George Washington, rightly known as someone able to grasp the big picture, pronounced Bushnell’s concept “an effort of genius.”

Messrs. Manstan and Frese could be lawyers, judging by how rigorously they analyze the—scant—contemporary evidence and the reams of speculation that have attached themselves to this story over the 230 years since. Their interest is not merely academic but also pragmatic: they didn’t want to drown! Separately and together they have been involved in building two replicas, the first one (American Turtle, launched 1977) on the occasion of the American Bicentennial and the second (Turtle, launched 2007) as a joint project between Old Saybrook (Bushnell’s Connecticut hometown) High School where Frese teaches woodshop/technical arts and the Naval Undersea Warfare Center in Rhode Island where Manstan was a mechanical engineer (retired 2006) and Navy-trained diver. Their replicas proved seaworthy, thus validating Bushnell’s ideas and keeping their feet dry.

Anyone with an imagination will find something of interest in this topic and much to appreciate in Manstan and Frese’s forensic efforts. It is one thing for authors to have a plethora of primary sources to sift through to separate the wheat from the chaff but an entirely different one to have only a very few—that don’t agree in all matters. Line by line, even word by word, the authors take the reader thought the four principal documents, all letters that are reproduced in toto as facsimiles or transcripts.

Divided into four main parts (interpretation, replication investigation, and speculation) the book seeks to describe the strengths and limits of Bushnell’s machine, evaluate the technical and popular literature and its writers’ abilities and reference points (what one writer would postulate the next one would dismiss as “reflections of a vivid imagination.”), and to pin down the specific conditions during which the unsuccessful attempts of 1776 were conducted. From mechanical principles to water salinity to phases of the moon, no facet escapes scrutiny and it is endlessly fascinating to follow the authors’ lines of inquiry into minutia such as how, for instance, the buoyancy of the mine—depending, naturally, on the time of night and corresponding density of the water—would have affected the behavior of a 10 ft tall submersible once the weight of the mine was no longer carried aboard, or if it was the build-up of barnacles and algae during the warship’s voyage from England that deflected the saboteur’s drill from having purchase. Such aspects of the story are intellectually stimulating in and of themselves, irrespective of the American Revolution context some readers may not have the slightest interest in.

Manstan and Frese even examine the different meanings of words back then and to that end their Glossary does not only contain technical terms but any relevant word that might have had a different meaning to Bushnell. Moreover, alternate readings of such words are also given, referenced to their first known occurrence in contemporary dictionaries. The Chapter Notes and Bibliography are equally exhaustive, and the Index is simply exemplary in its depth.

The illustrations (photos, technical drawings, cutaways, a few charts) are small and not exactly plentiful; the book’s spongy paper does nothing for their sharpness/contrast.

In terms of clarity of thought and fluidity of writing, the book is exceptionally polished. What makes it utterly unique is that the authors don’t simply theorize, as all their forebears did, but can comment empirically. They built and ran their own machine and in so doing, and only in so doing, are able to make plausible assumptions about the construction and behavior of Bushnell’s original. Their book, literally, does rewrite history.