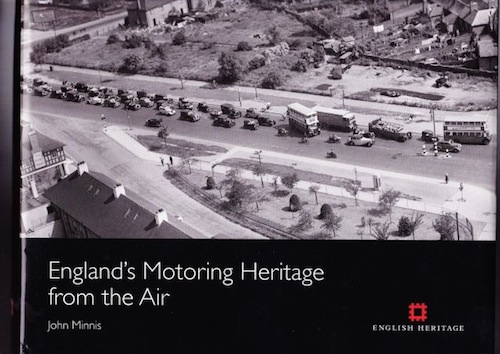 Author John Minnis’ previous book Carscapes gained wide acclaim and some awards. This really is a follow-up to that book. All the pictures in it are from the archives of the Aerofilms Company that English Heritage acquired in 2007. All the pictures are in black and white and cover the years 1919 to 2006. Each is reproduced over a full page with a long caption of explanation on the opposite page and often an enlargement of part of the photograph that emphasizes points made in the caption.

The book is about the way in which the motorcar has changed the landscape of England. The photographs illustrate the rapid extension of towns and cities, the appearance of arterial roads, and the positive impact motoring had on the leisure industry such as the seaside, horse racing, amusement parks, not forgetting motor racing. There are lots of pictures of interesting buildings connected with buses, trams and commercial vehicles, car factories, bus stations, filling stations, and the roadside café and roadhouse.

I must say that I am biased as I love looking down on the landscape, whether it be from a light aircraft or helicopter or, as here, an aerial photograph.

I had not realized just how big city tram depots had to be to accommodate the fleet of trams. Likewise some of the bus depots are much bigger than I thought and so were the actual bus stations they served.

Amongst the motor factories included is a fascinating example from 1920, The Motor Mills in Coventry where Daimler was the first company in the UK to manufacture motor vehicles on a commercial basis. The later Daimler factory at Radford is huge as was Humber in Coventry or Ford at Trafford Park and Dagenham. There is a 1921 shot of Napier in Acton, pictures of Tilling-Stevens in Maidstone, Aster and Fiat in Wembley, and Trojan and Clyno. Also illustrated are Hillman, Vauxhall, and Alvis factories as are Austin, Morris, and Standard.

The chapter that includes road-side filling stations shows the Fountains Hotel at Loughton from 1931 with just three pumps compared with Henley’s garage on the Great West road photographed in 1937 with no less than 22 pumps on the forecourt. There are pictures of Brooklands in 1921, Silverstone in 1971, Brands Hatch soon after it had extended with the Druids loop, and Mallory Park in 1956.

I am always appalled at aerial views of some sea-side caravan parks and the 1969 view of Camber in Sussex does nothing for me other than to allow me to admire its geometric layout. The 1939 view of the Bognor Regis seafront reminds us how dependent we still were on the motorcoach; there are at least 55 in the main car park along with hundreds of cars. We all know about ribbon development but a picture from 1927 shows the recently built Kingsway leading into Manchester, with its wide main road taking trams and buses, and houses in the process of being built all along it. There are only three cars to be seen on this new wide road!

The book ends with some early motorway pictures such as the Preston bypass photographed in 1958, Watford Gap services in 1959, and the building of the Thelwall Viaduct in 1962, and there has to be one of the Gravelly Hill Interchange, better known as Spaghetti Junction.

This is a book you can read straight off or dip in and out of. It really is staggering how views can change in a lifetime.

Posted Under: Automobiles, Photography | Author: Other | No comments yet