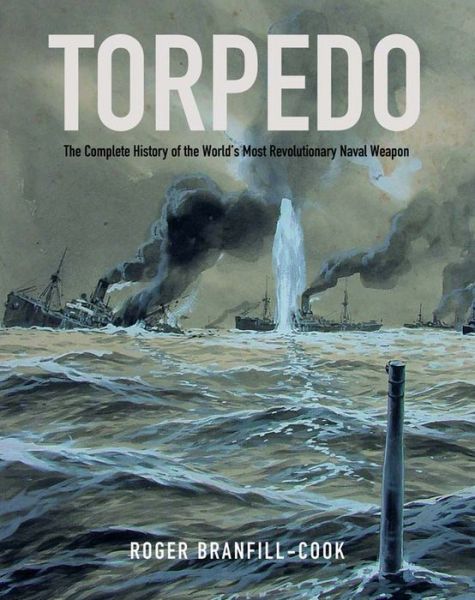 “Training consisted of jumping from boats and practicing descending to their operating depth, and then they would practise walking on the seabed, guided from a boat by an officer pulling on guide ropes. All too often the trainees would be dragged down by their equipment . . . or they would mix up their breathing procedure and suffocate, or the defective brazing on the breathing gear would fail . . . or they would simply become entangled in weeds and drown.”

You’ve heard of kamikaze pilots but these poor fellows were kamikaze divers, the super secret “Crouching Dragons” of the Japanese navy’s Special Service Corps. In 1945! At a time when—one would have thought—the torpedo had long advanced from its crude early days of being towed by harpoons, dragged by kites, or steered into its target by swimmers.

If you don’t already know all of this, the first 20 pages of this book will have you palpitating. Yes, “hundreds of warships and tens of thousands of merchant ships have been sunk by torpedoes, or were so severely damaged that they were knocked out of action for months, if not years” and “the torpedo continues to be the major arbiter of potential naval actions worldwide, some 150 years after Robert Whitehead’s invention first took to the water”—but the story of its development is one of great human cost but also great human ingenuity.

If the “weapons” bit puts a frown on your face, approach this subject as strictly an engineering problem: how to deliver a payload under water, undetected, over a distance, against currents, to a precise spot that is not staying still. In terms of construction, propulsion, guidance etc. a torpedo is truly a staggeringly complicated apparatus.

After some preliminary words, the book begins with the Nautilus submarine. Not Jules Verne’s Captain Nemo but American inventor Robert Fulton, the same Fulton who appears in Gershwin’s song “They All Laughed,” as in laughed at: “Fulton and his steamboat, Hershey and his chocolate bar.” The same Fulton whose offer of a submarine replete with munitions a shortsighted Napoleon (Bonaparte, not Dynamite) turned down. Fulton was not the first to tinker with submarines or torpedoes but a book has to start somewhere and his is a perfectly good story from which to begin an inquiry into the origins of what the book rightly calls “the greatest single game-changer in the history of naval warfare.”

Branfill-Cook’s former professional life as an insurance underwriter will have shaped his ability to think in cost/benefit terms, and half a decade worth of studying naval subjects have given him a commanding grasp of the existing literature. He offers this book as an encyclopedic overview and introduction to a vast topic, its main purpose being to combine a multitude of sources into a convenient one-stop reference work.

His focus is on the mobile type of torpedo, not the moored mine although a few hybrids are discussed too. Although there are only a few basic types there are hundreds of different models and so as to keep the narrative flowing, their pages and pages of specs have been relegated to an Appendix. And flow the narrative does, witness the opening quote above.

After presenting the early inventors and launch and delivery mechanisms, the book examines the other side of the coin: anti-torpedo defense, and both these aspects are then demonstrated in a closing section that reviews notable actions and incidents. Everything is thoroughly illustrated with drawings and photos (all b/w) and the book will not fail to engage the reader’s imagination and impart an interest in something the proverbial man in the street has little occasion to think about—until it makes headline news and the fate of the world is in peril. (The last time—that we know about!—was only in 2010 when a South Korean corvette was sunk by what all the world believes to have been a North Korean fish.)