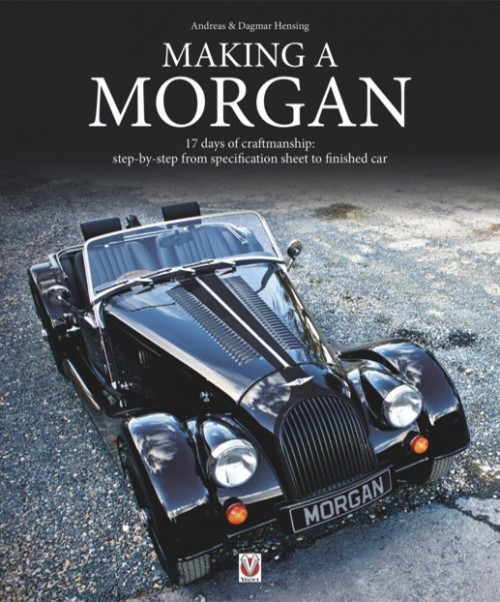 “The 4/4 and the Plus 4 have remained ‘The Morgan’ typified, in classic style since 1954, or, in terms of basic concept, since 1936. As such, these models leave in their dust any other automotive claimants to the title of longest production run. Moreover, the end of Morgan production is nowhere in sight.”

Everything about this book is remarkable—the idea, the execution . . . and that no one had thought of it before. When you think about it, the almost completely handbuilt Morgan seems the obvious choice for a blow-by-blow look over the shoulders of the folks who make it—some of them third-generation descendants of the original crew—in pretty much the same place it all started, over a hundred years ago.

It is especially remarkable that no British author had thought of it (this book is written by German Morganists) because the UK despite running its entire automobile industry into the ground in the 1970s has kept a superlative cottage industry alive. With annual revenues of £35 million and some 160 people on the payroll the Morgan Motor Company, founded in 1910, is somewhere in between the small and the 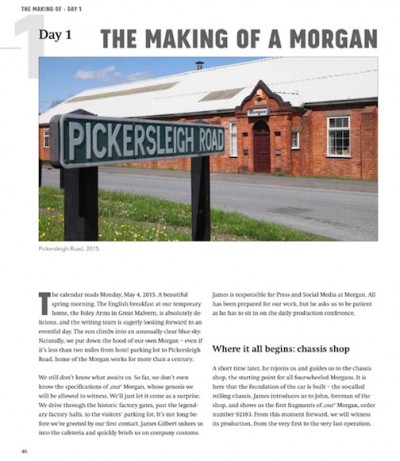 large manufacturers but it does take them more than two weeks to bolt a car together (Lamborghini, for instance, does it in two days nowadays.)

This is the authors’ third book about Morgans so they are not new to the car or the maker. Also, they own their own, small publishing house so they know how to put a publication together that maintains their own standards (although the German original of this book was produced/distributed by the big-leagues house Heel) And this book, let it be said, is a fine specimen in terms of the quality of the writing, layout/design, and re/production. In fact, Veloce Publishing in the UK who produced the English version could hardly do better than to emulate this more opulent approach for their own books! Neither the translator nor the proofreader are named but they deserve kudos for exemplary work. 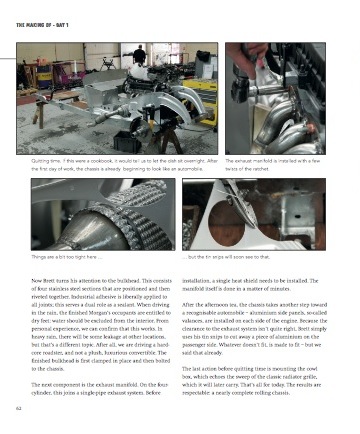 Two years in the making, and with full cooperation of the “factory,” the book describes 17 consecutive days of a complete build, from clocking in/out to tea breaks. Also described are such ancillary steps as placing the order and specc’ing the car, the latter of relevance because it triggers warehouse actions before the build commences to either pull from stock or otherwise source specific items that will be needed on the shop floor.

Naturally the book begins with a look back. Very, very far back. We pick up the story in . . . 1534. Well, indirectly, because a political decision made then would hundreds of years later afford a Morgan who had joined the clergy the possibility to marry, a union from which would spring the founder of the Morgan company. His church, if you are or become a Morganist, is a must-see on your pilgrimage to Malvern (unusual for a church, any church, its stained glass windows even show Morgans). 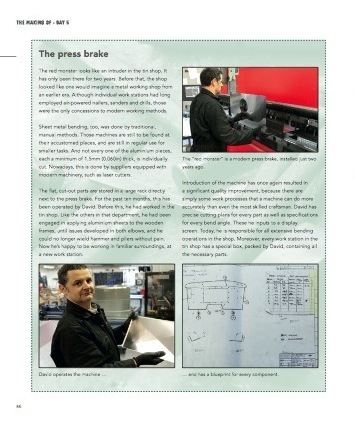 So, the story proper begins with a good overview of the company’s philosophy and history, the Morgan product range and, not least, some thoughts about the sort of customer who willingly shells out a quite steep amount of money for a car (or three-wheeler which amounts to 25% of the orders) that is so Spartan that it takes real commitment to own. Not considering the ($80,000+) Aero range of cars, electric power steering is as fancy as it gets, and that only on the Roadster! With a survival rate of 90%—and a wait time, at the best of times, of several months and on occasion several years—these machines are obviously cherished.

Visitors who’ve been to Malvern in Worcestershire may be positively shocked to see that a CNC machine was installed some years ago. The book will obviously appeal to anyone who is curious about this type of work, regardless of any specific Morgan affiliation. 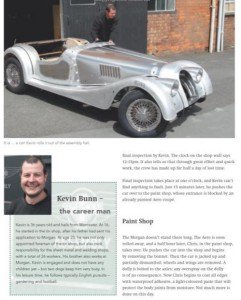 Absolutely every step is covered, as are the craftspeople and Morgan managers. The only thing that could have made the book more personal is if everyone had signed it! Incidentally, the owner of the car whose gestation is documented here had no idea his car would be immortalized in this way—and his courtesy copy will be autographed.