Mustang Genesis: The Creation of the Pony Car 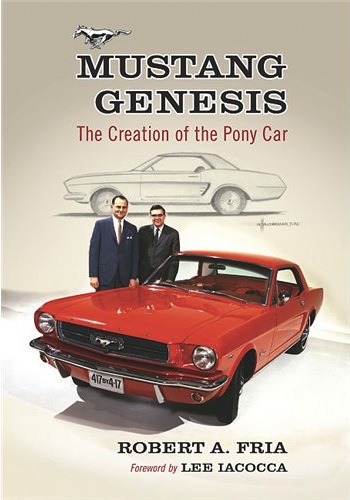 by Robert A Fria

“They [youngsters] want the appeal of the Thunderbird, the sporty look of the Ferrari, and the economy of the VW.”
—Chase Morsey, Ford Competitive Analysis Dept.

2015 is the Mustang’s 50th anniversary and that generation of cars will be the first to be a true world car, meaning it will be different from any Mustang before it. This time, the quintessential American car has to be designed with non-US driving conditions (width of roads, distances, traffic density, fuel costs etc.), regulatory issues (taxation, insurance etc.), and esthetic sensibilities (size, shape, graphics etc) in mind. Will one size fit all?

Already we know the car will at last have independent rear suspension instead of a live rear axle. (Sound of purists groaning.) The suspension (probably a version of Ford’s Control Blade) will be similar to that of the Australian Ford Falcon. And the Camaro will still be around, that perpetual point of comparison. High time, then, to take a look at the lay of the land that confronted the planners at Ford who were looking for something new. Read the title, folks: Genesis. This book is not a nuts and bolts or even a model history but the story of the idea that would become an iconic car, and the men behind—and against—it.

If none other than Lee Iacocca, whom everybody but himself calls “the father of the Mustang,” pronounces this book “perfectly accurate and an excellent read” who would quibble? We don’t. He wrote the Foreword and as recently as 2009 was fully immersed in all things Mustang, masterminding that year a limited-edition run of 45 custom hand-crafted Silver Edition 500 hp Mustangs developed by him, designer Michael Leone and Gaffoglio Family Metalcrafters, and sold exclusively through Galpin Ford in Southern California.

Fria has the distinction of owning since 1997 the first Ford Mustang hardtop with a factory-issued VIN (5F07U100002) and fully restored it. That alone does not make him an expert, it’s the 10 years of research and the tracking down and interviewing many of the surviving players in the Mustang story.

The book is obviously about one particular car but anyone with an interest in how cars come to be, from the conceptual to the practical, will find Fria’s book useful. As an “idea” the Mustang represented completely new ground, totally visionary out-of-the-box thinking, one of the supremely bright moments in the history of car making. It is also one of the most inspiring examples of a dedicated band of enthusiasts risking if not life and limb then career and paycheck to work magic despite their corporate bosses telling them not to.

Fria is a retired United Airlines Captain which may well account for his methodical, disciplined approach. Frustrated with ambivalence and all-out errors in some of the existing literature, Captain Bob uses only documentable information. Since so many of the principals had their eyes on the facts in this book, and are often quoted at length, one must surmise that this is now the book with which to settle bar fights. With that in mind there is a nit to pick: considering that the Preface makes much of the fact that the book finally says the definitive word about the origins of the Mustang name one would think that the Index would reference something this important, or the badge/logo design, but it does not (see p. 75ff, 83, 126).

To set the stage Fria summarizes the post-Word War II mindset, leisure, disposable income, and the place in the world of Ford the company and Ford the family (Henry II: “complex and crazy like a fox”.) Since the Mustang would turn out to be such a radically different car Fria makes an effort to explain how Ford went about taking the pulse of the market and explains the impact of costing and the role of the stylist, the emergence of the compact car in general, and the pros and cons of various pre-Mustang concepts and proposals. The theme here is that individuals make a difference—and if Iacocca ever claimed anything it was that he picked good people. Chapter 4, “The Players,” is in fact an eminently useful companion to pretty much any other Mustang book you might own because it consists of bios of all the people in his handpicked think tank (the Fairlane Committee), and others. (Not in alpha order; go figure.)

Once the story zeroes in on the Mustang proper Fria wants the reader to grasp that the two-seat ’62 Mustang [the styling concept] and the four-seat ’65 [production] Mustang are two “entirely separate and distinct programs” despite sharing a name. The story of the prototypes, Mustang I, Mustang II are worked out and the corporate review and approval process explained, ending with the history-making launch.

Unless you work in the auto industry, and specifically in the areas of product planning, design or marketing, many of the topics covered in this book offer important background and insights, some of which new to the Mustang record, into the process of making a car.

The book is suitably illustrated; photo captions are on the brief side, to get the most out of them you will have to read the text or miss out on detail; color photos are bundled into one section in the center.

Considering that the Bibliography includes interview particulars we surmise it is a list of sources consulted rather than a pointer for further reading in which case it would not be a representative overview of the key publications on the topic. Considering the great amount of detail in this small book, the Index does not fully capture it.

Posted Under: Uncategorized | Author: Sabu Advani | No comments yet