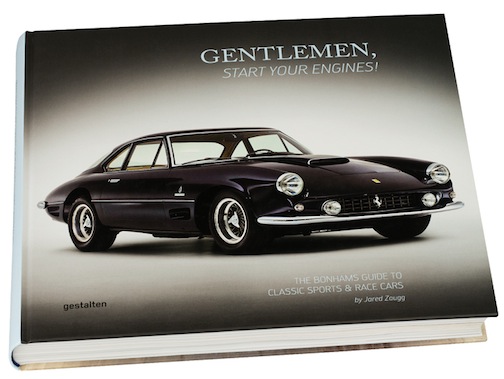 If you follow automobile auctions you know the British auction house Bonhams—and you know that auction catalogs are a crucial part of the proceedings. Usually well-made in regards to research and most often top-notch photography, and often running to hundreds of pages, catalogs of the blue-chip auction houses are a long-term reference tool for the serious researcher and, over time, collectible in their own right. 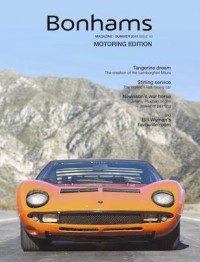 Anyone can buy one but they’re not cheap because they also gain you admission to the auction. (Bonhams also publishes its own in-house magazine, right, available by subscription.)

This book is both a dressed-up and a pared-down version of those catalogs. The former because it’s, well, a proper, large-format (and landscape), beautifully produced hardcover book and the latter because it is somewhat less focused on the sort of micro detail a potential buyer would require to guide his strategy.

Featured here are 51 vehicles from auctions held worldwide between 2006 and 2015. Privately owned Bonhams has been around much longer, since 1793, and is one of the world’s oldest and largest auctioneers of fine art and antiques with nowadays some 400 annual sales through its 60 specialist departments. In Europe, their Motoring Department is probably the largest player and in 2013 booked the highest-ever price for a car at auction, the ex-Fangio/Herrmann/Kling 1954 Mercedes-Benz W196R Formula 1 car (£19.6m, included in the book).

But not everything in this book is stratospherically expensive, in fact that is specifically not its point. From a 1902 De Dietrich to a 1997 McLaren F1 GTR, the common denominator here is cars that have 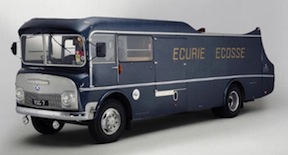 “an emotional impact” and have a sporting/racing flavor—which is why a ’61 Mini Cooper 1275 S Competiton (£85,500) makes the cut, as does the famous Ecurie Ecosse race transporter (fetching a price that’ll make your eyes water).

Lead author Zaugg is probably best known on the motorcycle scene, not least as one of the driving forces behind the now-defunct (since 2009) “Legend of the Motorcycle” concours d’elegance. He is here joined on the writing end by publisher Robert Klanten as editor, and Basem Wasef authored nine of the car profiles. Photographic contributions are by Pawel Litwinski (the majority), Michael Furman, Tom Wood, and Simon Clay.

If you do have the respective catalogs you’ll quickly see that the photos here are mostly not duplicated. With two exceptions there are also almost no period photos. The text in the catalogs is usually penned by Bonhams specialists who in turn draw on a network of subject matter experts such as editors of club magazines and book authors etc. Presumably Zaugg acts here more as editor of catalog text than principal author because the basic talking points of the text are the same as in the catalogs but recalibrated for a less specialized readership. Even so, the text is rather more detail-oriented than your general run of the mill classic car book. The auction catalogs naturally assume their readers to be quite knowledgeable and less in need of in-depth model and marque history than driving impressions, special features, and ownership and restoration highlights of the specific lot on offer. This book combines both aspects but trades catalog-type minutia for approachability. And while it does state the sale price it omits the catalog estimate whose range is for collectors/investors an important barometer for the state of the auction market.

In at least two cases the book text introduces typos were there were none in the catalog/s: Bützi Porsche (p. 283) and Austin-Healy (p. 116) so no cigar to the editor/s and proofreader!

There is plenty of diversity here in terms of breadth of cars included but while this book is more selective than general auto histories it is far more sophisticated in terms of describing what makes each model special. Also, compared to most books, this one, as most others by this German publishing house, is of entirely uncommonly quality—rounded spine, headbands, correct weight of cover boards, thoughtful layout and design etc.—belying its modest price.