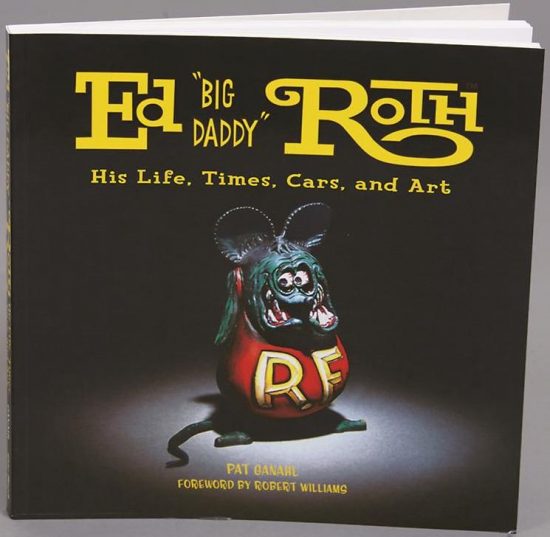 Vincent: Yeah, baby, you’d dig it the most.

We are going to the Amelia Island Concours d’ Elegance in 2018. Missed a few years. But, that’s all there is to it, we’re going. Why? Because the cars of Ed Roth will be on display. The AIC is better known for historic race cars, timeless sports cars, and blue chip classics, although hot rods and customs, these last several seasons, have been making inroads. Featuring The Beatnik Bandit and The Outlaw at this prestigious venue will achieve for this trend an apotheosis of sorts. 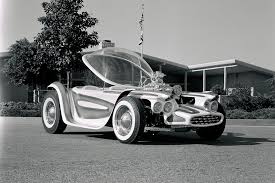 There are other contenders, but Big Daddy Roth (1932–2001) is on the short list of those who just might be the embodiment of hot rod culture, thus there are a handful of Roth books available. Ganahl’s book is the most balanced, most attractive and the most thoroughly researched, and, too, he corrects some errors and teases out some misconceptions found in Roth’s autobiography Confessions of a Rat Fink. There is an index and a table of Roth-related articles as found in the leading car magazines. And we like the layout and the graphics, especially the endpapers, a wallpaper rendering of rows of alternating little and big Rat Finks. 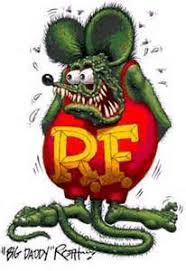 Early years are covered—with pictures of Roth’s parents, his baby photos, and photos from his high school yearbook. Early on Ganahl describes the geography of Los Angeles and environs showing how this relates to the early days of hot rodding and car customizing, and we favor this attention to detail. Also we appreciate how he, in depth, shows the conception, the building, the show circuit history, the reconfigurations and the subsequent changes of ownership of many of Roth’s show cars, dragsters, trucks, motorcycles and go-karts. Ganahl was privy to a trove of vintage photographs, was involved professionally in automotive journalism, knew and interviewed many of Roth’s friends and colleagues, and his collection of Roth catalogs and period copies of Rod & Custom and Car Craft give substance and weight to the book. 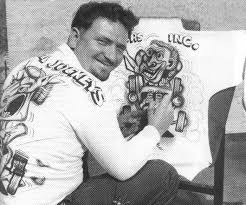 The man himself, Ed Roth, comes across as a gifted engineer, designer, mechanic, fabricator (think fiberglass and Vermiculite), pinstriper, painter, self-promoter, showman, entrepreneur, and artist. He is shown to be always busy, the hands always moving, either gesticulating or completing his numerous projects. Something else comes to light: As he is known as much for his weirdo-monster shirts as for his cars and bikes, it is here that we find, curiously, a rough parallel to Andy Warhol’s Factory: Although bearing Roth’s signature, many of the tee shirts and sweatshirts were designed and drawn by others—as were much of the incidental artwork, the cartoons and catalog illustrations.

Roth’s rather colorful business relationship with Revell, producer of 1/25 model car kits, is discussed as is his infatuation with both surfing and motorcycles lifestyles. The latter, for a brief time, with fistfights, guns, paranoia and trouble, took Roth to the dark side. But at heart Roth was a beatnik. He was quirky and impetuous, but he comes across as someone genuine, a decent person. Always he was generous to his friends and his many hangers-on. And of all the weird facts related in the book, the weirdest, or at least the most unexpected, must be when Roth shaved off his goatee and was baptized as a Mormon. All of this is confidently reported. After putting the book down, you just might wish that you had had the opportunity to say hello to Big Daddy Roth, perhaps crouching down beside him chatting as he took the ever-present chalk from behind his ear to sketch scallops on somebody’s late model Chevrolet. Another Speedreaders recommendation. See y’all at Amelia. 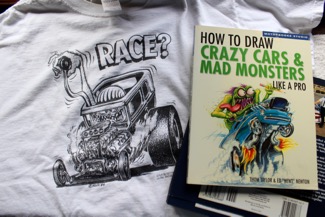 Posted Under: Art, Artists and Design, Automobiles, US | Author: Bill Wolf | No comments yet