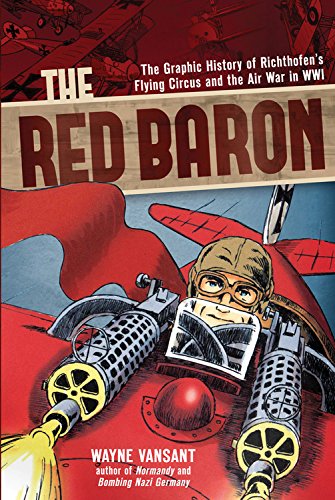 This graphic history book was produced by Zenith Press, a respected publisher of quality books, so I blindly ordered it and hoped for the best. Would they lead me wrong? I hoped not, and I was right.

The book starts with a thumbnail sketch of how WWI got started in August 1914 and then stagnated into four years of trench warfare. Development of the air war is described and displayed in the opening chapter, “Hunters in the Sky,” along with a detailed visual account of von Richthofen’s eleventh kill. The second chapter, “The Guns of August,” takes us through von Richthofen’s family military background and his childhood growing up on a country estate in Lower Silesia, in what is now Poland, before entering the military as a cadet at age 11, and joining the Prussian army at 19 as an officer. 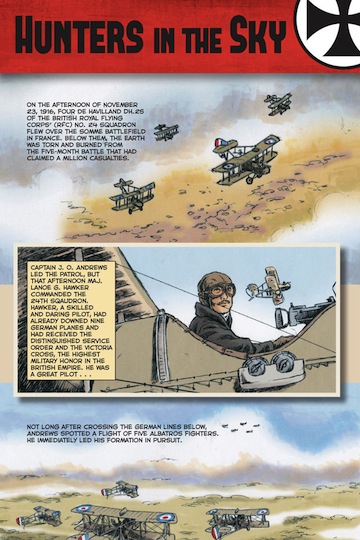 After serving on the Russian front, von Richthofen transferred out of the infantry and into the air service first as an airborne observer, then as a pilot. The rest, as they say, is history. By the time von Richthofen was finally shot down and killed on April 21, 1918, at the age of 26, he had destroyed 80 enemy aircraft (more, but not all were counted, for various reasons), killing the majority of the pilots.

Nine more well-illustrated chapters fill out the bulk of the book, with titles like “The Fokker Scourge,” “Fame & Injury,” and “The Last Patrol,” followed by Appendices picturing and describing famous pilots in the French and American armed forces, a description of the Lafayette Escadrille, and illustrated biographical sketches of famous pilots Raoul Lufbery, Eddie Rickenbacker, and Frank Luke. Closing things out is a visual and technical presentation of the important German, British and French combat airplanes flown during the war. For those readers interested in more traditional reading material about Manfred von Richthofen, the last Appendix lists 11 books about the man and his times. 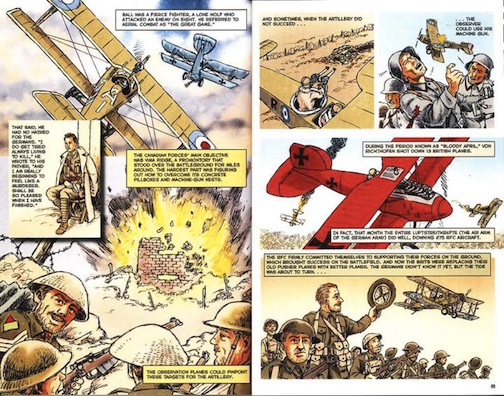 After author Wayne Vansant left the Navy he became a museum guard, attended art school, and started illustrating comics including The ’Nam, with a long-running story line. Vansant then began freelancing, illustrating various technical publications and a comic edition of The Red Badge of Courage for Penguin Books. That experience led to more illustrated military histories as well as graphic books on the abolitionist and civil rights movements. At age 65, Vansant is still writing and illustrating war stories, fictional and otherwise. 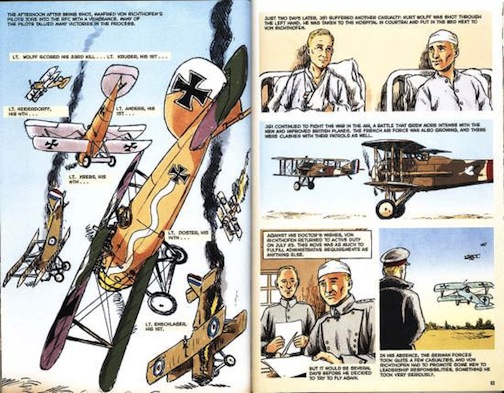 So, in which category does this book land? Comic book or history book? I’m happy to report The Red Baron is a two-in-one winner—an interesting and informative history book in a well-thought-out graphic presentation. While I can’t say that I wish all history books were graphic, I can say that this graphic history book has been an eye-opener. I will be far more receptive to the concept in the future, and am curious now about the author’s four other graphic history books covering various aspects of WWII and the American Civil War.

The biggest problem this book may have is convincing the general public that a graphic history book is worth reading and seeing. If Vansant’s 304 drawings can be thought of as substitutes for photos of von Richthofen’s aerial battles and life during WWI, and a photo is worth a thousand words, then the 304 drawings in this book are collectively worth 304,000 words. That’s a lot of history wrapped into just 104 pages. 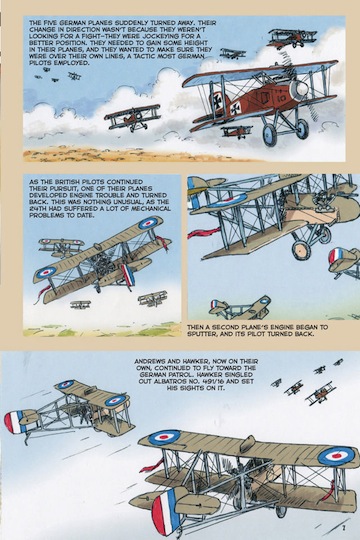 The drawings are like quick study sketches made prior to starting a more highly detailed composition. The coloration is broad-brush and cartoon-like, yet effectively done with shading, speed and vibration line accents, keeping things animated and active-looking. The viewer/reader quickly falls into the story and watches as dogfights and events of the day unfold before their eyes. Vansant’s excellent use of perspective makes the interaction of men, airplanes, and the battlefront all flow together seamlessly throughout the book.

The cover art is representative of the art within. Basically simple, yet detailed where it needs to be. The planes don’t all look the same. Human faces are individualized and recognizable. Military markings and uniforms are distinctive and accurately represented. The historical story line is told neutrally without bias toward one side or the other. It’s WWI as seen from the present without any of the emotional propaganda churned out by both sides during the war.

Unlike a newsprint comic book, the high-quality paper stock is glossy and substantial, making for a long-lasting edition resistant to tearing or smudges. I liked it.

The Roycean: From Manchester to Crewe, via Derby, No. 6 »
« The Ride: New Custom Motorcycles And Their Builders