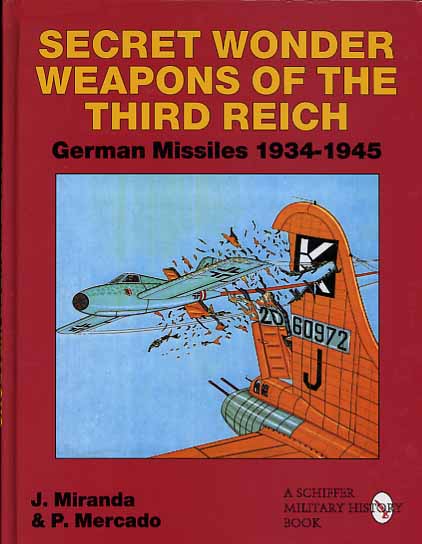 Just based on the title and cover art I resisted buying this book for many years! It sounded and looked too comic-bookish to my eye. Twelve years after it first came out I finally decide to take a close look—only to discover a fascinating world of clever ideas, desperation, and edgy technology. (There’s a lesson in this: book designers = your choices do have, for better or worse an effect; readers = don’t be snobs!)

Much like throwing a last-second game-deciding Hail Mary pass, the German military scrambled to develop weapons based on rocket and jet technologies that would save them from losing World War Two. They never did, obviously, but that was not for lack of trying. They were definitely on the road to success with their rocket engines and advanced airframes, but the clock ran out on the war before they could make it happen.

The book identifies and illustrates to scale dozens of different missile designs and their variations, covered in four main sections: guided, piloted, ballistic, and anti-aircraft. Each missile is described in a two-part format. One part for statistics, the other for scale drawings of all the variations discussed. Although there are 70 pages of drawings, there are frequently six or seven drawings on each page, making for over 400 individual illustrations! The statistics page lists technical data: size, power plant, speed, range, fuel type etc., plus thumbnail descriptions of the basic project, listing which German company built the prototype, whether or not it was successful, and if not, why. All very interesting stuff. There is no story line, per se, just drawings of rocket plane after anti-aircraft missile after crazy idea: a V-2 rocket with a pilot to improve accuracy. (“Just get in there and don’t worry about getting out. You’ll be fine.”) The very real but never operational A10 rocket project that planned on using existing operational V-2 technology to launch a piloted arrowhead-shaped two-stage missile designed to bomb New York City with either conventional explosives or a nuclear weapon. That and more, large and small, are accurately drawn out to scale in outline form.

The drawings are well done and, as mentioned in the book’s Introduction, make excellent 1/72 blueprints for modelers wanting to build these machines. Every now and then the drawings are enhanced with construction and camouflage details. On 16 pages the drawings are in color, and show operational details in cutaway form, color-coded to distinguish fuel tanks, guidance systems, fuel flow, pilot position, and other things of interest.

The proofreading is a bit weak. This book was originally published in German, and whoever did the translation into English was unable to make the jump a smooth one. Nothing distressing, just the oddly phrased sentence here and there, and words like “listing” being misspelled as “list.ing” over and over. The graphic layout of the book is uninspired and more industrial looking than it needs to be. But the quality and quantity of the data makes up for the lack of a graceful presentation and makes the book worth owning if you’re interested in the weird science that began to emerge at the end of World War Two. These frantic last-minute efforts of the German military helped introduce the age of robot warfare to the world. Sophisticated variations of the basic weapons displayed in this book are in use today everywhere.

The book opens with an Introduction and quick explanation of why the weapons were produced by “German scientists and engineers, working under high Pressurizer” [sic]. Following that are four sections: “The First Missiles,” “Selbstopfermanner,” “Space Flight Origin” and “The Defense of the Reich.” Four Tables help the reader understand abbreviations and what 18 different fuels like A-Stoff and SV-Stoff were made out of (liquid oxygen and red fuming nitric acid, respectively). Eleven pages of war-period photos show operational and prototype testing. The book runs out of page numbers a few pages short of the end, but it doesn’t matter. No Index. For a completely different and even more advanced orbital bomber design (not covered in this book) check out another Schiffer book, Sänger: Germany’s Orbital Rocket Bomber in World War II.