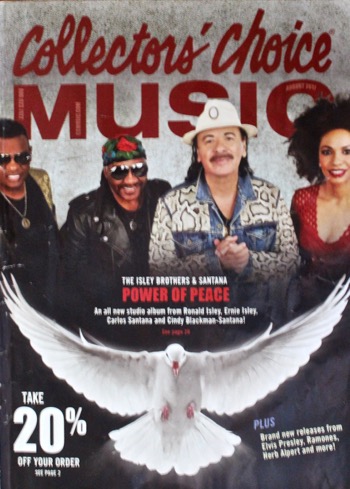 We can’t help comparing this catalogue of CDs and vinyl records to a 1928 catalogue of buckboard supplies, wagon springs, horse traces, and buggy whips. Sure, there were still plenty of customers out there then to sustain business, but the Model T Ford had been in production for twenty years in 1928 and the writing was on the wall. Even today catalogues for buggy and horse-drawn wagon supplies are available, but certainly these would be useful only to a small niche customer base. How many more years will Collector’s Choice stay afloat? A 20% discount is not light. Assuming they cannot figure a way to become a music streaming service, it would seem that their days are on the short list. Or will collectors keep them going for a decade or two more?

Their future must surely rely on the fact that serious collectors crave things—tangible objects. A digital collection of streamed music has its uses and appeal: Ease of operation, ease of finding that particular song, nearly unlimited selection, tailoring playlists, instant availability over any number of devices and, at least on a Mac with iTunes, having your screensaver as a continually changing grid of miniature album covers. But does that really compare favorably to the amassment of objects, CDs in jewel cases or LPs in record jackets that can be alphabetized or rearranged by the collector’s individual predilections? There is something gratifying in the overall display. The pleasure of showing off the racks and tiers to interested parties, each and every gem complementing one another, the whole becoming sweeter than the sum of the parts. It is not difficult to picture the collector spending quality time just standing in front of his hoard, liking the patterns of the spines, removing this one or that one to admire the artwork or glance over the liner notes. Noticing a disc that had been momentarily forgotten in the ever-expanding collection. Correcting a misplacement. Finding that keen rush of bliss in handling—fondling?—a true rarity, one that only few or none other possesses. Yes, there is that too in the collector’s soul, that selfish, prideful sense of knowing that he has acquired something truly exceptional, something singular. But don’t be too judgmental as there is a very good chance that our collector expended a great deal of time, effort, and money for such an acquisition. Our catalogue features the collection of and an interview with one such collector, Derrick Grubbs from Texas, with photos of his CD racks, topped with a Beatles poster and the horns of a Texas Longhorn steer.

Also there are a two-page artist index, a list of books and DVDs for sale, and a cheery introductory note from Van Horn, but, naturally, the heart of the booklet comprises page after page of items for sale. Many albums are shown with a small reproduction of the cover art, and all have a brief description and history of the artist and the album itself, along with a partial track listing. These descriptions, not surprisingly, offer no negative comments, but extol each and every album: “A new level of songwriting brilliance,” “a breakthrough smash,” “spanning 19 years of a legendary career,” “the most crucial,” “a treasure trove for fans” and “folks have been pumping fists to these classic rockers.” As Collector’s Choice has been in business since 1993, we credit the copywriters who toil to create fresh adjectives and new turns of phrase. The music for sale is mostly pop and rock, although pages are given to classical, country, folk, R &B, blues and jazz. Rap and hip-hop are absent. The first few pages offer new releases, but these aren’t really new, but rather re-releases, new compilations and out-takes from older artists (Collector’s Choice licenses material from other labels and sells it under their own brand, but they also sell material from standard labels.). There is at least one exception to the “no new material,” and that is the album featured on the cover. In July of 2017, Carlos Santana, Cindy Blackman-Santana, Ronald Isley and Ernie Isley released Power of Peace. 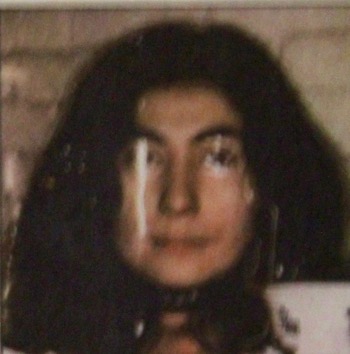 But these artists are hardly new on the scene; even Blackman-Santana has been recording for roughly thirty years. Santana gigged at Woodstock and The Isley Brothers peaked in 1959 with their indomitable Shout (Parts One and Two).* We knew that Santana has continually produced new material over the decades, but we were surprised to find that the Isleys have also been busy. The catalogue offers ten CDs and one DVD of Isley material, four of the CDs being compilations. Santana weighs in with seventeen albums (this number includes compilations)—one of these being a five CD set, one with three CDs and seven of them holding two discs. These artists then are well represented.

They are not the only ones. Linda Ronstadt has five CDs listed, Genesis ten, Depeche Mode fifteen. The Pet Shop Boys, Yoko Ono, and Isaac Stern have three each. Dick Dale has four CDs for sale, and there are two full pages given over to both known surf music groups (The Ventures with seven albums, Jan and Dean with one) and several compilations of more obscure surf bands (Thom Starr and the Galaxies, the Tandems, Aki Aleong and the Nobles, the Dantes). Thousands of songs are available through this catalogue (Amazon, a major competitor of Collector’s Choice, advertises that they offer tens of millions selections!). And this brings us to notions that we have been considering for some time now: The immensity of the world of music—and the idea of interchangeability.

The answer for the consideration of musical immensity is simply that it makes sense that even though millions of songs are available to the consumer, there are millions of consumers; and although many fans enjoy the same music (Taylor Swift and Adelle come to mind), there are many who seek the lesser known. There is a satisfaction in finding a recording artist who veers from the mainstream, and this involves a kind of status, a self-indulgence of hipness. We all cherish and keep in touch with the music of our youth, the ongoing soundtrack for our coming of age, having sex, falling in love, becoming aware of art and ideas, finding a career, forging new friendships, and developing our ego and our id. So as each generation goes through the process, a new batch of artists comes along to create the aural backdrop for our lives. One-hit-wonders come and go by quickly while more gifted and determined artists sustain consumers’ interests for decades. There are tiered levels of talent and fame, and someone who, back in the day, enjoyed The Rolling Stones and The Allman Brothers may have also listened to lesser groups such as Jo Jo Gunne, Mountain, or Blue Cheer. And as the 1970s rolled into the 1980s and beyond, artists such as Journey, Phil Collins, Men Without Hats, Pat Benatar, Adam Ant, and Cheap Trick all developed a fan base. And this only skims the surface. What of Classical, Jazz, Funk, Soundtracks, World, Easy Listening, Girl Groups, Bubblegum, Pop, Glam, Heavy Metal, Hair Bands, Punk, Folk-Rockers, Stadium Rock, Indies, Hip-hop, and Rap? Consider too that each of these could be dissected into sub-genres—and then there are the outlier groups who play, for example, Horrorcore or Death Metal. Collector’s Choice shuns these, but the others on the list, through the years, have been well represented, and album after album have been put out for sale. We must assume that there is a vast audience, segmented, that pours through the catalogue, finds favorites and buys, keeping the company in business. Does a true fan really need fifteen albums from Depeche Mode? Probably so. Will such a fan listen to all the albums over and over again? Perhaps. But the key is that we are dealing with collectors as well as fans, and, yes, collectors are as interested (more so?) in completing a set as they are to listening to every song on every album. How many copies of The Strawberry Alarm Clock can be successfully marketed? Bear Mountain Records out of Germany offers a nine-CD boxed set of Johnny Horton tunes—remember North to Alaska? Recordings of Beethoven’s Eroica go back ninety years. There must be hundreds of renditions from which to choose and, surely, the differentiation among the majority of these must be marginal at best. What of the indeterminable amount of Grateful Dead bootlegs traded among Deadheads and what of those musicians hustling their homemade CDs down on funky Broadway? The immensity will never go away.

Our idea of interchangeability comes across as being much more hypothetical, more speculative, more abstract, less defensible, but we feel that it is an interesting thesis nonetheless. Rudy Vallée to Bing Crosby to Billy Eckstine to Frank Sinatra to Smokey Robinson to Engelbert Humperdinck to Kanye West. Ma Rainey to Billie Holiday to Sarah Vaughn to Janis Joplin to Beoncé to Amy Winehouse to Pink. We’re crossing here, what?, five generations, and for each fair young lady and for each young swain there is that particular song of love (and most of the millions of selections are love songs) that alone can describe perfectly her or his motion of the heart. But the example above does not really address the issue. There is some suggestion of interchangeability there, but the idea is a matter of changing times and changing styles. When my Mom was a young woman, she thrilled to the crooning of Bing while my nieces embrace Amy’s heartbreak and party to Pink. But there is still the germ of this perception that, in intent and utility, there does exist a certain unavoidable overlap and duplication.

What we are attempting here goes beyond this. It runs to the idea that embraces our catalogue’s raison d’être. It has to do with questioning the need for so much selection. How many Matt Monro clones are necessary? Isn’t one C-list British blues band much the same as another? Aren’t a dozen C-list rappers pretty much like another dozen C-list rappers? Isn’t there at least some interchangeability in all of this? Do we as a society, as an interconnected fan base, actually need tens of millions of song selections? Wouldn’t the world of music be more tidy and more accessible if thirty or forty percent of these selections were to vanish? Admittedly this hardly proves our argument. Devoted fans of Tommy Leonetti, Steamhammer, and Triple O.G. are no doubt quite unhappy, if not downright angry at us, for even suggesting that their favorite is expendable. So it goes then that the idea of interchangeability doesn’t quite hold water—and that is why Collector’s Choice still mails out thousands of these catalogues quarterly: There will be at least one fan out there, beside the many who are buying mainstream, willing to pay those twelve dollars for that particular favorite beloved obscurity.

Note: The CD stacks are from the author’s personal obsession collection.

*We fondly remember participating in Shout Circles at the high school hop—doing the Twist, the Wahtusi, and the Mashed Potatoes too.

Maxwell Motor and the Making of the Chrysler Corporation »
« Cruise O Matic: Automobile Advertising of the 1950s