Mercedes-AMG GT, A Star Is Born 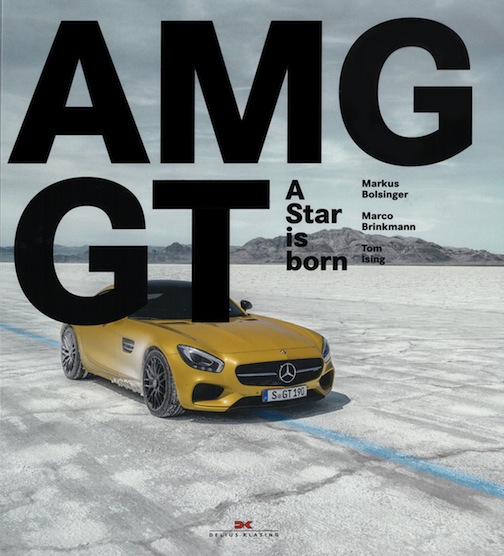 “Anyone can put on a pair of standard off-the-peg jeans, ‘you’re doing nothing wrong, but nothing right, either.’ But anyone that consciously opts for something special, ‘has made a conscious decision.’”

Wait, did we pick up a quote from a different book?

(German / English) No. Up and coming Austrian fashion designer Roshi Porkar’s (below) remark about jeans which close out this book do apply inasmuch as they speak to a bigger issue that should very much 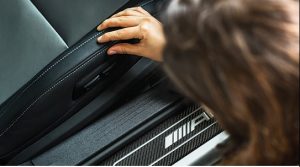 be on the mind of a prospective AMG GT buyer: “The question is whether you attach importance to design, quality, performance and exclusivity.”

Cars in this segment and at this level are expensive enough to not be frivolous purchases. You don’t buy an AMG GT because it’s the only model in your color of choice on the lot. You buy it because its designers’ and engineers’ philosophy resonates with you—and that is what this book is trying to convey. And you don’t buy this book, never mind that it is cheap enough to be an impulse buy, for its technical minutia or neutral reporting or sweeping insights into this car’s place in the automotive universe but because you want to feast your eyes on interesting photos of an interesting car and also, and particularly, to get a whiff of that “secret handshake” aura that surrounds the fraternity of AMG owners who really do get special perks from the company. This latter cannot be brushed aside as mere AMG PR hype because it is a notion expounded in a chapter contributed by a perfectly respectable motoring journalist, Jason Cammisa, Senior Features Editor at Motor Trend since June 2015 and before that Senior Editor at Road & Track and Automobile magazines. He also does freelance work which is probably how he got this book gig. A memorable quote: “[The GT] is the car that all AMG drivers should aspire to own—should it not already be in their garage.” This, then, is the primary audience for this book. 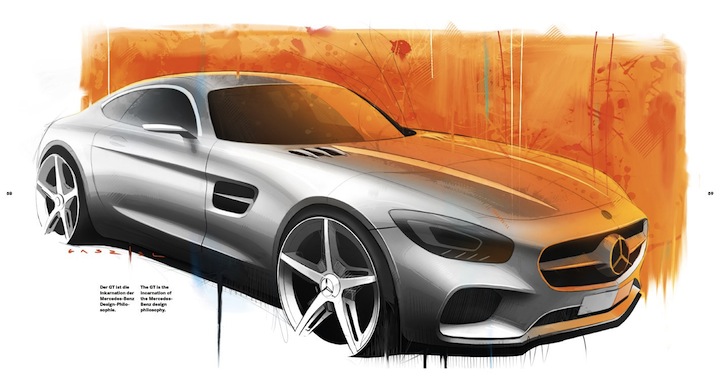 If you are a devotee of the Porsche 911 or Audi R8 and look to this book to validate the righteousness of your choice, you’ll not find any objective parameters. Much of the writing here is from AMG and M-B folk, and the only comparisons they allow is to other in-house product such as the SLR McLaren and AMG SLS. More importantly, the opening salvo, fired by Adam Baumgaertner, sets forth that the whole Gran Turismo idiom—“. . . a weighty, up-market four- or 2+2-seater cruiser in an elegant sport car outfit”—is so far removed from the original meaning of the term and as put into practice by M-Bs of old (such as the SSLK that in Caracciola’s hand won the 1931 Mille Miglia, and at the highest speed yet) as to be “almost insulting.” The new AMG GT, on the other hand, gets it right, and more right than the AMG SLS which is a quite an admission. 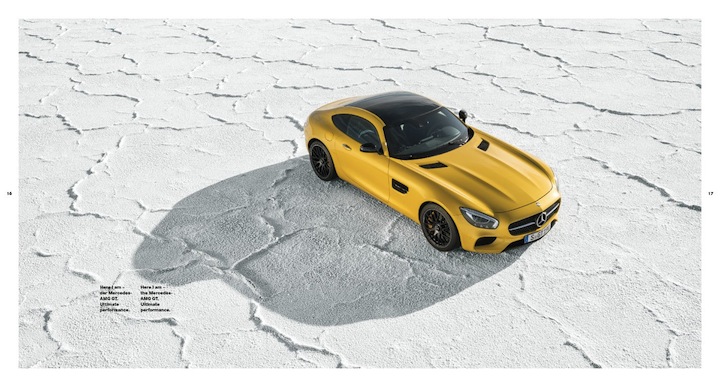 Beginning with a quick recap of the 1931 Mille and the requirement for “a very specific type of vehicle” the story quickly skips to the racing roots of AMG and a 1971–2014 timeline (the year of the AMG GT’s launch) of the firm. The GT is only the second complete car entirely developed by AMG and the book presents the milestones of its development, accompanied by interviews with AMG CEO Tobias Moers and M-B design chief Gorden Wagener. 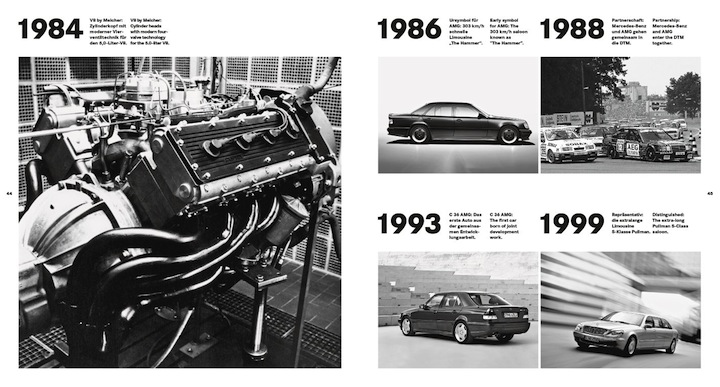 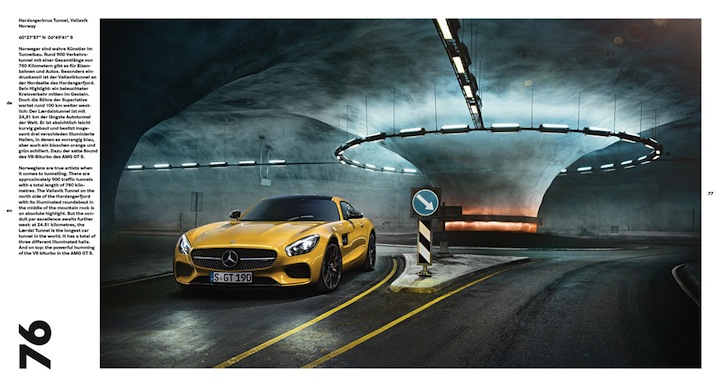 A great many photos here are from the 7000-km test drive in Western Europe conducted in 2013 with several production cars. Photos of this drive and the heavily camouflaged cars did make it into the motoring press in late 2014 but readers with an eye for detail will observe that the cars shown here have some of the camo removed. Also covers the GT3 racing variant. 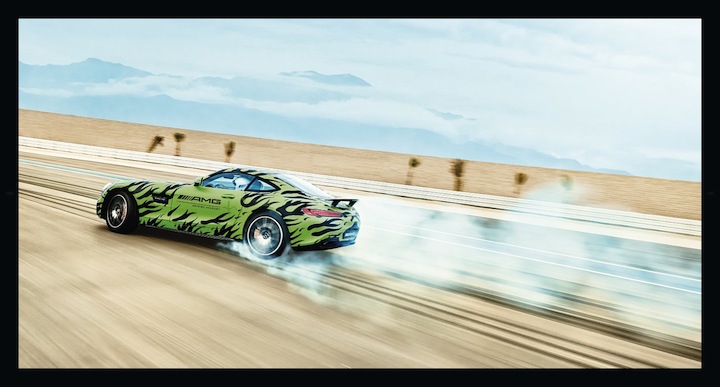 While the text is vague on this, there are also photos of some of the ca. 100 prototype cars (look for different grille, intake, headlamp treatments etc.) that some 50 test engineers wrung out over hundreds of thousands of miles all over the globe. This goal of putting a zero-fault product into customers’ hands demonstrates just how serious AMG, and M-B take this model. No matter where you stand in the AMG GT vs. Porsche 911 debate (doomed to be as meaningless and circuitous as any such comparos), the book is a fine testament to the people who put their soul into making a memorable, distinctive, and distinguished Grand Touring car for discriminating buyers. 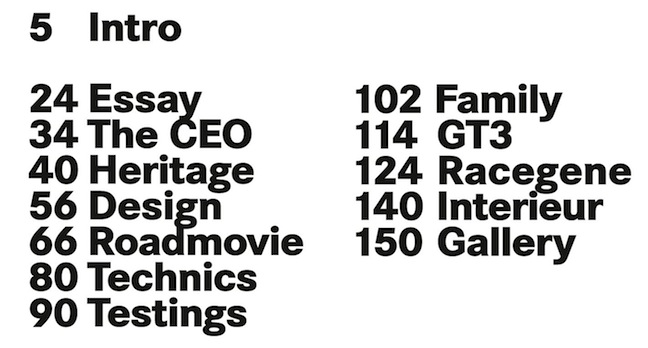 As all books in this vein by this publisher and this lead photographer/writer, the GT book is bristling with strong design elements, top-notch production, and intense photography.

Mercedes-AMG GT, A Star Is Born