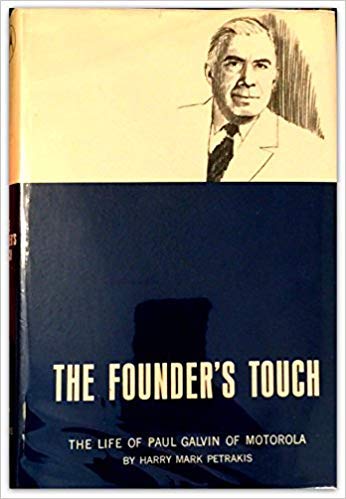 Neither of these are new books. But each is so well written and tells its aspect of the overall history so well that SpeedReader followers deserve to know about them—especially as both books are readily available today thanks to Amazon and its book dealers/sellers.

Collectively the books tell the story of Motorola which was the first company to solve the problem of a car’s ignition interfering with the radio, then only AM of course, so it could play clearly without static. Thus the company, then known as Galvin Manufacturing Corporation, became one of the first, if not the first, to successfully make, market, and install car radios in quantity. The radios bore its own coined and trademarked name, Motorola. 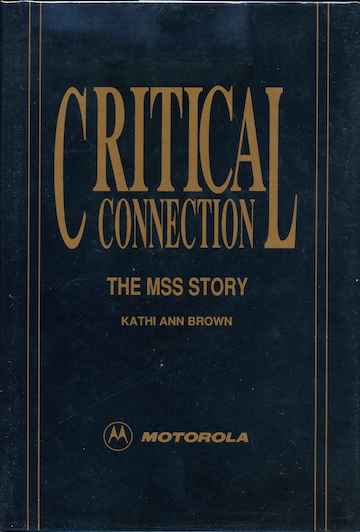 The Founder’s Touch is the biography of the man who founded the company as the subtitle indicates: The Life of Paul Galvin of Motorola. The “companion” book, published when the biography of Galvin was already into its third printing, focuses on the partnerships that Motorola formed in order to provide in-house service without increasing its workforce or having to establish Motorola-owned satellite offices.

As the reputation of its Motorola radios grew, the corporation renamed itself. Then it devised an unusual and uncommon methodology to better serve its customers. From his company’s earliest days Paul Galvin had discovered with each new installation—first of those radios in cars and then as he developed the two-way radio systems—that the ability to service the customer/purchaser worked best when someone local to the installation was engaged. So he formulated a “partnering” approach calling his company’s designated/certificated partners Motorola Service Stations.

Kathi Ann Brown, the author of Critical Connection, The MSS Story interviewed owners and employees of those independent partner businesses that are scattered from coast to coast/border to border, and learned The MSS Story firsthand. Some of the stories she shares in the book make the reader chuckle, even laugh out loud; others are sobering; others are the stuff of heroism—all are interesting and instructive on what the business of being a Motorola Service Station was like then, and still is very much like to this day.

Paul Galvin’s path to success was liberally littered with setbacks, near failures, and challenges. Just as Galvin’s approach to the need for installers and service people in markets other than his and Motorola’s home base Chicago was unique, he often demonstrated what today we call “thinking outside the box”.

Persuading a University of Connecticut professor to leave the academic world and come to Chicago was one of them. Dan Noble was truly an academician, not at all interested in business. But he was a visionary whose first contributions to Motorola was developing FM, then walkie-talkies which, with WWII on the horizon, turned Motorola into a first-tier war materials supplier. Postwar Noble turned his attention to television, followed by replacing tubes with semi-conductors, transistors, and more. Technological advances moved quickly and Noble, encouraged and supported by Galvin, enabled Motorola to move with the times.

The Founder’s Touch also introduces the reader to Galvin’s family and his personal life. And it is all every bit as engaging reading as the business aspects.

Then Critical Connection picks up the narrative. Following a few pages summarizing partner Motorola’s formation, its growth and equipment, individual MSS owners describe experiences from their perspective. Most hair-raising are ones involving the construction of, then later servicing/maintaining the transmission towers, especially those in excess of 200 ft tall. By their nature towers are often in difficult to access backwoods and elevated areas so getting there is often part of the adventure especially in the winter.

The entire book is fast-paced interesting reading—even those “the business of business” segments one would normally think might be dull. As an example in the words of one MSS owner, “We probably have the least legal relationship…with partner Motorola. We have a one-page document.” Another one of the over 800 MSS owner’s observes, “I think the reason the relationship between Motorola and the MSS has been successful has been that [each] MSS has been able to operate as an entrepreneur…Yet he can still work with a corporate entity that is highly structured, because they have allowed him, within reason, enough areas that he can do his own things without stepping on their toes and they in turn stepping on his.”

From Paul Galvin, along with his buddy Bill Lear (yes, that Bill Lear who would go on to create his own company and the Learjet), figuring out how to modify and install a static-free AM radio in an automobile all the way to developing and installing complete 911 systems and servicing them all, there’s a fascinating story in these two books. And both are populated with interesting, independent individuals a reader will enjoy learning about.

The Life of Paul Galvin of Motorola

ISBN: none but there is an Library of Congress number/filing of 91 73592

Posted Under: Technology | Author: Helen Hutchings | No comments yet