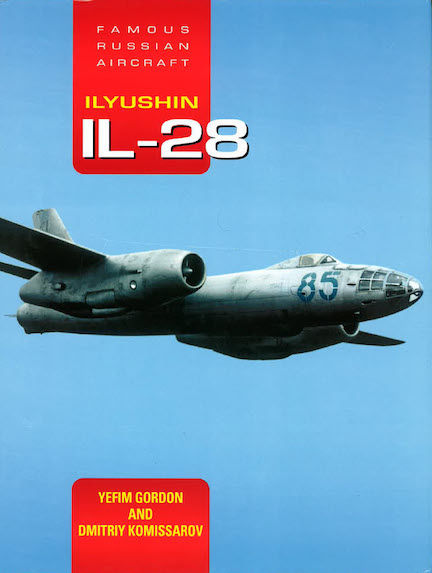 “The situation was singularly unpleasant for the Soviet union, which was lagging behind—the USA and the UK already had practical jet aircraft at the end of the war; now was the time to catch up. This was all the more important because, having hardly emerged from a ‘hot’ war, the erstwhile allies were rapidly drifting apart and becoming adversaries in the Cold War.”

Of the half dozen or so decent monographs (in English) about the “The Russian Canberra” this one is easily the most thorough, no surprise considering who wrote and published it. The names of authors Gordon and Komissarov have come to be almost a brand, as is the publisher, Hikoki. This is no. 11 in their “Famous Russian Aircraft” series. 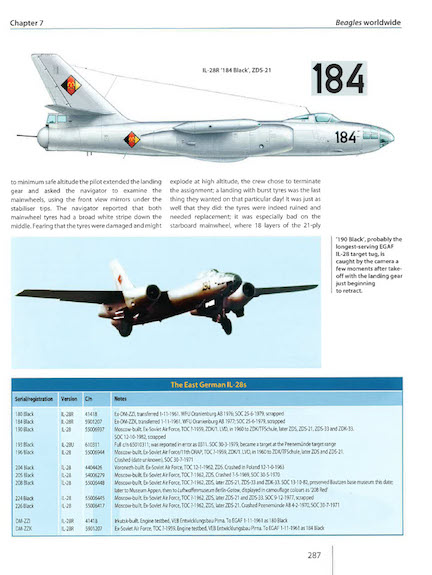 If the author and title combo sounds familiar you’ve obviously had the Beagle on your brain for a while; it was 2003 that G+K published one of their smallish books for Airlife, Ilyushin Il-28 Beagle: Light Attack Bomber (ISBN 978-1840373516).

Readers new to this utilitarian, competent twin-engine jet bomber (also trainer, mail carrier, tanker, and all-around testbed for all sorts of gear) may need a reason to become interested in this machine, so here are a few: 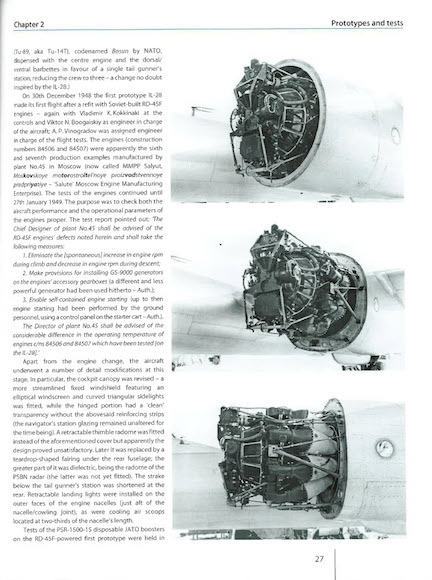 Moreover, this machine represents the early stages of postwar Soviet thinking in jet propulsion for mass-produced aircraft and thus it is singularly significant in the context of what all the other air powers were developing concurrently. With all this in mind, and considering that at 336 pages and “only” 500 illustrations this book is among the shortest in the series, one is almost tempted to say it could have been longer.

Be that as it may, the book is bristling with facts and specs and tables and drawings and photos. Entitling chapter 1 “Breeding the Beagle” is a clever nod to the IL-28’s NATO reporting name. There are other lighter moments too amidst all the granular detail and technical minutia such as a 1950s (color!) photo of a Chinese musical group performing on the flight line for the pilots of the People’s Liberation Army Air Force. 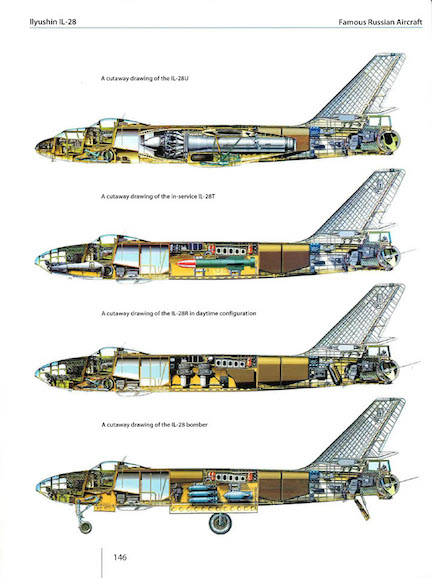 The book begins with the IL-22 and briefly touches upon the very similar but unflown Tu-37 and the never built VM-24 before going into detailed discussions of the prototypes, series production, and an almost 100-page-long look at variants followed by descriptions of components and assemblies often based on the official manuals which are also often quoted. The last two chapters deal with operational issues which are followed by several pages of b/w line drawings of aircraft profiles highlighting specific features. While meticulously captioned, a reader is pretty much on his own to locate the specific bits in the drawings which requires some understanding of aircraft architecture or fittings. Modelers, naturally, will be delighted by this sort of thing, not to mention the almost 100 color profiles scattered throughout out the book. (There is also a 2015 book of 1:72 and 1:48 scale plans, Ilyushin Il-28 published by MMP, ISBN 9788363678777.)

From the layout of crew stations to tire dimensions, everything is covered. As they do so often, the authors manage to dispense quite a lot of ancillary information as well, such as the peculiarities of the Soviet serial number conventions or how the design offices work.

Once again, there is an Index, most welcome and not present in all previous books.

by Yefim Gordon and Dmitriy K