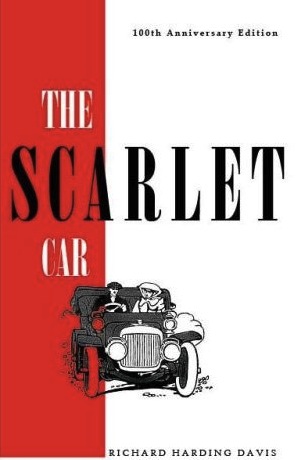 You know about, have perhaps even read, The Scarlet Letter. Also, perhaps, the play-turned-novel that took the world by storm, The Scarlet Pimpernel. But how about The Scarlet Car? This slim book first published in 1907 is certainly among the very earliest motoring stories.

Ironically The Scarlet Car has more in common with the other two “scarlets” than just the color word in the title. All three stories, with the oldest being Nathaniel Hawthorne’s The Scarlet Letter which he wrote and published in 1850, revolve around a strong, independent-thinking central female character. But, of course, only one features the automobile as a main focus—and this scarlet vehicle occupying no less prominent a position than the title role.

The readability of the book is no surprise when one learns of Richard Harding Davis’ background, education, profession and experiences. Davis’ life is described with terms like flamboyant and swashbuckling. He was a reporter from the front during the Greco-Turkish, Boer, and Spanish-American wars. During the latter he was present when Teddy Roosevelt and his Rough Riders stormed San Juan Hill and, of course, told the story as he’d witnessed it in print. As an editor for Harper’s Weekly, a contributor to Vanity Fair, plus corresponding newspaper reporter, he had the forums. Additionally he expressed his creativity authoring short stories, full-length books, and stage plays.

Although The Scarlet Car is set in another time, such is Davis’ skill that the reader is immediately drawn into the story and the era. The characters and events come to life, jumping off the pages and into your mind even as you read. It is the sort of book that you can—and want—to devour in one sitting.

Enhancing and further drawing you into the story are the illustrations created by Frederic Dorr Steele just for the book. You may not instantly recognize Steele’s name but you’ve likely seen his work as he illustrated the Sherlock Holmes stories and is said to be responsible for our mental image of Holmes with his ever-present calabash pipe and deerstalker cap. Steele excelled at communicating life through his illustrations—of man, beast, woman and car—as the eleven drawings in this book prove.

The make or model of the title’s scarlet car is never revealed nor, in truth, is it ever a matter of concern to us. We are along for the ride as passengers who accompany the spirited and bright young woman, her beau, her brother and her brother’s best buddy on a weekend jaunt. It would be cruel to tell you too much about the story as it is best enjoyed when the surprising turn of events and ending are just that—real surprises.

Discovering the delightful tale from the imagination and pen of a master of his craft of word-smithing is the joy of reading The Scarlet Car yourself. And, given that this reprinted softbound was accomplished in observance of the centenary of its original printing, it could be viewed as a peek back at the beginnings of “things automotive” too.